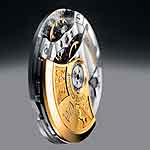 In this in-depth profile from the WatchTime archives, discover how Audemars Piguet brought its manufacture movement, Caliber 3120, to life, from concept to finished caliber, and see behind-the-scenes photos of Audemars Piguet watchmakers at work assembling the movement.

From the initial sketch in 1998 to serial production in 2003, Audemars Piguet created its Caliber 3120 entirely in-house. While the historic brand’s fame has been based for many decades on complicated timepieces, most of these used calibers that date from the years when Audemars Piguet (AP) held a 40% share in Jaeger-LeCoultre. AP sold those shares to the Richemont Group in 2000, and the big investments made since then have been used to finance expansion of AP’s two factories in Le Brassus (AP’s historical headquarters) and Le Locle (AP Renaud & Papi).

The watchmakers Dominique Renaud and Giulio Papi worked at AP before founding their own business in 1986, with the intention of making reliable movements, especially skeletonized ones, for other manufacturers. However, the ensuing flood of orders from renowned watchmaking businesses soon exceeded the capacities of the two young watchmakers and their movement factory. In the 1990s, the duo approached their former employer as a potential investor. AP not only obliged them; it also purchased the lion’s share of the Renaud & Papi factory, which it renamed Audemars Piguet Renaud & Papi. Audemars Piguet currently owns 78.4% of the company, Papi owns 20%, and its managing director Fabrice Deschanel owns the remaining 1.6%. It employs 180 people and produces watch  movements from the initial idea to the finished complications. Two thirds of these calibers bear Audemars Piguet’s insignia. Assembly begins with the plates, each of which
is individually numbered.

Caliber 3120 might not seem very special at first glance. It’s a movement for a three-handed watch with stop-seconds function and instantaneously jumping date display. Its diameter is 26.6 millimeters and its height is 4.26 millimeters. It contains 40 jewels and 278 individual parts. The balance’s frequency is 21,600 semi-oscillations per hour and the power reserve is 60 hours. Sixty hours of power isn’t unusual these days, but Caliber 3120 achieves this feat without relying on two barrels. Instead, the longevity derives from the movement’s optimized power-decline curve, which results from a modified mainspring and from changes in the barrel and the gear train’s transmission ratio. A computer measures the anchor and escape wheel to a tolerance of 1/100 mm.

The date mechanism is unusual, too. It’s equipped with a safety system that prevents the date disk from blocking if the owner tries to manually reset the date at midnight. Thanks to this feature, the display can be manually adjusted at any time without jeopardizing its delicate underlying mechanisms. If the date display is allowed to move on its own, it will automatically and instantaneously jump ahead to show the next date precisely at midnight. Before Caliber 3120 is assembled, the individual parts are decorated; here, with circular graining.