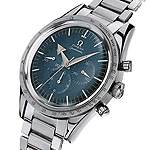 In its long history, Omega has contributed numerous important watches and innovations to the world of watchmaking. In this excerpt from our “Omega Milestones” E-Special, we chronicle seven of the 25 most important watches Omega has ever made. For the complete E-Special listing all 25, click here to download it from WatchTime’s online store.

The world’s first minute-repeater wristwatch was unveiled in September 1892 by the Bienne, Switzerland firm of Louis Brandt & Frère, precursor to today’s Omega watch company. Brandt had chosen Audemars Piguet in Le Brassus to modify a 13-ligne Lépine ébauche that Audemars had purchased from the ébauche maker LeCoultre & Cie. The striking mechanism was triggered by a slide at 3 o’clock. The complex wristwatch case strongly resembles that of a pocketwatch. Engraved on the dust cover is a phrase in French that translates as “Excluded from the competition: juror, Paris 1889.” The engraving suggests that the watch had been exhibited at the Chicago World’s Fair in 1893, but had not been allowed to participate in the competition for medals because César Brandt, who ran the firm with his brother Louis-Paul, had served on the jury of the Paris World’s Fair in 1889. The first wristwatches bearing the Omega name were produced in 1900 and used by British officers in South Africa’s Boer War (1899-1903). Omega was one of the first firms to begin serial production of wristwatches. The watches withstood the rough treatment they got. An Omega advertisement in a watchmakers’ magazine in Leipzig in 1904 publicized the testimony of a British artillery officer whose Omega wristwatch performed admirably in bitter cold, searing heat, torrential rain and merciless sandstorms. The lieutenant colonel concluded that “The wristwatch is an essential campaign element.” The wristwatches were powered by a Lépine 12-ligne Caliber HN B and were available in two versions: one with the crown on the right, to be worn on the left wrist, and the other with the crown on the left for wearing on the right wrist.