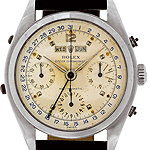 Ever since the revival of mechanical wristwatches in the 1990s, brands are eager to re-launch some of their successful models from the past. This makes total sense, since some of the brands out there have an impressive and interesting history behind some of their watches. The most famous ones are, of course, the TAG Heuer Monaco and Carrera, the Omega Seamaster PloProf, the Jaeger-LeCoultre Deep Sea, more or less all Panerai’s models, and so on. But what about some of these historic watches that have not yet merited a re-edition?

Here are five watches that, in my opinion, would be perfect as the basis for a modern re-edition. They range from watches released half a century ago to watches that have been on the market for only two decades.

(And of course, as always, please use the comment box below to let us know which old watches you would like to see a watch brand re-issue for modern times.)

Longines watches have an extremely interesting history. With its Heritage collection, the brand has managed to re-issue some of its most beautiful vintage watches. Although Longines already has launched the Heritage 1951 chronograph watch and a Telemeter Chronograph, a nice re-edition of its Chronograph Caliber 13ZN would be awesome. This would mean that Longines would have to source and use the old caliber, though. Even though I can imagine a re-edition like that would come with a high price tag, it might still be cheaper than a good-condition, vintage chronograph caliber 13ZN. Remember Don Johnson in “Miami Vice?” Besides wearing a fake Rolex Day-Date, he also used to wear the Ebel 1911 chronograph in gold and steel. That particular model used an El Primero movement by Zenith. This movement was also known as Ebel caliber 134. As you probably know, Ebel’s focus has been more or less on ladies’ watches in recent times. I think Ebel could regain the respect they deserve from a lot of male watch collectors and watch enthusiasts if they would revamp and re-issue the Ebel 1911 Chronograph — but only if they would outfit it with the Zenith El Primero movement again.