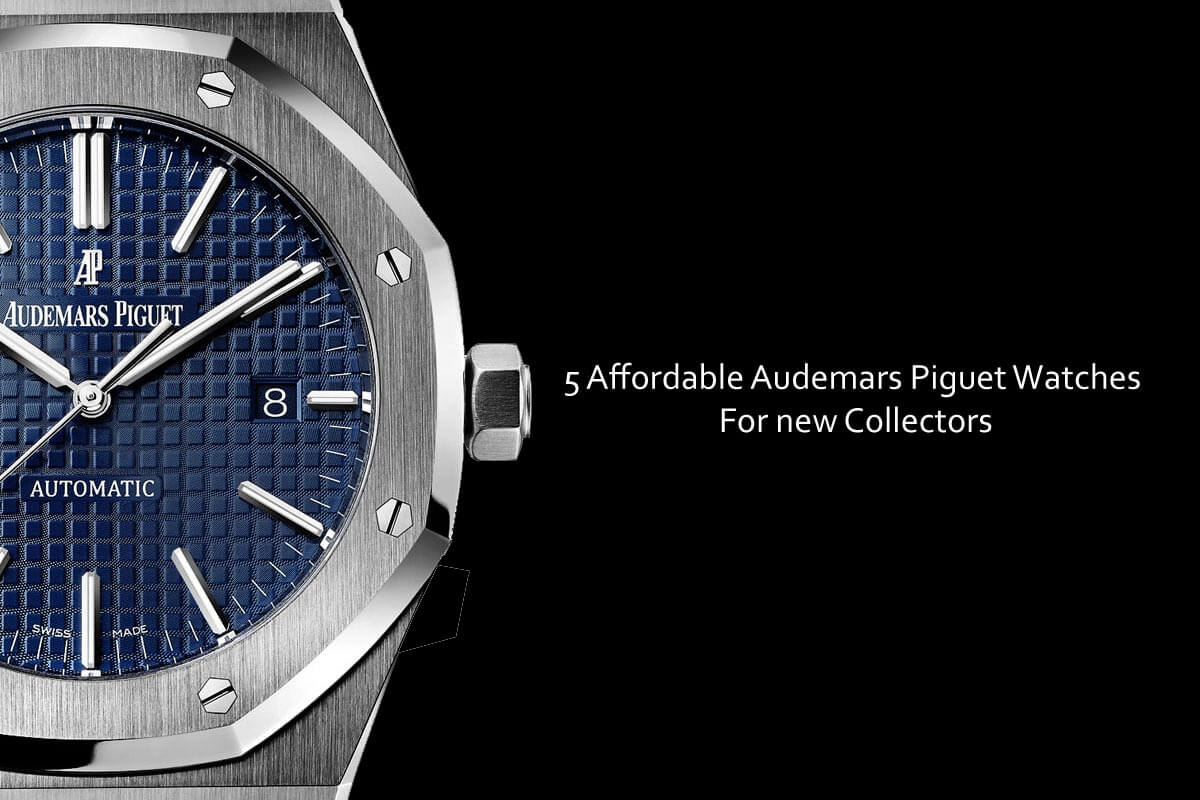 This the sixth installment of our Buying Guide, now focussing on affordable watches from Audemars Piguet. Now you might find that a ‘contradictio in terminis’, especially since the previous five installments about affordable watches from Rolex, Omega, TAG Heuer, IWC and Zenith, we were able to show you watches below 10k. That is something that will be difficult when we’re talking about the brand that is best know for creating the iconic Royal Oak. Here is a selection, made with our colleagues of WatchTime, of five ‘affordable’ timepieces from one of the three grande dame’s of proper High-End Watchmaking, Audemars Piguet.

The word “audacious“ is invoked far too often in the world of watches, and though the Royal Oak may seem tame by today’s standards, it was truly audacious when it debuted in 1972. It was a precious timepiece in a non-precious metal, carrying a luxury price. Over the years, AP left well-enough alone, and the rest, as they say, is history. Today, the Royal Oak stands as a design icon, and it is by far the best known Audemars Piguet collection. 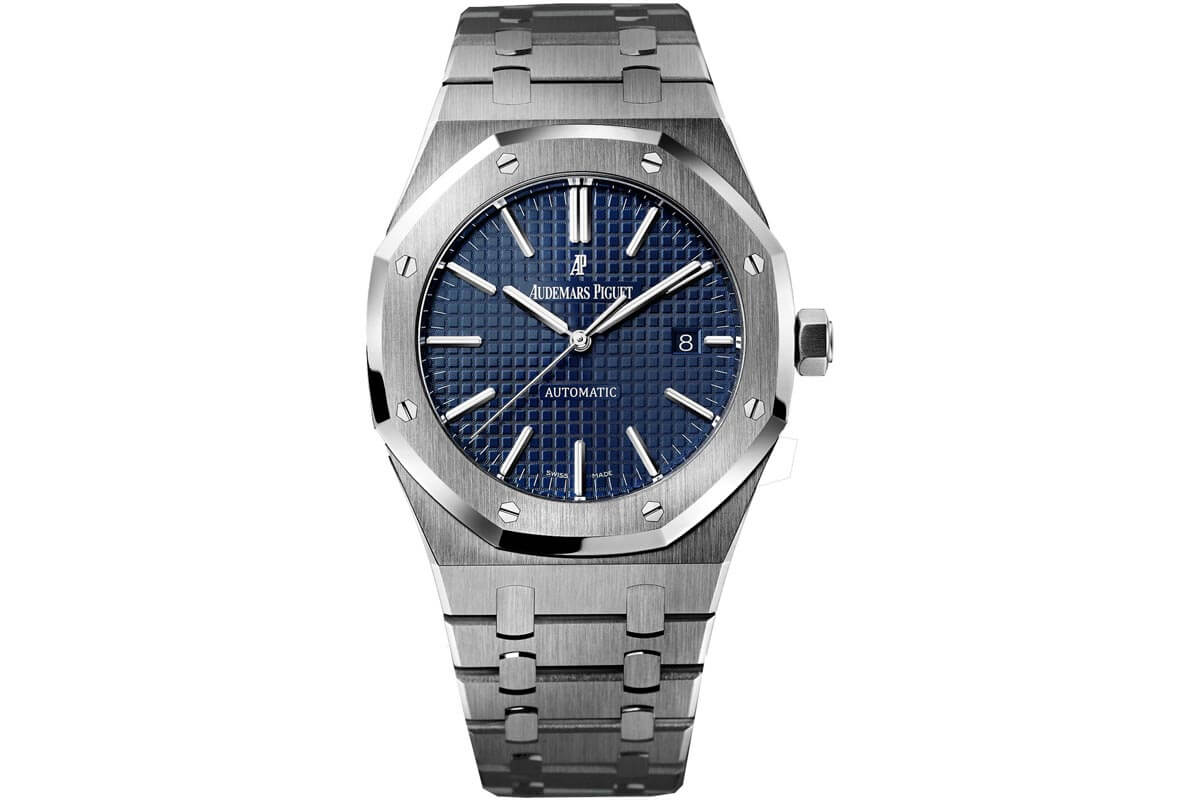 Our featured model, reference 15400, is the largest Royal Oak produced to date. (Even icons have to keep up with the times.) Though at 41 mm, the case would hardly be considered oversize by today’s standards. The blue Grande Tapisserie dial, referred to by some as the “waffle” dial, is perhaps as well-known as the octagonal bezel. Any watch enthusiast will instantly recognize this classic. Beneath the trademark dial ticks the automatic-winding manufacture caliber 3120 with 40 jewels, a solid 22k gold winding rotor, and a 60 hour power reserve.

The Royal Oak Selfwinding in stainless steel is priced at $17,100 USD

If the Royal Oak is an icon, its big brother, the Royal Oak Offshore (“ROO” to those in the know) is a modern sensation. Offshores are Royal Oaks turned up to 11. Today the ROO seems like a natural development, but when the concept was first proposed, it shocked even AP management. Fortunately, the Offshore received a green light, and a new Royal Oak era was born. 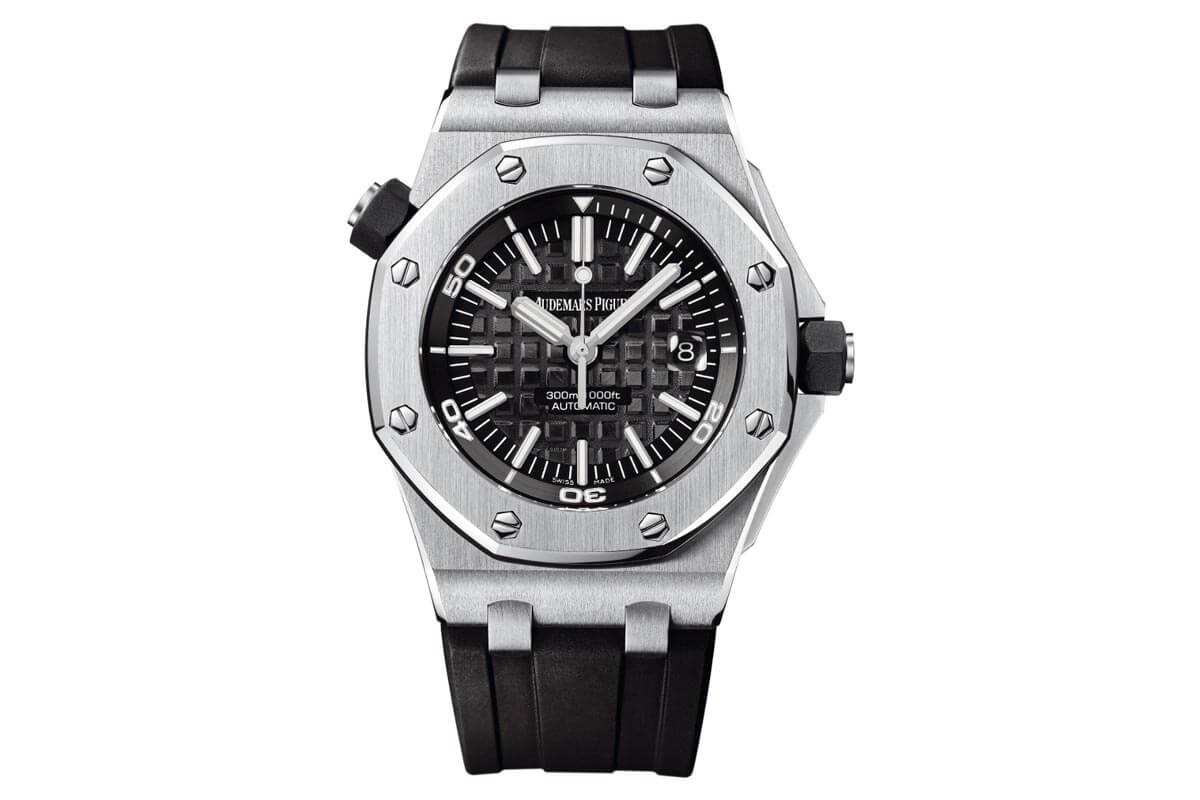 Our featured watch is the Royal Oak Offshore Diver, reference 15703ST, and it is among the most popular members of the Offshore family. It features the “rubber-clad” accents often found on Offshore models, The case measures 42 mm x 13.9 mm and it offers 300 meter water resistance. The crown at 10 o’clock turns the internal bezel with the typical countdown markings. The Mega Tapisserie dial is a larger version of that found on the Royal Oak shown above, and the broad hands offer excellent legibility. The in-house caliber 3120 provides the power.

The Millenary 4101 is Audemars Piguet’s modern spin on the classic dress watch, and like the Royal Oak Offshore, the size and shape of the case instantly set this watch apart. Our featured model, reference 15350ST, measures 47 mm from 9 to 3.

The case may be the first thing that catches the eye, but the movement is the star of the show. Unlike many shaped watches, the Millenary’s in-house caliber 4101 movement fits the case and follows its form perfectly. Though at first glance this may look like a so-called skeleton watch, in fact it is not – no material has been removed from any component to enhance the view. The small dials leave plenty of room to enjoy the traditionally-finished movement beneath, and the sapphire display back offers visual enjoyment from that side as well. 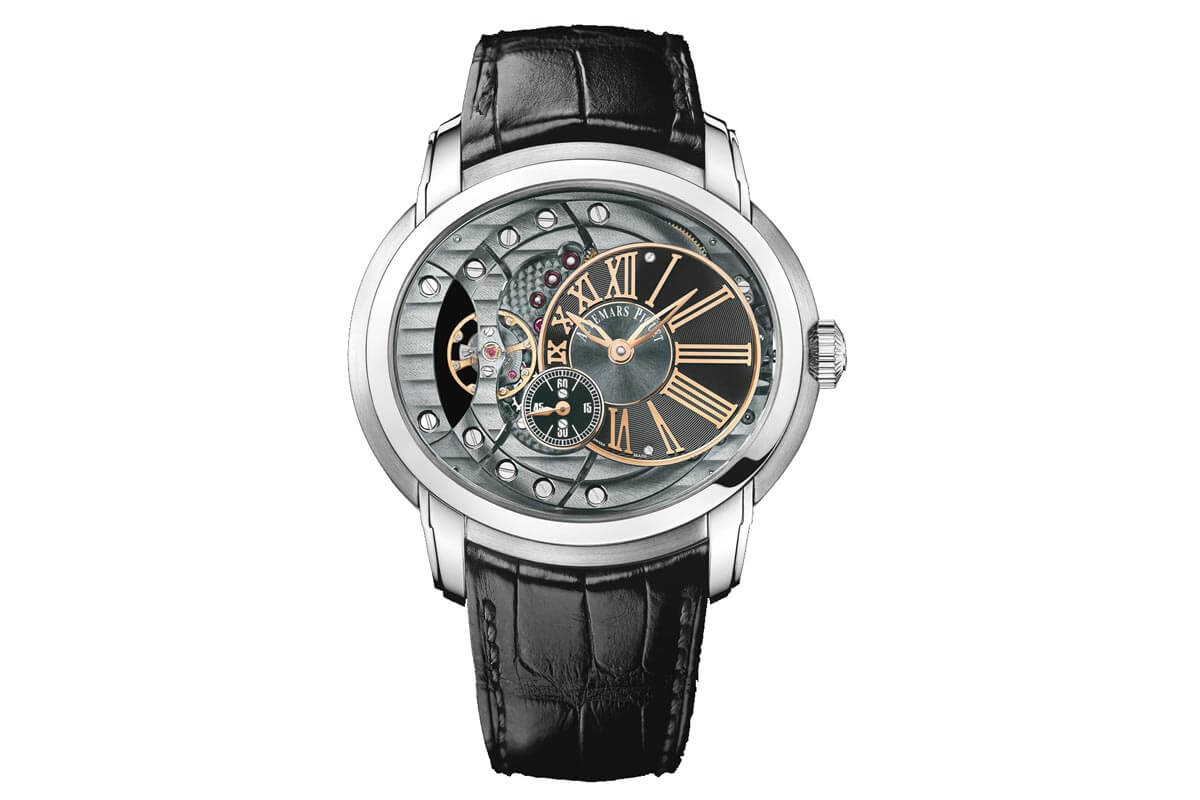 The movement has been designed to create a deep, three-dimensional effect. The construction exposes the freesprung balance at 3 o’clock, and AP has thoughtfully inverted the escapement to improve the view from the dial side. The manufacture caliber 4101 features a solid 22k gold winding rotor spinning on ceramic bearings. Each part of the movement is decorated by hand. These time-consuming operations by highly trained specialists contribute significantly to the cost of the watch. The mainplate wears horizontal Côtes de Genève on the front and perlage, or circular graining, on the back. The bevels and countersinks are polished.

This year Audemars Piguet introduced six new Royal Oak Offshore models, and this is one of the most popular. It’s the ROO Chronograph in a 42 mm x 14.21 mm case with the slate gray “elephant” dial on a gray hand-stitched hornback alligator strap. 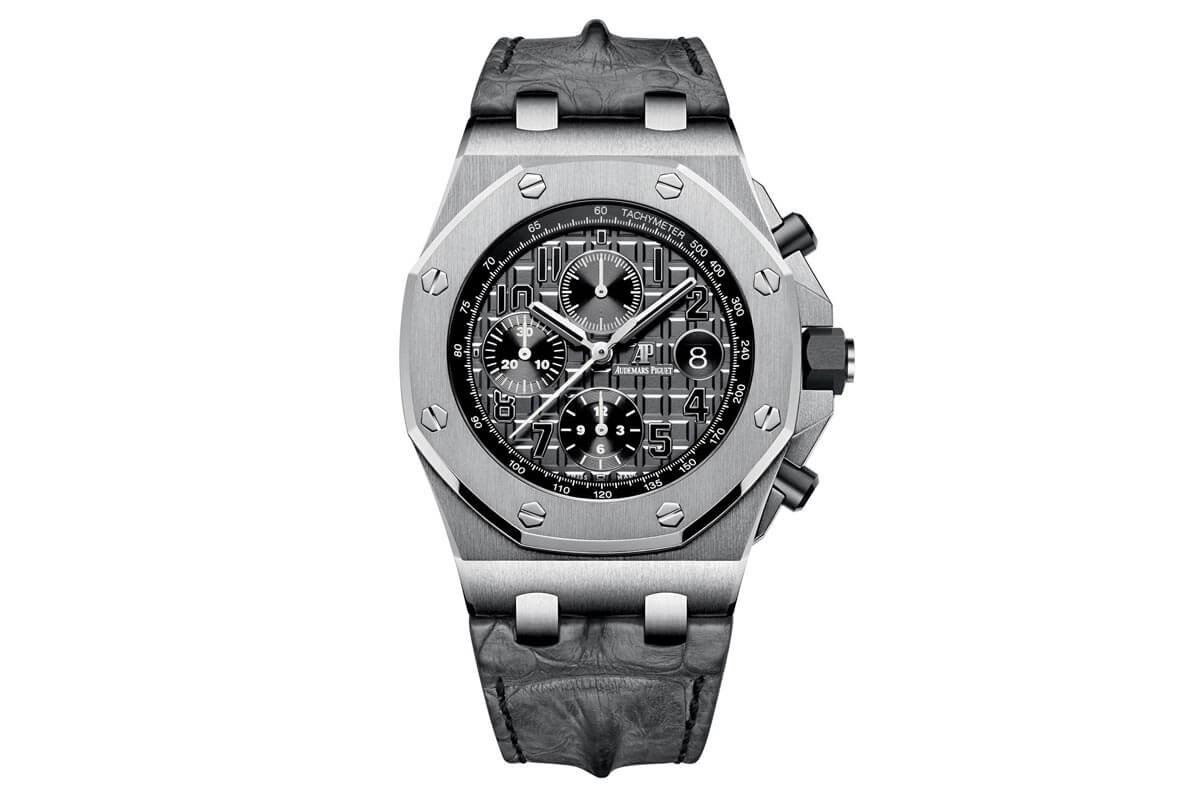 The new collection, which bears reference 26470, incorporates many updates. Rubber accents on the pushers and crown have been upgraded with black ceramic pieces. The new Mega Tapisserie dials have been well received, and the snailed subdials add even more texture. Broader, faceted hour and minute hands improve legibility.

The big surprise is found on the other side of the case: newly added sapphire display backs provide a view of the caliber 3126 chronograph movement with its solid 22k gold winding rotor. This movement features a cam-switching chronograph mechanism and stop-seconds for precise time setting.

If you seek something a bit bolder than the 42 mm Royal Oak Offshore Chronograph shown above, consider its big brother in a 44 mm x 14.13 mm case. This model retains the familiar black bezel, fashioned from highly scratch-resistant ceramic. Large rectangular pushers replace the smaller round pieces found on the 42 mm models. Like the smaller sibling, this model features the Mega Tapisserie dial, here complimented by white gold hands and hour markers. The broad tachymeter at the outer edge of the dial lets you calculate speed over a known distance. 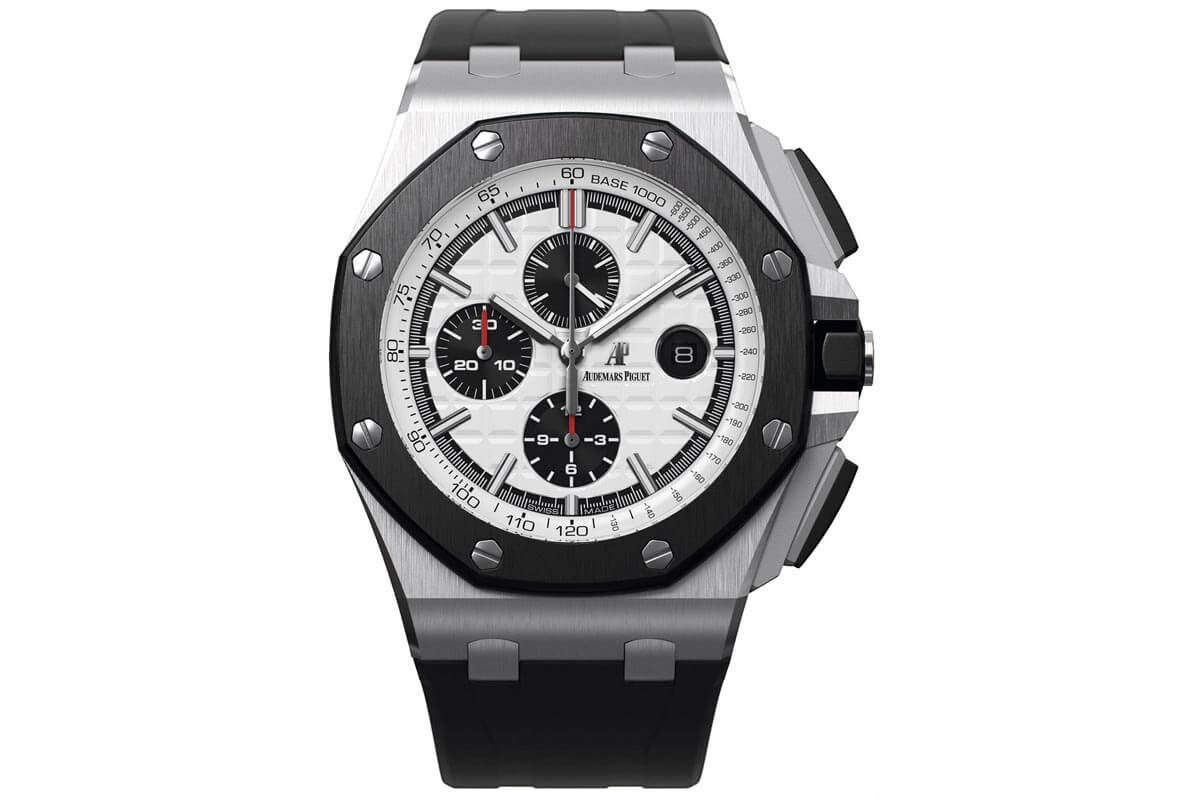 Behind the dial lies the caliber 3126 automatic winding chronograph movement with 365 components. The movement runs at 21,600 vph in 59 jewels. The dial registers include continuous seconds at 12 o’clock., a 30-minute counter at 9 o’clock, and a 12-hour counter at 6 o’clock.

This article was first published by WatchTime (here), updated and republished on Monochrome-Watches with authorization.