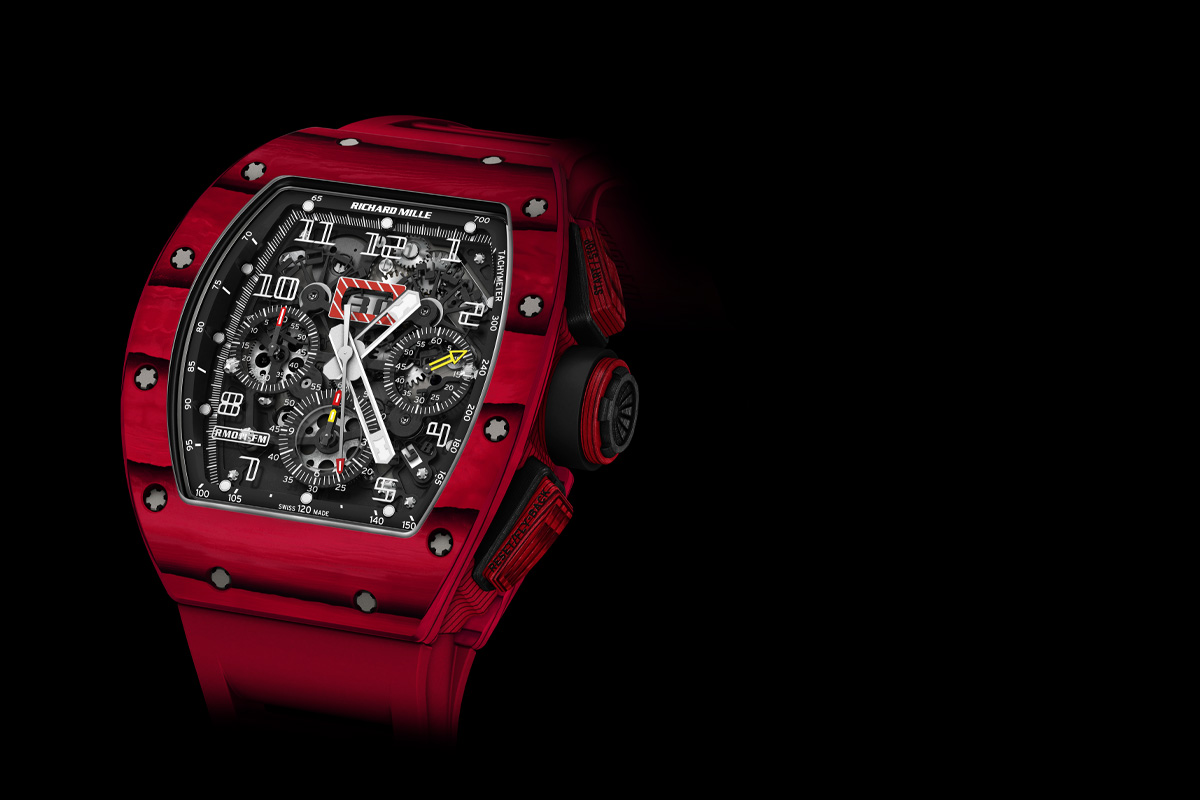 You’ve certainly noticed that the latest creation of Richard Mille is red. Obviously… (except if you are color blind, and we’re profoundly sorry for you). However, you’ve probably spotted something else; the juxtaposition of the words “Quart” and “Automatic“. Wait, is that something possible? Is RM going to lower that much their watches and to have quartz movements? We know the market to be quite difficult these days, but common! Ok, that was just a fear, as the new Richard Mille RM 011 Red TPT Quartz Automatic Flyback Chronograph is a true (and bold) Haute Horlogerie piece, with a real mechanical movement but with a case mixing carbon fiber and layers of red quartz (the material, not the watch technology). Explanations.

As we always tend to say, a bit of humor never hurts. However, the watch in question here and the material used to create its case are far, very far from being a joke. It’s even quite a serious deployment of technology to create the case of the Richard Mille RM 011 Red TPT Quartz. To understand a bit more, we have to get back a few months earlier with another watch introduced by Richard Mille, the kind of crazy RM 27-02 Tourbillon Rafael Nadal. This watch was the first to use the TPT Quartz technology, a mix of materials resulting in a case with a strange black and white gradient and multiple layers. Originally developed to manufacture racing boat sails, this material finds applications in Formula 1 chassis construction, aeronautics…and now watchmaking. After a non-colored version of this material on Nadal’s watch, Richard Mille is now able to apply tinted resins to bring an even bolder design.

This unique black and red appearance comes from a layer construction (over 600 layers in total), alternating quartz and carbon fibers. Richard Mille’s engineers have developed a highly original material known as TPT quartz, composed of hundreds of layers of quartz filaments piled on top of each other. Silica layers are inserted between layers of NTPT carbon (you can read more about this material here) with a positioning system that changes the orientation of the fibers between each layer by 45 degrees. Machining will then reveal the randomly placed layers, creating a unique look for every watch. After a first try on the RM 27-02 Tourbillon, Richard Mille now adds an intense red resin to the TPT Quartz, revealing a two-tone case, where the black fibers of carbon alternate with the bright red layers of TPT Quartz.

For the rest, the Richard Mille RM 011 Red TPT Quartz remains technically a RM 011, meaning that it features an automatic flyback chronograph with oversized date (using two separated discs), a month display at 4 o’clock, a power reserve of 55 hours delivered by a double barrel system wound by a variable-geometry rotor, plates and bridges machined from grade 5 titanium (visible from the skeletonized dial) and the usual flyback chronograph with a countdown function. The case remains faithful to the Richard Mille tradition, with a tonneau shape and the 12 titanium spleen screws (you can read more about the Richard Mille RM 011 here and here). To finish the look, the red RM 011 comes on a matching red rubber strap (that you can always exchange later with a black one if there’s too much red for you).

The Richard Mille RM 011 Red TPT Quartz will be a limited edition of 50 pieces, only available at the Richard Mille boutiques. No words on the pricing yet but expect a price over 200,000 Euros.