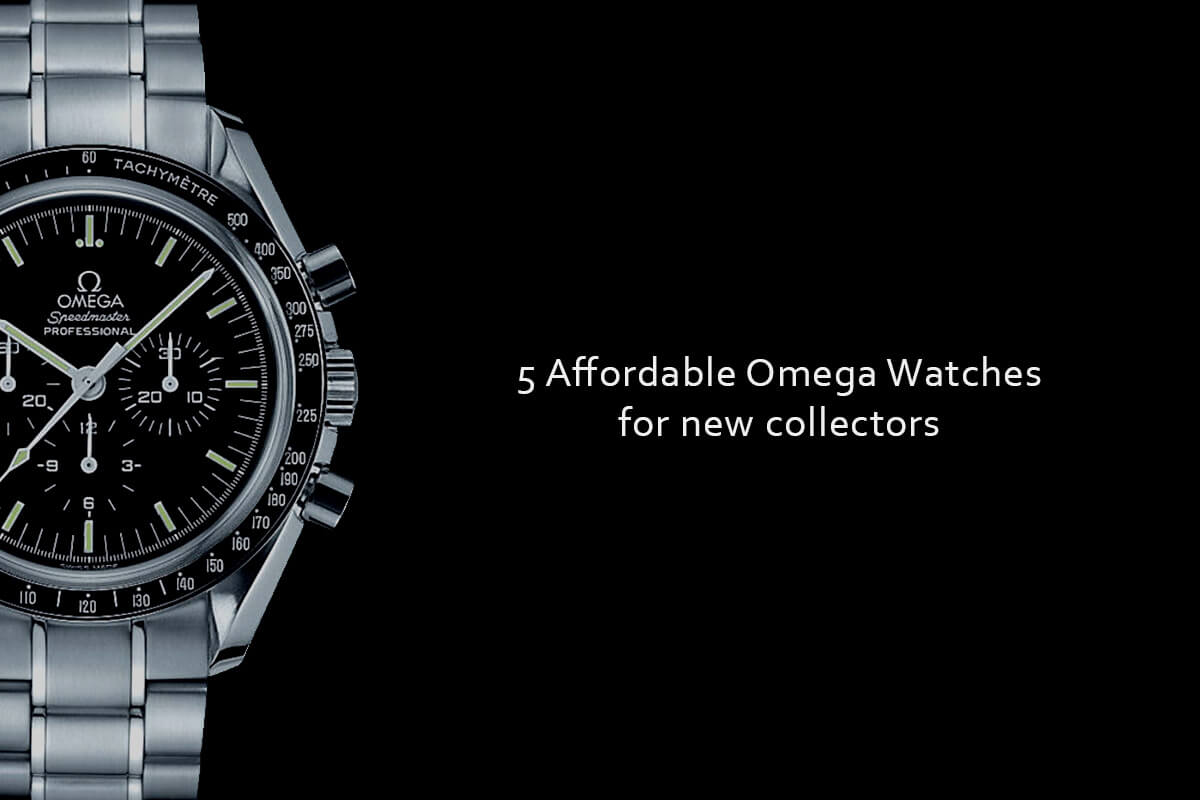 Omega has produced numerous iconic timepieces over the years, including perhaps the world’s most famous chronograph, known around the world as the Omega Speedmaster Professional Moonwatch. Omega was the watch worn on the moon, the watch that helped astronauts to go back alive on Earth during Apollo 13, the watch worn by the most famous secret agent, a.k.a James Bond 007 and a legend for divers. Here are five models that are in stores now at accessible prices for both new and seasoned collectors. In order to help you to find your vey first Omega, here are five popular editions that are in stores now and that offer accessible (for Omega, that is) prices for collectors of all ages, selected together with our colleagues of WatchTime.

Launched in 1957, the Speedmaster is synonymous with spaceflight and adventure. Like most great icons, the design has changed little across the decades, meaning that today, the Moonwatch is recognized the world over. It features a distinctive black dial covered by a hesalite crystal with trademark thin hour and minute hands, a small seconds subdial, 30-minute and 12-hour recorders, and a characteristic central chronograph seconds hand. The black bezel, with its tachymeter scale, is mounted on a 42-mm stainless steel case that is water-resistant to 50 meters.

At the heart of this chronograph is Omega’s mechanical caliber 1861. Though this hand-wound movement has been upgraded several times over the years, it remains essentially the same as the one that powered the timepieces that accompanied NASA astronauts on six trips to the moon. 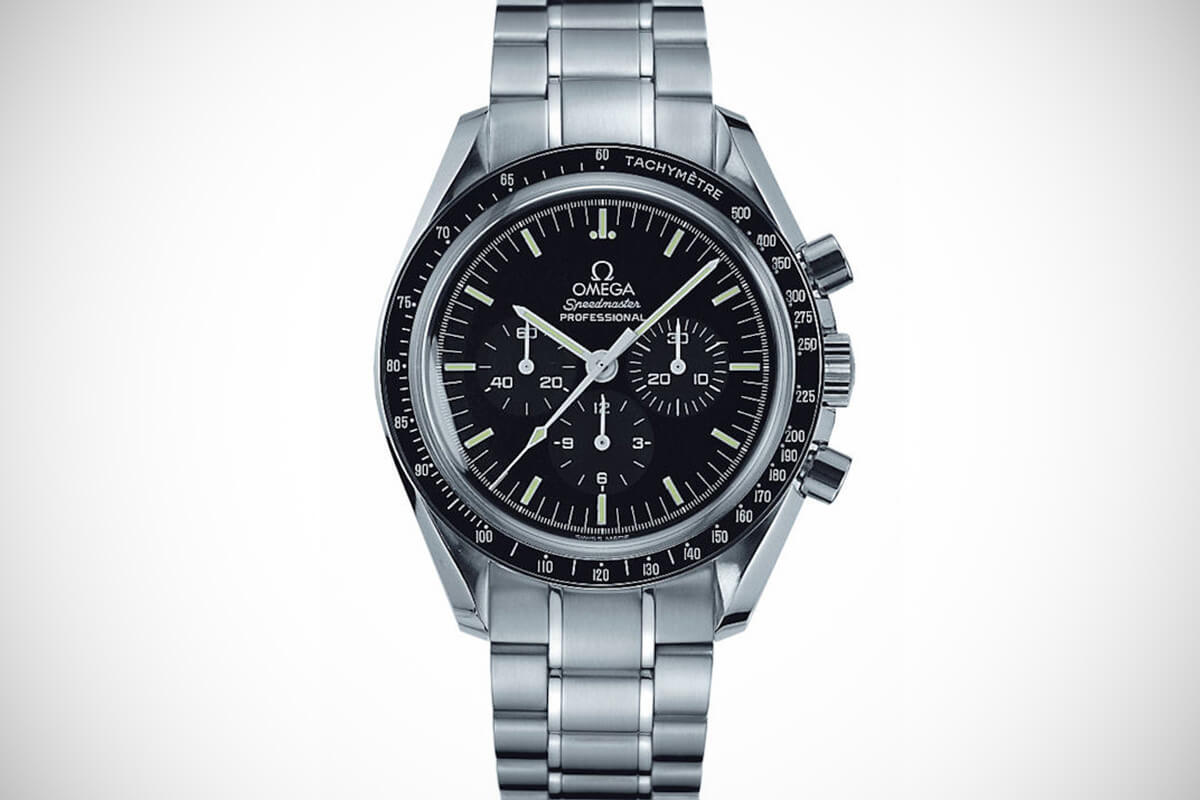 The Moonwatch is available on a strap or a bracelet. Each watch is offered with a special presentation box that includes two additional straps – a “NATO” strap and a black Velcro strap. Also included are a tool to change the straps, a Speedmaster loupe, and a book highlighting the adventures of the Speedmaster.

The Omega Speedmaster Moonwatch Professional is priced from 4.200 Euros, making it a very good value among new chronographs.

Omega launched the Constellation family in 1952, though in the United States, the collection was originally known by the name Globemaster, due to a trademark conflict that was resolved in 1956. By the way, the Globemaster had just been re-issued this year, with a design faithful to the early editions.

The dome of the Geneva Observatory served as the family crest, as Omega had just broken its own precision timekeeping record there the prior year. The cupola was surrounded by eight stars representing Omega’s greatest chronometric achievements at the world’s observatories, including the 1931 “clean sweep” at the Observatory of Geneva in which Omega broke the record for precision in every category.

In 1982, Omega launched the Constellation “Manhattan.” This watch introduced the four now-familiar “griffes,” or claws at 3 and 9 o’clock, which originally held the sapphire crystal in place and helped ensure the watch remained waterproof. 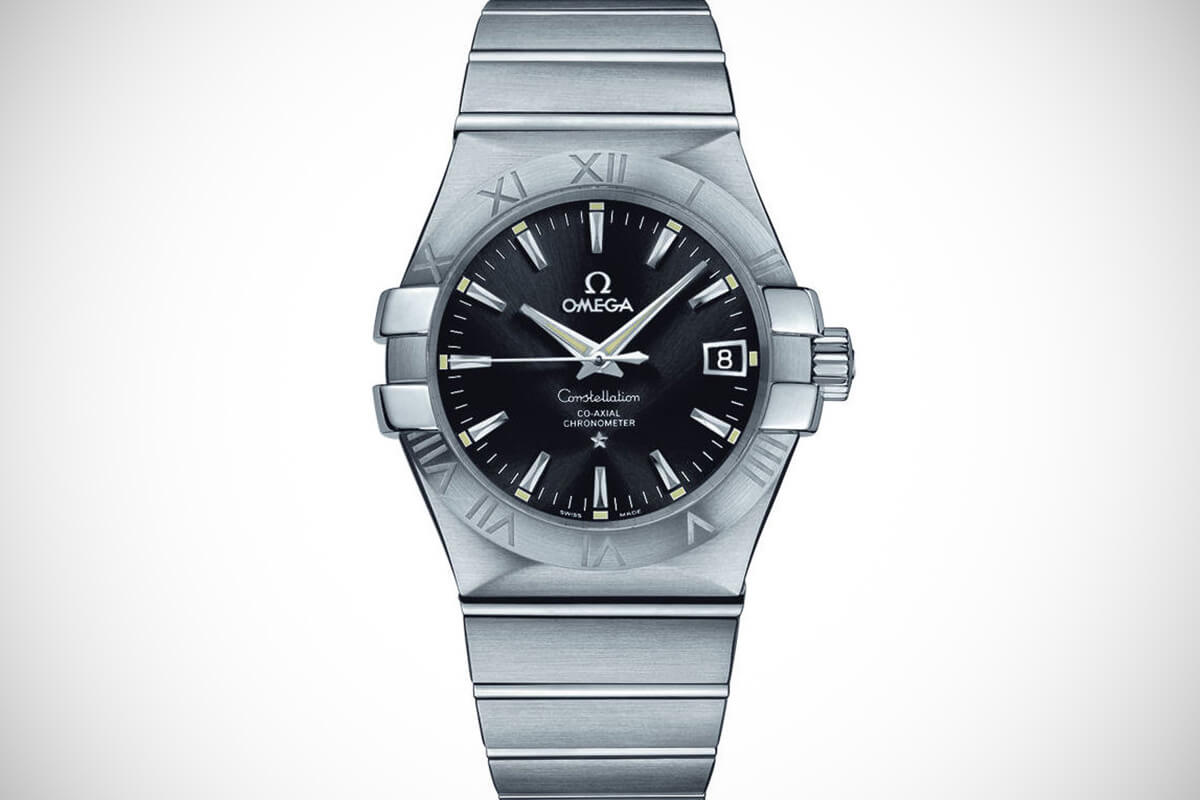 In 2007, Omega introduced its proprietary Co-Axial calibers with new and unique escapements offering less friction, greater mechanical efficiency, and excellent chronometric performance over time. The performance of the new escapement is such that each Omega timepiece fitted with a Co-Axial caliber is a COSC-certified chronometer delivered with a full four-year warranty, which is one of the best in the business for a mechanical timepiece. The exclusive movement is housed in a 38 mm case with a sapphire caseback and 100-meter water resistance.

The Omega Constellation Co-Axial is priced from 4.700 Euros.

The Seamaster Aqua Terra is a robust timepiece with clean, distinctive lines. The dials of the Aqua Terra 150 M collection recall the beautiful wooden decks found on the finest luxury sailboats. The example shown below features a lacquered silver dial decorated with the Teak Concept pattern. The 18k gold seconds hand is complimented by deep blue, faceted hour and minute hands.

The stainless steel 41.5-mm case holds the best feature: an Omega Master Co-Axial caliber 8500 COSC-certified chronometer movement which is specially manufactured to resistant magnetic fields greater than 15,000 gauss. Unlike most antimagnetic watches, the Aqua Terra’s movement can be viewed through a transparent caseback. 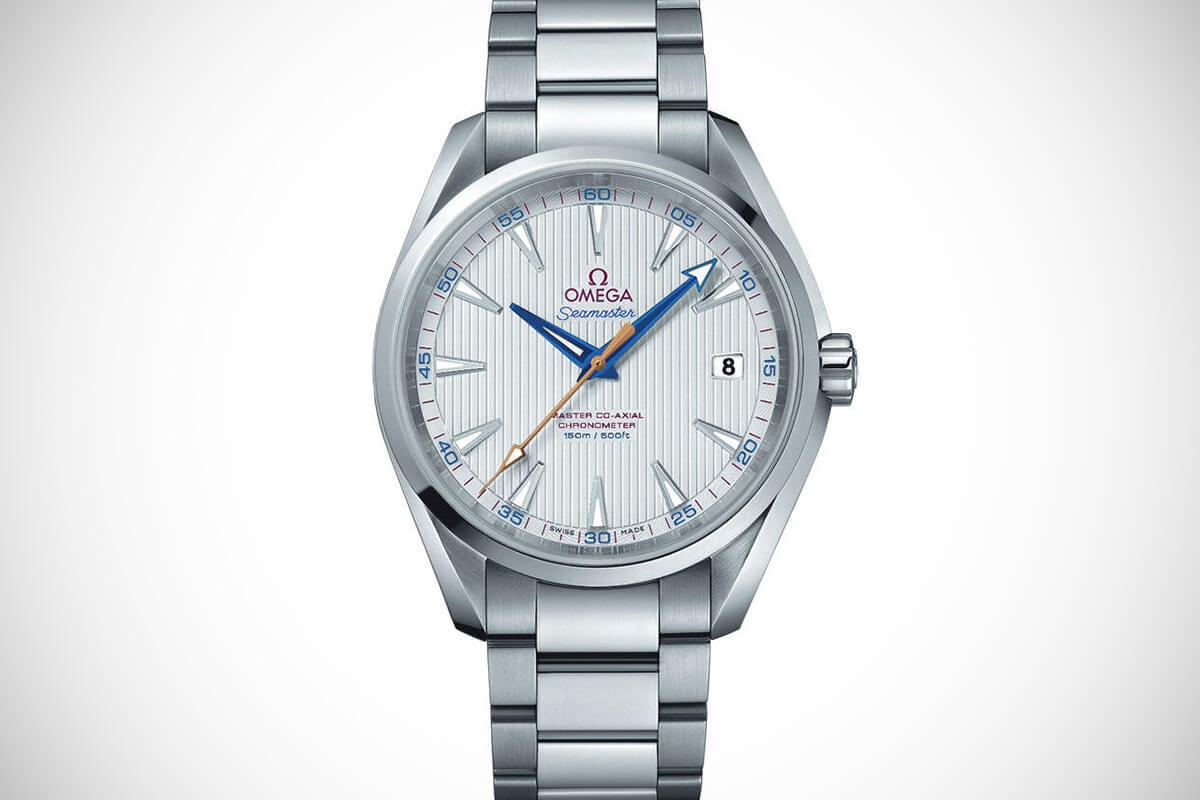 Several brands offer mechanical watches with movements protected by antimagnetic inner cases. Omega improves on that design by fashioning key movement components from non-ferrous materials, making the movement itself impervious to magnetic fields. This feature is especially important today, as we encounter magnets more than ever, from smartphone and tablet cases to briefcase closures and refrigerator doors.

Omega is at least as well known for performance under the seas as it is for performance in space, and indeed, the brand was a pioneer in both realms. In 1932, Omega launched the Marine, recognized by many as the first watch designed from the ground up (or from the surface down) to be used on deep dives. Since those early days, Omega timepieces have accompanied many explorers on their journeys into the deep. Marine biologist and explorer William Beebe wore an Omega Marine during his record-breaking bathysphere dives, as did Commander Yves Le Prieur, the inventor of Scuba. Jacques Cousteau famously wore an Omega Seamaster PloProf, and Jacques Mayol – the renowned freediver known as The Dolphin Man – also sported an Omega Seamaster on his record-setting dives. 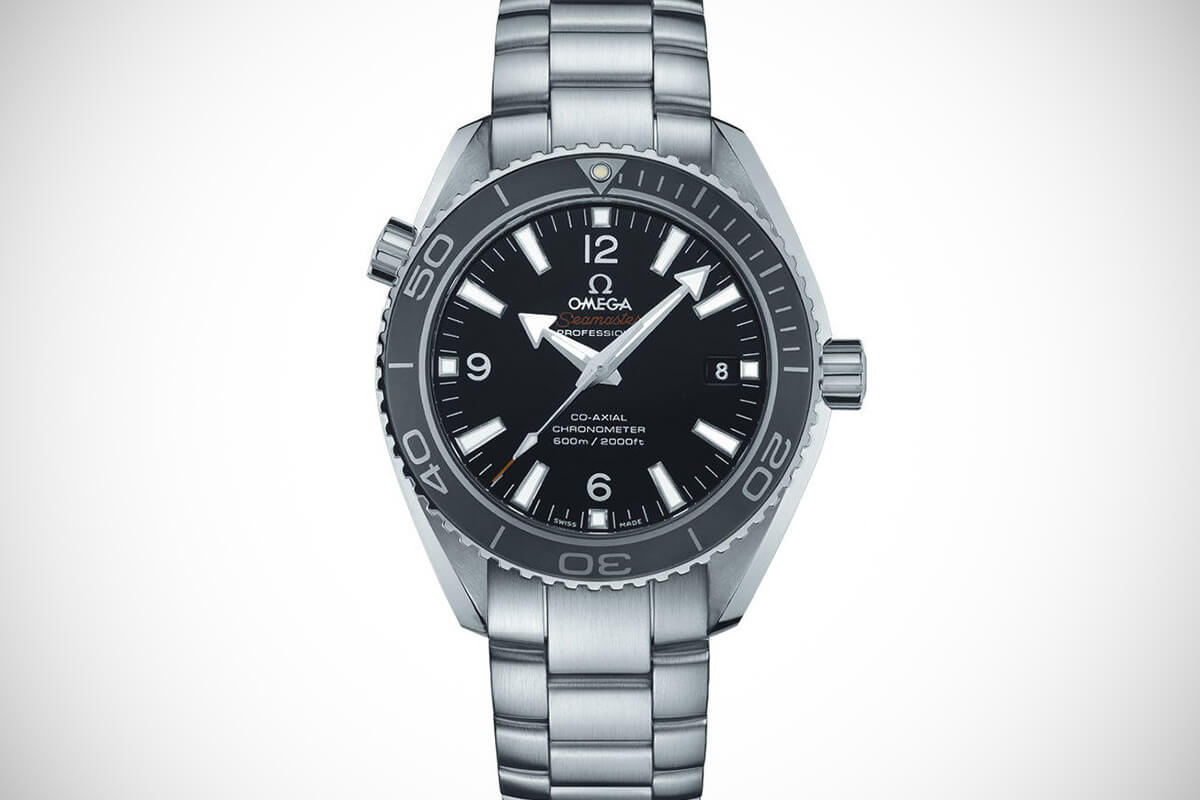 In 2005, Omega expanded its maritime legacy with the launch of the Planet Ocean line. The stylish Seamaster Planet Ocean 600 M pays homage to Omega’s dive watch heritage. This model features a black ceramic unidirectional rotating dive bezel mounted on a 42-mm stainless steel case that is water-resistant to 600 meters or 2,000 feet. The helium-escape valve is the mark of a true professional dive instrument.

Inside the case, yet visible through the sapphire caseback, beats the self-winding Omega Co-Axial caliber 8500 COSC-certified chronometer movement (not the fully anti-magnetic one yet). The free-sprung balance and twin mainspring barrels contribute to the chronometric precision and distinguish this caliber from those found in many other dive watches.

Even hardened adventurers must occasionally don a dress watch, and here again, Omega offers a time-honored selection. The De Ville Prestige collection is characterized by pure, classic styling and a luxurious appearance that is never out of fashion. The model shown below features a 39.5-mm stainless steel case with a striking two-zone, sun-brushed blue dial protected by a scratch-resistant sapphire crystal. The case offers 30-meter water resistance. 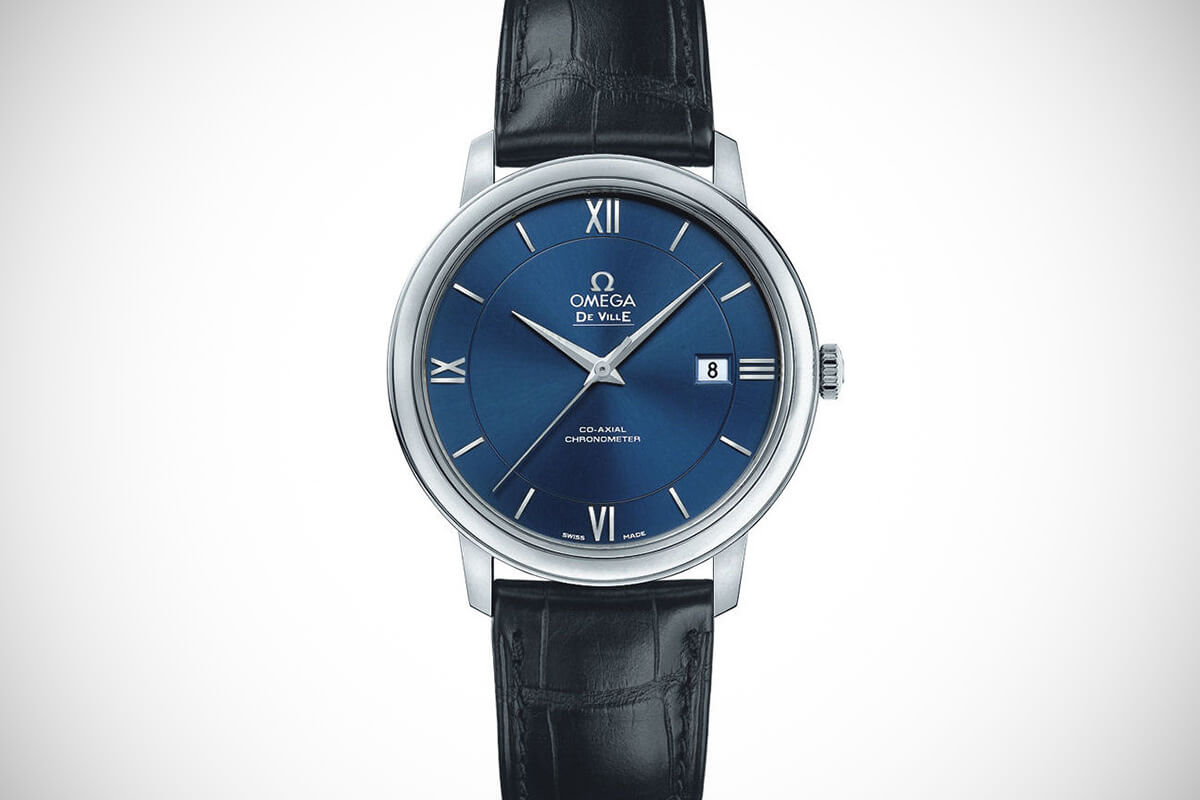 At the heart of this timepiece is the automatic-winding Co-Axial caliber 2500. This is the movement in which the Co-Axial escapement debuted on the world stage in 1999, conferring upon the caliber enduring historical significance.

This Omega De Ville Prestige in stainless steel is priced at 2.800 Euros.

This story was first published on WatchTime here, updated and republished on Monochrome with authorization.