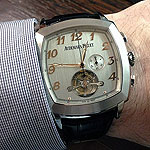 It’s Fratello Friday! Since 2014 started a good week ago, and this year’s new watches start rolling out at the SIHH watch fair just over a week from now, I thought it was time to list my Top 5 favorite watches introduced in 2013.

Last year, I attended both the SIHH in Geneva and the Baselworld fair in Basel, where most brands present their new watches for the first time. Immediately after these shows, I admit, I wasn’t really convinced that I’d seen a lot of innovative or mind-blowing watches. However, after a bit of reflection, I think that I may have just been overwhelmed at the time by the number of new watches. So, without further ado, here are My Top 5, which consists of a mix between watches from big brands as well as watches from relatively unknown brands or so-called independent watchmakers.

1. Omega Speedmaster Dark Side of the Moon

Omega has finally heeded the calls of the many Omega Speedmaster fans for a black Speedmaster. Instead of taking the easy path of using DLC techniques on an existing model, like the classic hand-wound Speedmaster Professional or relatively new Speedmaster Co-Axial caliber 9300 model, Omega decided to create a watch case out of a solid block of black ceramic. Even the dial is made out from ceramic. Inside, Omega decided to use its in-house-developed co-cxial column-wheel chronograph movement, Caliber 9300. Even though some people still find it hard to accept the higher pricing on modern Omega watches, I firmly believe this one offers something completely different and more high-value than, say, a model from 15 years ago. In the meantime, the watch is already creating waiting lists at many Omega boutiques. More about the Omega Speedmaster Dark Side of the Moon can be found here. Have I mentioned how much I love watches with a moon-phases indication? The revived Arnold & Son brand introduced a number of interesting timepieces this year. Rather than its much-discussed Ultra Thin Tourbillon Escapement timepiece, I actually prefer the HM Perpetual Moon timepiece with an extra-large moon-phases disk on the dial. The hand-engraved moon-phase disk is beautiful on this elegantly executed timepiece. It is quite difficult to find a nice, classically designed watch that doesn’t look old-fashioned (“Your grandfather’s watch”).  Inside, Arnold & Son uses the mechanical hand-wound A&S1512 movement, which should display the correct moon phase for the next 122 years. The back of the watch has a very precise indicator of the moon phases, which can be used to set the moon on the dial with the utmost precision. I wrote an in-depth review on the HM Perpetual Moon here.