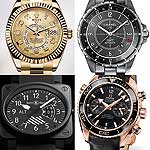 Watch brands spent almost half a billion dollars on advertising in the U.S in 2013. The total was $492.68 million: a record high, and up 23.3 percent from the 2012 total. That figure comes from Kantar Media, which each year compiles estimates of ad spending for a range of different products. The figures for 2013 signal that the U.S. watch market is still growing, especially as Swiss luxury brands turn their sights back from China to this country.
Last year was the fourth year in a row of growth in U.S. watch advertising. Sixty-nine brands spent more than $1 million on ads, a new record. To reach last year’s top 25, a watch company had to spend $4.66 million. That’s 28 percent more than it took to make the list in 2012.

Stronger than ever in the number-two spot was Breitling, which spent $43.85 million. Although Breitling has been in second place for seven years, its 2013 total was a huge jump: 48.7 percent. It hadn’t broken $30 million before this. (No one but Rolex ever had.) The brand spent more than $33 million on magazine advertising. That was almost as much as Rolex, which spent $36 million.