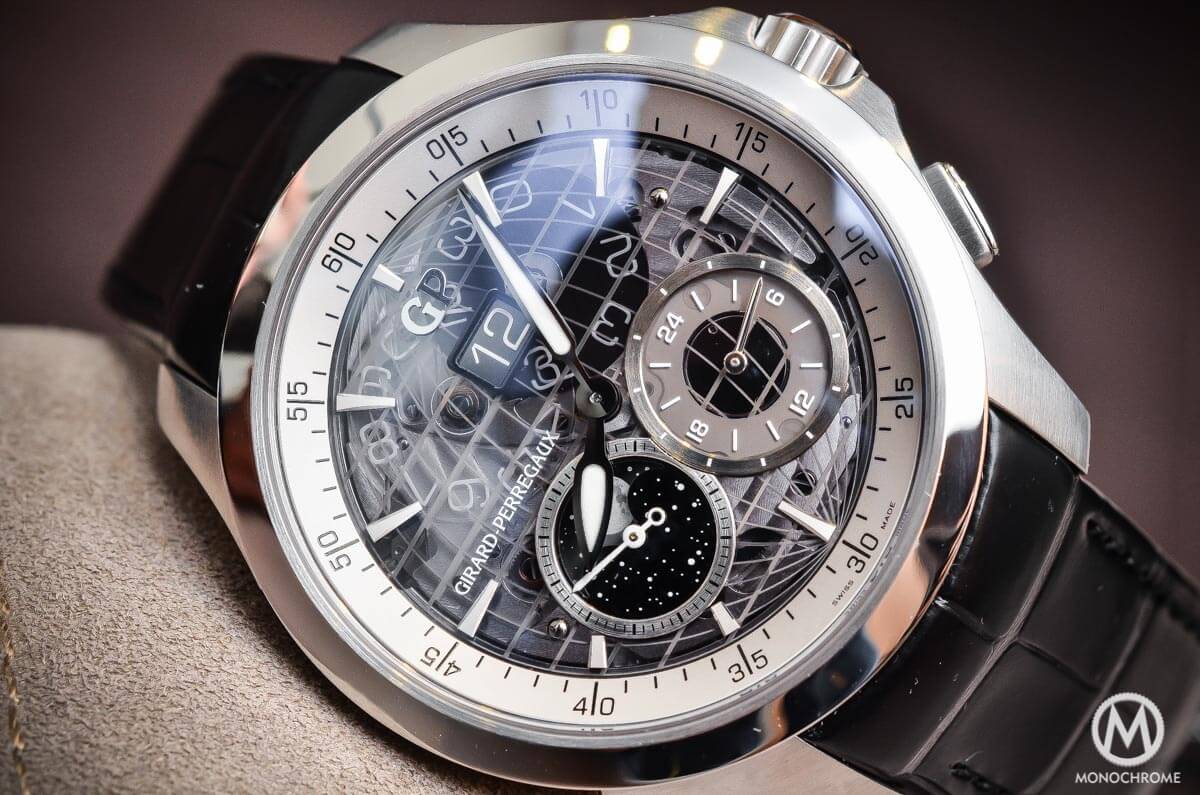 Showing the movement became the rule in watchmaking. Whether it’s a superbly finished haute horology one or a simple entry-level engine, brands are now manufacturing the majority of their watches with a sapphire caseback – meaning having a view on the back of the movement. However, if a 3-hand watch has almost nothing to show on the dial-side of its movement, some more complicated timepieces can be proudly exposed from every angle. That’s what GP wants to demonstrate with its new watch, the Girard-Perregaux Traveller Large Date, Moonphase & GMT that features now a sapphire dial that reveals some usually hidden technical parts.

Technically speaking, this new edition with sapphire dial of the Girard-Perregaux Traveller Large Date, Moonphase & GMT is fully identical to the classical edition we’ve seen last year. The evolution is purely visual, with the introduction of this see-through dial and some new decorations. As said, if a 3-hand watch usually has nothing to show on the dial side of its movement – meaning only a plate that is, on upper-market watches, finished with circular graining – this new Girard-Perregaux Traveller Large Date, Moonphase & GMT has a lot more hidden behind its dial than a couple of axis or wheels. In fact, the main interest is to see the work of the specific GP large date. 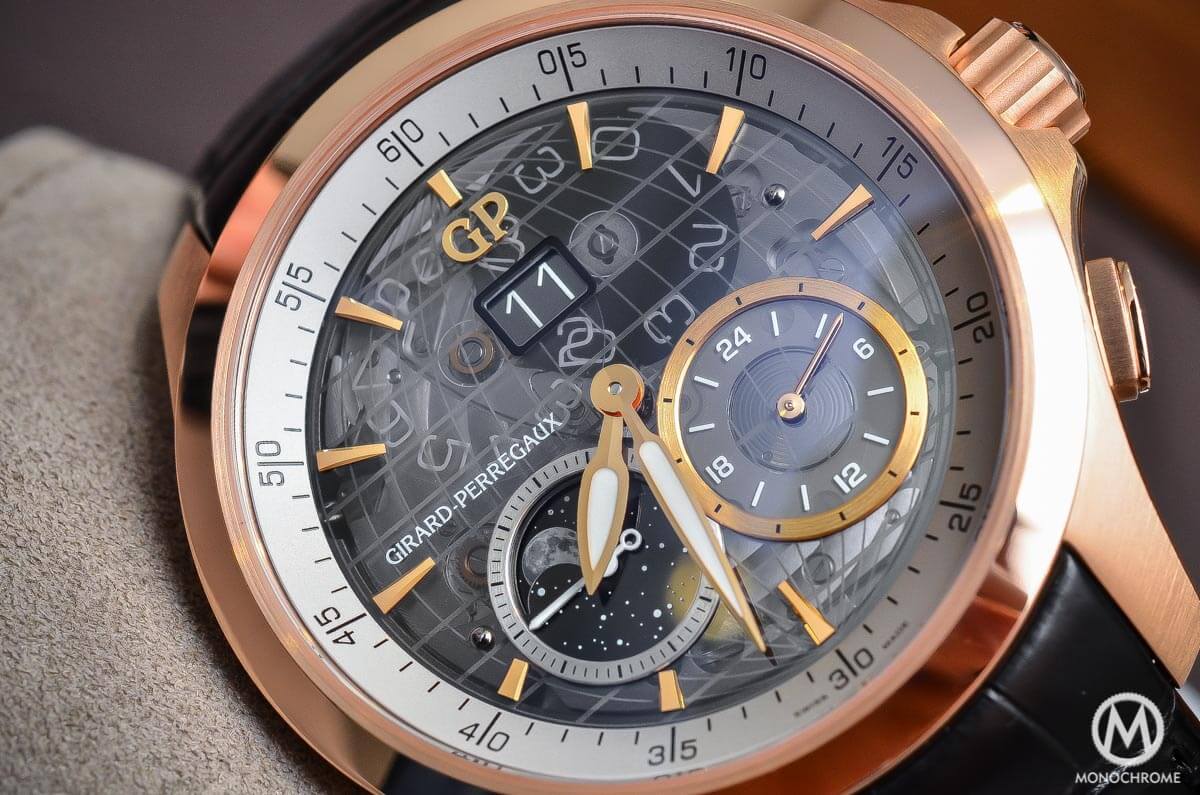 Girard-Perregaux has its own way to display the quantième. Its large date (the two digits are displayed on two distinct discs) here uses a clever visual effect that makes you believe there’s only one disc. Usually, a large date shows a gap between two discs juxtaposed on the same level (like Glashutte Original does) or two discs on two different levels, one overlapping the other (a visual default that is usually corrected by creating two separated windows, one for each digit, like Lange & Sohne on the Lange 1). If GP’s device can’t be seen on the classical edition of the Traveller Large Date, Moonphase & GMT, here the sapphire dial gives you a clear view on the way it works. It is composed of two discs, the right one painted in black that displays the left digit with white numerals – located on the lower level – and a second one on the left that measures 0.10mm height and that is made of transparent folanorm with white numerals printed. This transparent discs is overlapping the other one, creating the effect of a single disc. Simple and clever! 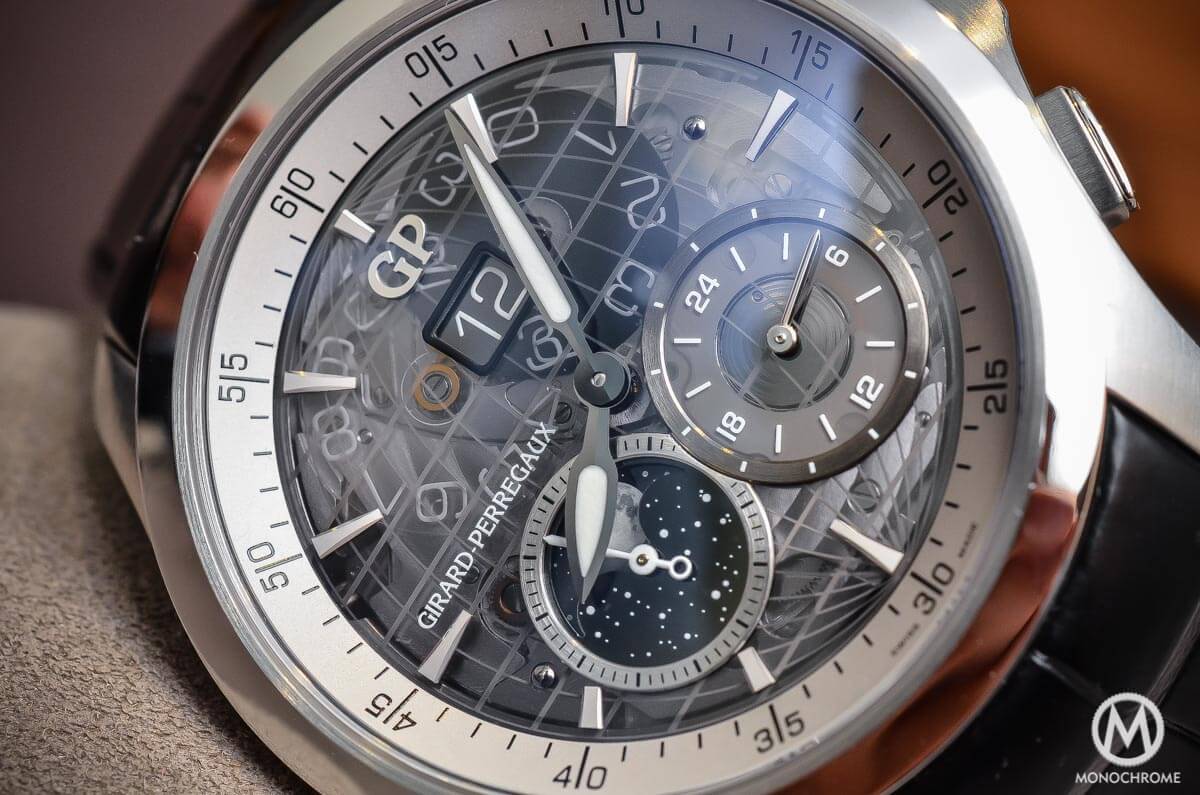 The sapphire dial also allows to have a view on the nicely finished main plate, with several gears and wheel visible, and circular Geneva Stripes. The rest of the indications are similar to the the classical edition of the Traveller Large Date, Moonphase & GMT, meaning a moon phase indication at 7:30 with a photo-realistic metallic treatment that is surrounded by a small-second and a 24-hour second time-zone indicator at 4:30 that can be corrected by one-hour increments with the pusher on the flank. 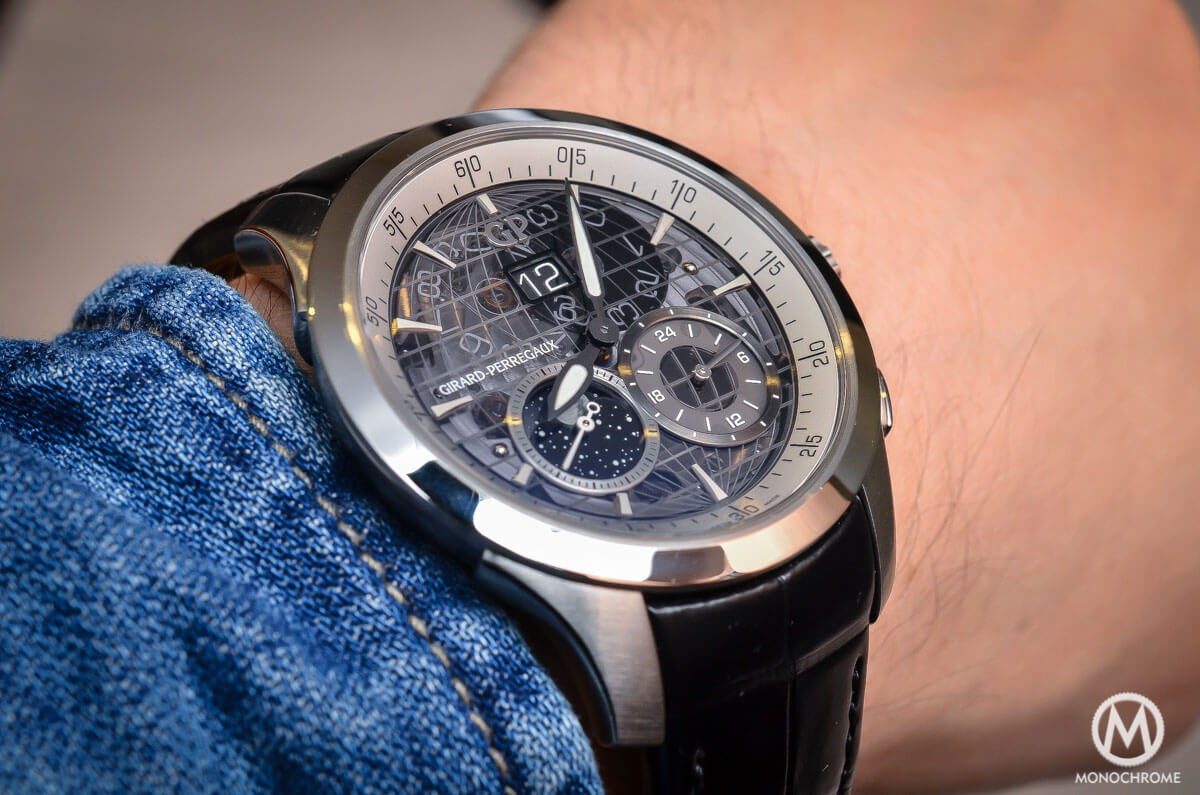