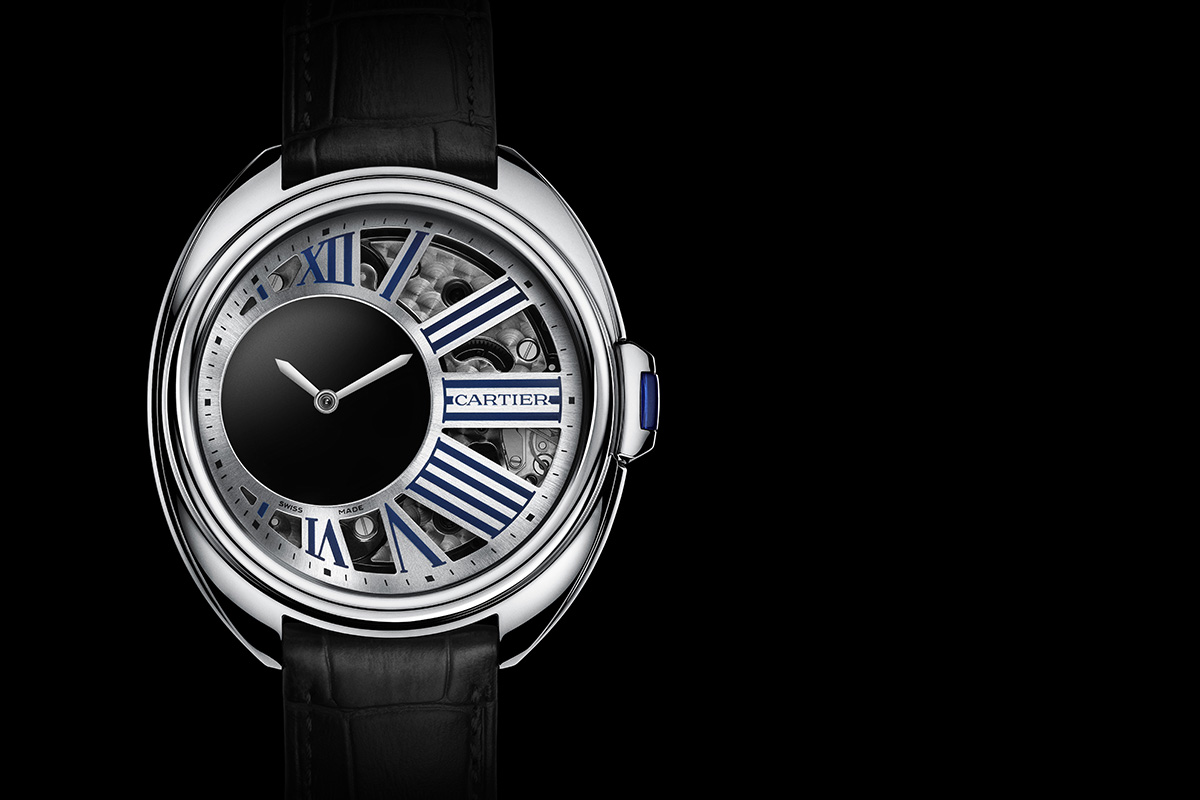 When revealed at the 2015 edition of the Salon International de la Haute Horlogerie (the SIHH), the Clé de Cartier had been warmly welcomed by both the horological press and collectors, mainly because of its pure, rakish and clean design, purely in the vein of the Cartier tradition. The curved profile, the clever integration of the crown and the modern interpretation are key elements of its success. This watch, which was still only available with a simple (in-house) movement, comes now with an interesting mysterious movement complication. Here is the Clé de Cartier Mysterious Hour.

Using the same oval and curved case (with a proper great comfort on the wrist) and the same key-style crown (Clé in French), Cartier adds to its latest addition a more complicated, yet quite intriguing movement and dial, where the hands seem to float over the dial – with no mechanical link with the rest of the movement – something we already showed you here, with the Rotonde de Cartier Mysterious Hour (and some other watches with this same kind of complication). In the flesh, this display is quite magical and once on the wrist, it’s actually really intriguing to see the hands rotating without any (visible) gears or pinions. However, no magic or witchcraft here but pure mechanical inventiveness.

Turning back the Clé de Cartier Mysterious Hour and you’ll discover that achieving such a display requires several mechanical tricks, including a specific layout for the movement where all is miniaturized and placed on one side, from the barrel, the gear train, the escapement and the regulating organ. The Calibre 9981 MC that powers the Clé de Cartier Mysterious Hour (and it’s Rotonde sibling) is not small at 31.9mm, but do consider that almost half of it is dedicated to the transparent dial. And it’s not thick either, at 4.61mm… Now you could expect the power reserve to be extremely short, due to a small barrel. Not even, as you’ll get 48 hours of energy (quite in the average for a rather slim watch). Furthermore, the movement isn’t slow (something that could explain the longer power reserve…), as it ticks at 28.800 bph. Based on specs, it’s quite an impressive movement, considering the very tiny space allowed for the mechanical parts.

Back on the display itself. So what’s the trick? In fact, to create this visual effect where time seems to be displayed with the help of divine forces, the hands are placed on transparent geared discs of sapphire and are driven in the margins of the case. Instead of moving the central pinion that is linked to the hands, the gear-train drives directly the periphery of these two sapphire discs on which the hands are placed. Not that complicated but clever!

The rest of the watch is faithful to the normal Clé de Cartier and to the rest of the Cartier collection. The case grows a bit at 41mm (instead of 40mm) to “absorb” the new movement but keeps the exact same design. The dial is a partially skeletonized and brushed plate, with the typically Cartier blue Roman numerals and holes that gives a partial view on the main plate of the movement. Of course, the key-style crown, emblematic of the collection, and its cabochon sapphire, are present. The Clé de Cartier Mysterious Hour is available in 18k rose gold (priced at 62,000 Euros) or in solid palladium (priced at 66,500 Euros). Cartier.com.