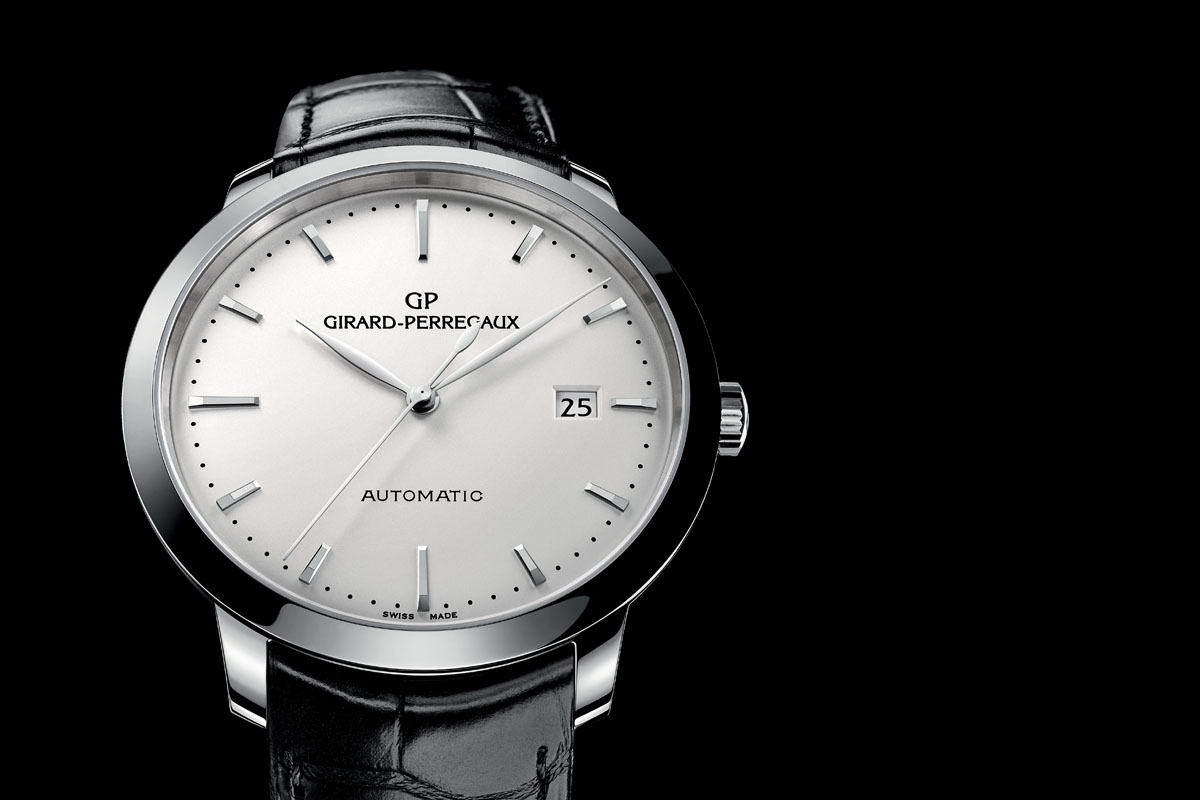 The Girard-Perregaux 1966… A watch that we love, for all its beauty and for its little faults. The 1966 is Girard-Perregaux‘ iconic watch, the timepiece that best defines the DNA of the brand (alongside the tourbillons under 3 gold bridges, but that’s another story… and another price range). We extensively reviewed it, but at this time, this (almost) perfect dress watch was only available in gold or platinum. For those seeking for something a bit sportier or for clients with a lower budget, the icon is now changing its habits, as the Girard-Perregaux 1966 is now offered in Stainless Steel.

What is the Girard-Perregaux 1966 about? To understand a bit more, let’s have a look at the edition we reviewed, the 38mm in pink gold with blue dial and strap. This is, assuredly, a nice watch, with a slim and elegant case, a nice dial with beautiful (and again elegant) indexes and hands and an interesting movement. When we explained you about this watch, we even stated that it could be a very appropriate definition of a dress watch. Well, the composition isn’t perfect either – but that’s us, we’re perfectionists. Now we have a steel edition of the 1966 – and it’s a bit more subtle than just changing the material of the case.

Design-wise, the Girard-Perregaux 1966 Steel remains a 1966. The case keeps its actual shape, with a central part round and curved to the caseback – creating a slim and elegant profile – a beveled bezel, short and curved lugs – that allow for a great comfort on the wrist and a virtually smaller diameter on the wrist – and the same signed and notched crown. However, the diameter is slightly different from any other Girard-Perregaux 1966. Previously, you could choose between the 38mm case or the 41mm case – and it’s not just about a change of diameter but it also implies a different movement, larger on the 41mm. The Girard-Perregaux 1966 Steel measures an intermediate size, at 40mm, which we consider as a reasonable and modern choice.

Continuing in the details, let’s have a look at the dial. Again, the overall design remains familiar, with the same leaf hands (that are now made in steel too, to match the case). The silvery color of the dial is also very (too?) classical. It’s elegant, discreet and will be easy to match with any kind of attire. What changes however are the indexes and the minute track. Previously, the 1966 featured long and thin indexes (4 applied ones for the quarters and the rest painted directly on the dial, every 5 minutes) but no minute track. This sleek design of the dial was clearly participating to the elegance and discretion of the 1966. Turning into a more versatile and sporty material, the Girard-Perregaux 1966 Steel also updates its indexes for something a bit more casual: facetted and straight applied indexes every 5 minutes and tiny black dots to create a minute track. Same overall design, different taste.

Under the hood ticks the same in-house movement than the rest of the 3-hands 1966, the GP03300-0030. One main difference compared to the gold editions: the rotor is not in gold anymore but rhodium plated. Thus, we found back the same positive points: a nicely finished movement (Geneva stripes, chamfered bridges, perlages), an efficient automatic winding, a flat design (3.2mm in height). However, this also means the same issue as the other 1966 watches: a too small diameter for the case. This movement boast 46 hours of power reserve and displays the hours, minutes and seconds on the central axis, as well as a date in a window at 3 (that is, considering the size of the movement, placed far away form the periphery of the dial).

The Girard-Perregaux 1966 Steel is, like the rest of the collection, an attractive watch and the new material doesn’t change the qualities of the movement and of the overall design, that feels however a bit more casual here. The price though changes quite a lot, as a gold edition comes for approximately $16,000, while this steel edition will be priced at $7,500 on alligator strap (ref. 49555-11-131-BB60) and $8,200 on steel bracelet (ref. 49555-11-131-11A). Girard-Perregaux.com or the dedicated website.

Could this be the thinnest mechanical watch in the world? Jaeger-LeCoultre Master Ultra-Thin Squelette (specs price)