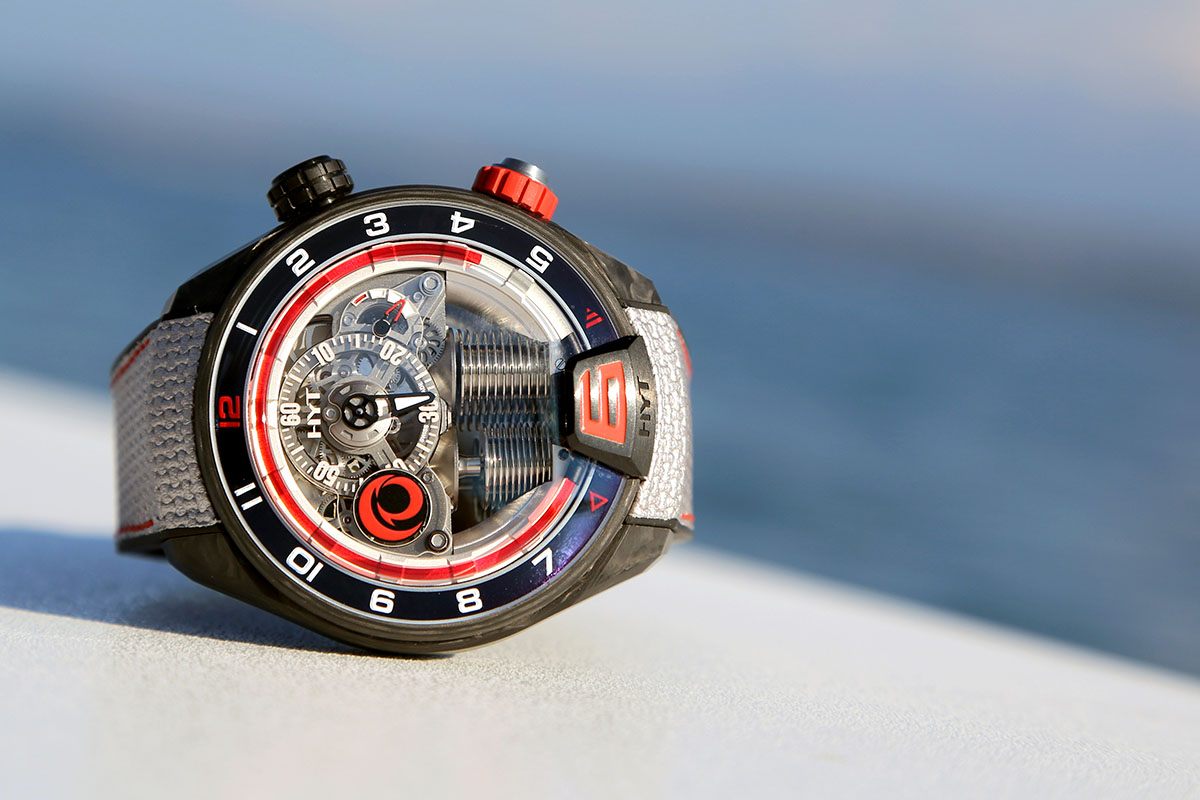 You thought everything has been done in watchmaking. Well, 3 years ago, HYT showed us that no and that watchmaking can still evolve and bring some proper innovative mechanisms and complications, as they introduced something that we imagined totally incompatible with a movement: liquid. It was the H1 and it was a great piece. A few developments later, we’re at the H4, that we extensively reviewed here. Evolution doesn’t stop however, as a new version of this timepiece is about to be launched, the HYT H4 Alinghi – and it hides something quite special…

Basically, the HYT H4 is the evolution of the H1 (the H2 and the H3 are much, much more complicated timepieces). It is based on the same movement architecture as the H1 (thus the 2-part movement, with mechanical module made by Chronode and the in-house fluidic module), which has been skeletonised. There’s no real dial anymore but instead, the movement is covered by a sapphire crystal on which the indications are printed – and thus allowing for a view into the innards of the movement. The fluidic mechanism remains however the same that on the H1 – and there’s no evolution on this limited edition of the HYT H4 Alinghi. We found back the two bellows that push two liquids in a capillary to indicate the hours and an off-centred regulator-style minute dial at 12. For more details about how an HYT work, please look at our review of the HYT H1, our review of the HYT H2 and at the video of the HYT H4 (to see the fluid in action).

Just like the normal HYT H4 Gotham, the HYT H4 Alinghi features a 51mm case made of Carbon. The central part and the lugs are machined from a single block of super-rigid 3DTPTM carbon. It comprises carbon threads which are woven to a maximum diameter of 7 microns and with a thickness layer of 0.15 mm. Depending on the angles, it shows straight patterns (on the sides) or randomly aligned fibres (on the lugs or the bezel). The evolution comes from the colours used on the dial (inscriptions are now white on the minute dial and the 12 numeral is red) and the dome at 6 has now its numeral lacquered in red too. The strap is also new – a black rubber base with integrated silver sail canvas and red stitching. On top of the small second indicator we can find the Alinghi logo (the sails team that HYT sponsors).

So where’s the real novelty? In fact, it can’t be seen during the day. The HYT H4 Alinghi is equipped with a light source. Under the rider at 6 o’clock, HYT has concealed two LEDs. Once activated, they flood the dial with white light. At night, the red fluid is energized by this light source, becoming perfectly visible. So now you might think that there’s a battery in this watch?… Thankfully, no. It’s a mechanical device, which works like a dynamo (converting mechanical power into light energy). In fact, rotating the push-piece at 4:30 will wind the generator. A pressure on this same push-piece then activates the two LEDs which enlighten the dial of the HYT H4 Alinghi. This illumination is possible for a maximum of five seconds, after which the mechanism must be reinitialized.

This mechanism (with a quite incredible miniaturization) is added to the existing movement but invisible from the dial side, as located between 4 and 5. It can be slightly guessed from the back side, but no worries, there’s no electric parts visible. The HYT H4 Alinghi is and will always be a purely mechanical watch.

The HYT H4 Alinghi will be a limited edition of 25 pieces and will be priced at $99,000. More on www.hytwatches.com.