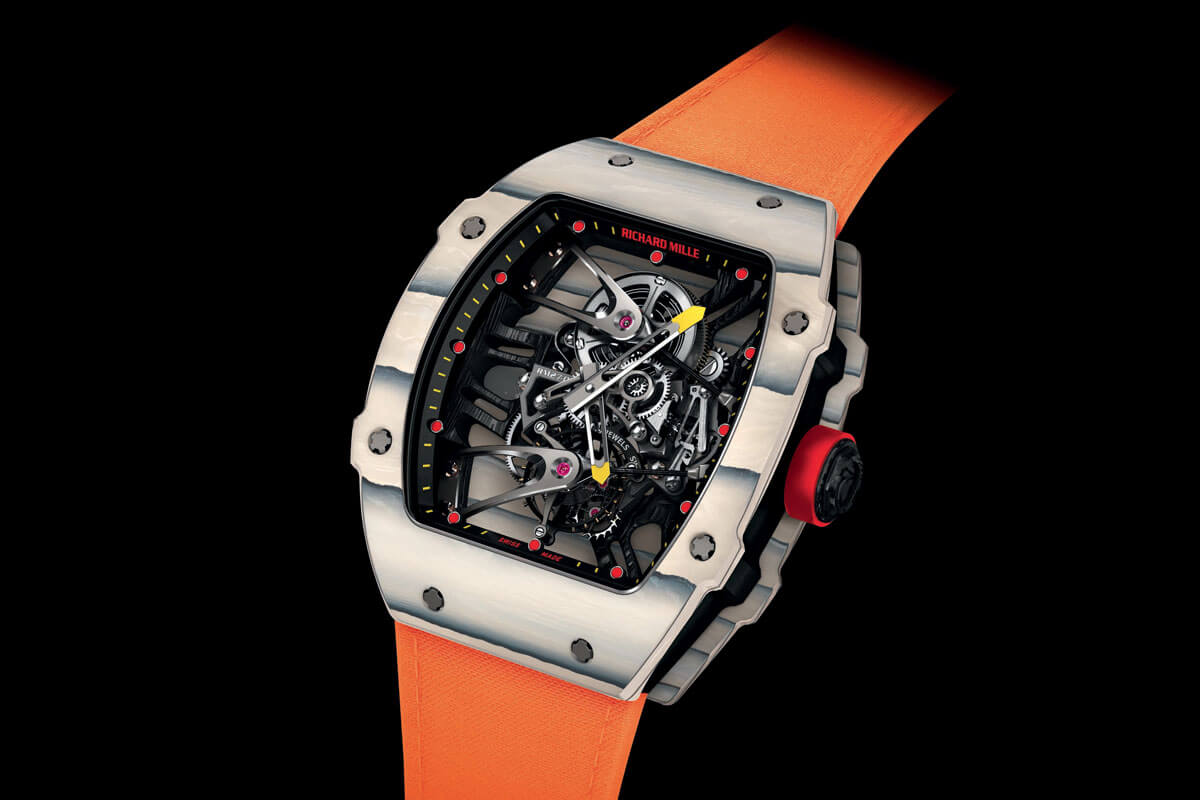 There are sports watches and watches made for sport, meaning watches that are designed to be worn when practicing extreme sports. Whether they are strapped on the wrist of a F1 driver, on the wrist of a golf player or on the wrist of a super-fast sprinter (and here too), watches created by Richard Mille can resist to all kind of difficult situations. These prestigious ambassadors are RM’s hallmark and the most famous one certainly is Rafael Nadal. As the French Open (Roland Garros 2015) just started, it’s now time to introduce the latest result of this partnership, the Richard Mille RM 27-02 Tourbillon Rafael Nadal.

A common and impressive feature shared by all the sport-oriented watches created by Richard Mille is the ability to be used in the field. We’re not talking about bringing some sportive visual clues to an existing watch here but instead to properly design watches that can be used while practicing sports to an extreme level, watches that can resist to the worst situations and that are conceived not for but with athletes. For instance, the RM 36-01 designed with Rally driver Sebastien Loeb is able to measure G-forces, the RM 055 conceived with golf champion Bubba Watson can resist to the vibrations of a drive and the RM 59-01 Tourbillon created for sprinter Yohan Blake has an ultra-lightweight case with an aerodynamic shape. Richard Mille is using these ambassadors not only for marketing reasons but also as R&D partners, in order to develop new watches with special technologies. 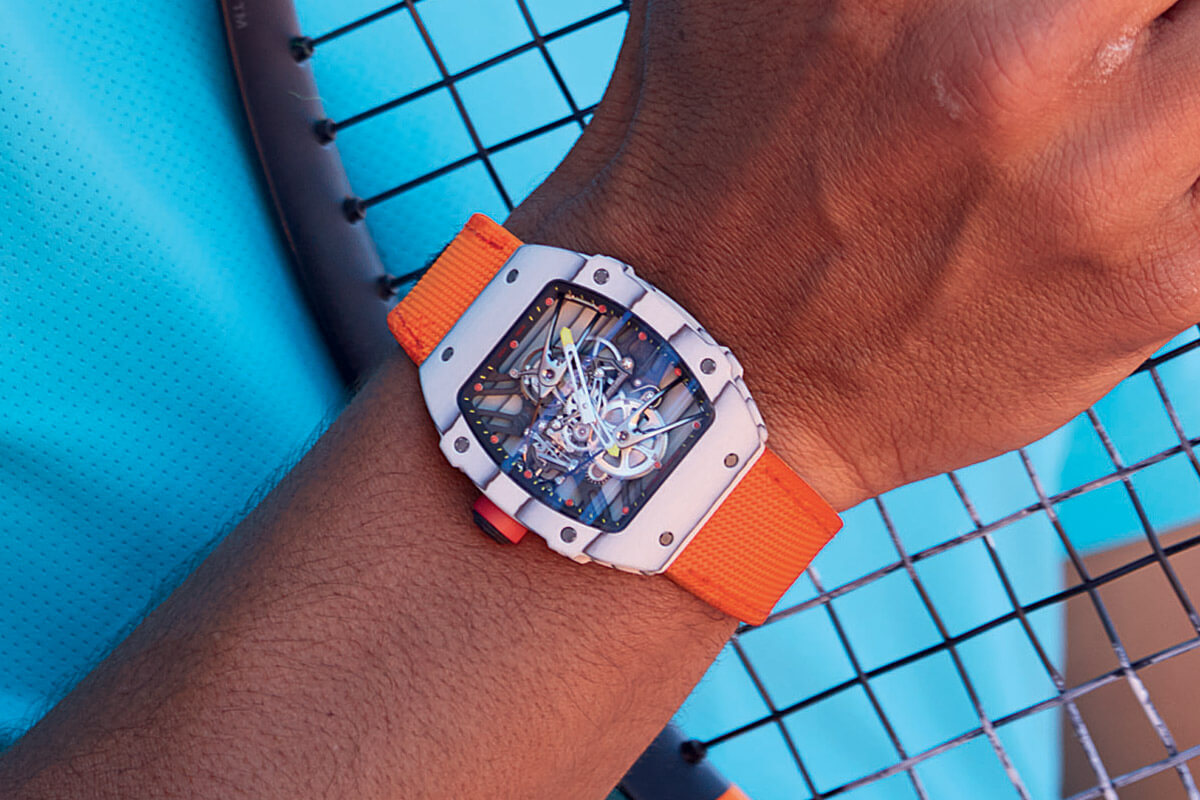 RM’s latest creation is the result of the partnership with one of the greatest tennis players of our times: the Richard Mille RM 27-02 Tourbillon Rafael Nadal. What we have here is again a super-light watch, with a complicated movement, an impressive construction of the case, innovative and stunning materials and a very high resistance to shocks. The first thing that comes directly to your eyes is this special case with a quite odd colour… Admit it, whether you like it or not, the bezel and caseback of the Richard Mille RM 27-02 Tourbillon Rafael Nadal are special. It is made of TPT Quartz – again a first in horology. This unique black and white appearance comes from a layer construction (over 600 layers in total), alternating quartz and carbon fibers. Richard Mille’s engineers have developed a highly original material known as TPT quartz, composed of hundreds of layers of quartz filaments piled on top of each other. Silica layers are inserted between layers of NTPT carbon (you can read more about this material here) with a positioning system that changes the orientation of the fibers between each layer by 45 degrees. Machining will then reveal the randomly placed layers, creating a unique look for every watch. 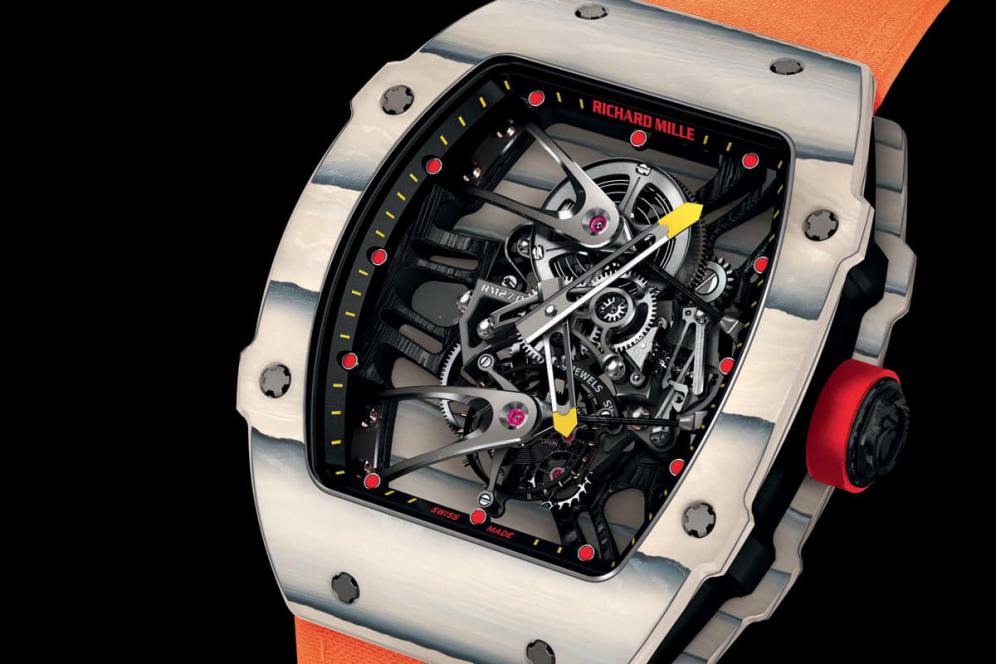 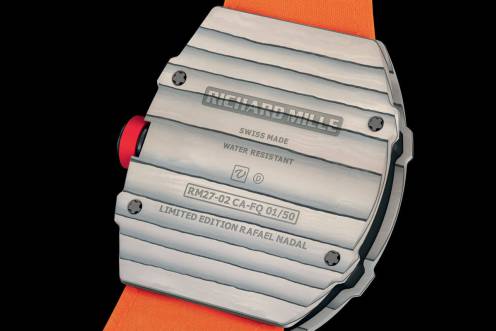 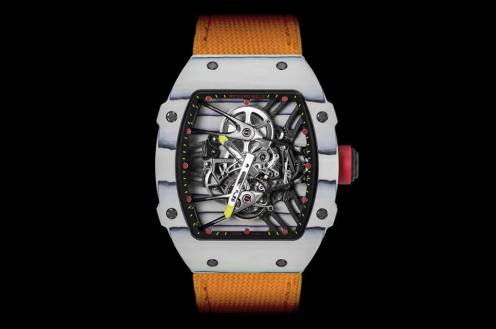 The second innovation comes from the construction of the watch. Usually, the case and the movement are two totally separated parts reunited in the end of the assembly process and linked by screws. Here, Richard Mille took inspiration from the chassis of racing cars by creating a ‘unibody’ baseplate. In fact, the black band that circled the Richard Mille RM 27-02 (on which the bezel and caseback are attached) and the skeletonized bridges that hold parts of the movement are a single piece of NTPT Carbon. just like in a racing car, the engine is directly integrated in the chassis. It creates a watch that is first very light on the wrist but mainly that is extremely resistant to shocks (up to 5000g) – something useful when this watch is strapped on the wrist of Rafael Nadal that can strike a ball at 215km/h (130mph). 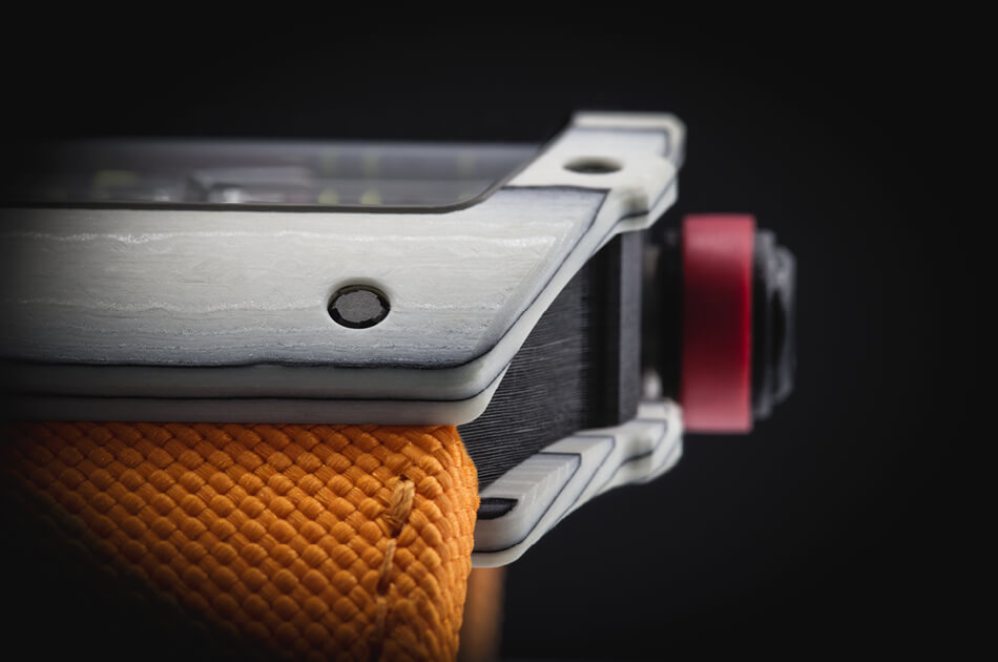 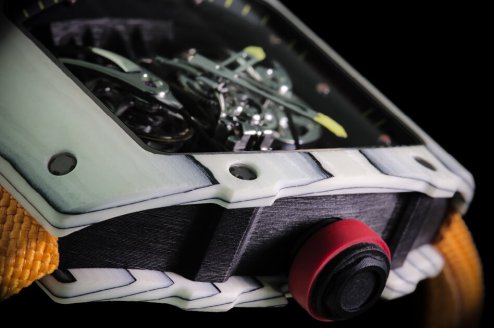 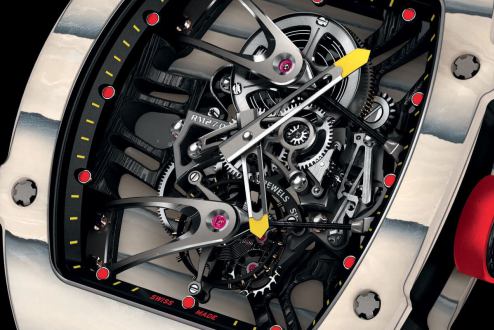 The movement is not to be forgotten here. What we have is a fully skeletonized and highly finished tourbillon calibre. It shows two massive grade 5 titanium bridges to hold both the tourbillon at 6 and the fast rotating barrel at 12 (that rotates in 6 hours instead of 7.5 hours for a better torque and regularity of the power). The one-minute tourbillon uses a free sprung balance with variable inertia for better chronometric results. All together, this movement that can resist to extreme shocks is able to deliver 70 hours of power reserve and to feature something as delicate as a tourbillon in only 3.35 grams. This doesn’t prevent the Richard Mille RM 27-02 Tourbillon Rafael Nadal to be superbly finished, as the all the parts are beveled, shot-blasted or satin-brushed by hand. 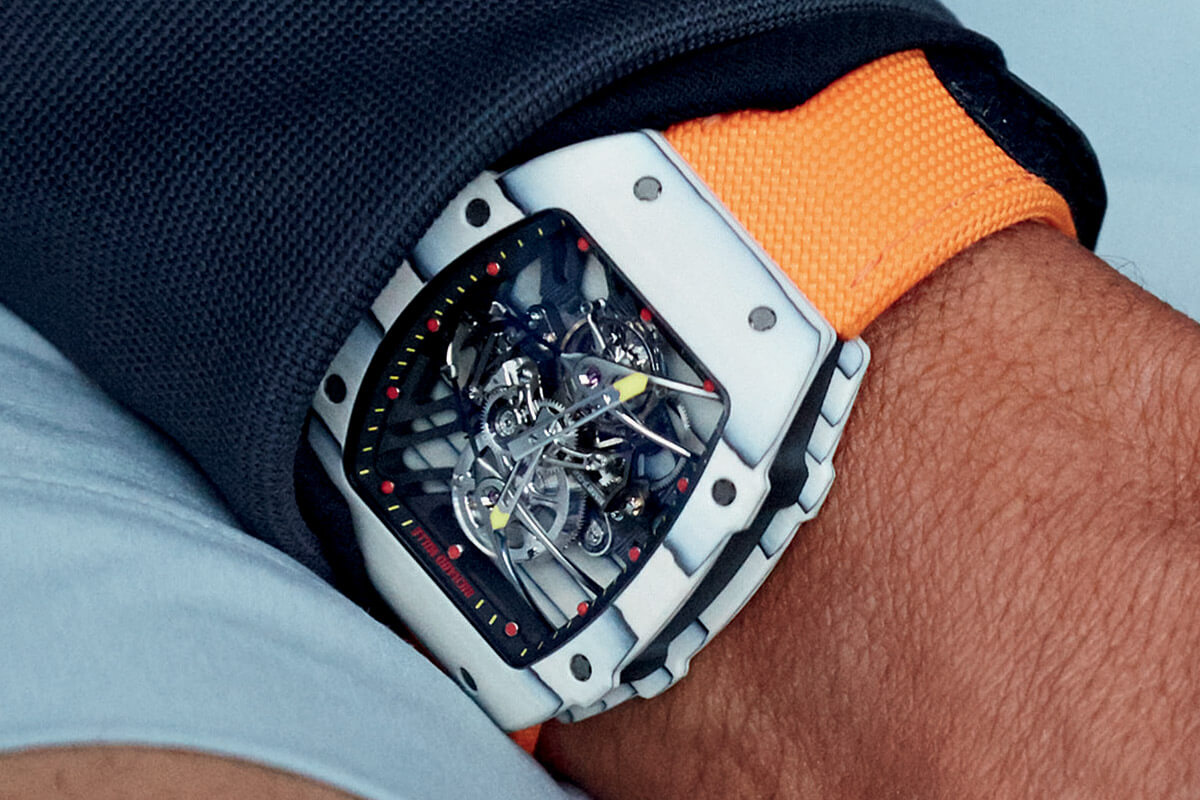 This Richard Mille RM 27-02 Tourbillon Rafael Nadal is again a demonstration of what modern and high-end horology can do. Forget about the look or the strange colour of the case. The point of such a watch is not here. Forget also about the price – certainly close to half a million. Just keep in mind the stunning innovations and the technology used. This new edition will be made in a production run of just 50 models.

More details on the dedicated page on Richard Mille official.