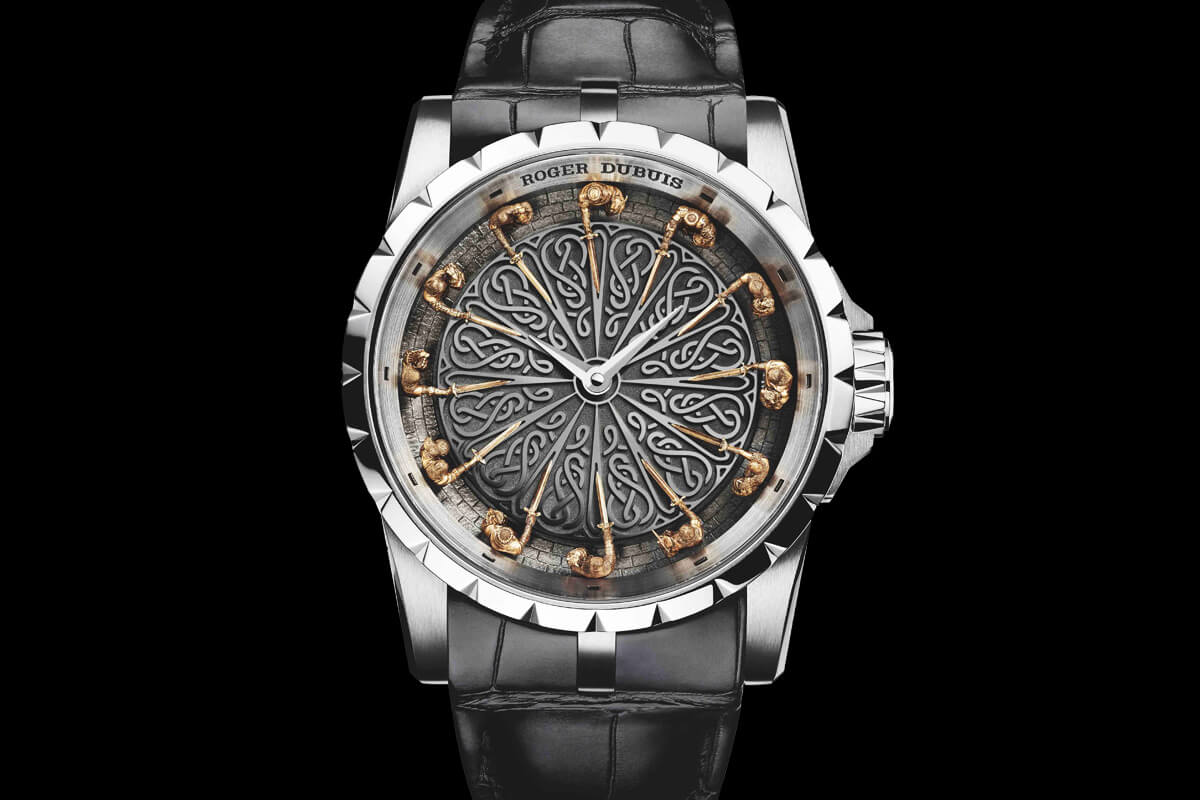 The manufacture Roger Dubuis is known to be anti-conformist – a surprising fact from a brand owned by the large and usually classical Richemont Group. The watches made by Dubuis are usually bold, complicated and unique. In 2013, they came with a superb example of their independent spirit, the Roger Dubuis Excalibur Automatic Limited Edition – Knights of the Round Table. This year there is new edition reminiscent of the same spirit, and guess what, it’s called the Roger Dubuis Excalibur Knights of the Round Table II.

As we told you with the very first edition of the Excalibur Knights of the Round Table, grabbing back on the past is what Roger Dubuis also did (like many other brands are looking in their own heritage), however they grabbed back quite a bit further then any other brand ever did! For 2015, a new 28-piece edition will be available exclusively from Roger Dubuis boutiques and it features the 12 engraved and sculpted bronze knights positioned around a precious black jade dial.

The Roger Dubuis Excalibur Knights of the Round Table II uses historical clues as an inspiration. But don’t expect to see a vintage reissue here as the spirit utilized to create the design is far, far older than a 1960s watch. Roger Dubuis named their main collection the Excalibur, a reference to the legendary blade that was supposedly embedded into a rock by Uther Pendragon only to be withdrawn by the true king – in fact, a reference to King Arthur. Around the legend of King Arthur sits another legend: ‘12 Knights took the oath of allegiance to King Arthur, swearing to spare no effort, overcome any obstacle and return triumphant’. It’s these 12 Knights of the Round Table that are again depicted in the second Opus of the Roger Dubuis Excalibur.

The 12 figures representing the legendary Knights of the Round Table with their swords form a circle replacing traditional hour-markers. Each knight is only 6.5 mm tall and unique in its own right, as each consists of a three-dimensional casting in bronze with finely sculpted, hand-finished details, including three-dimensional micro-engraving. Previously, Roger Dubuis used gold to cast and engraved these micro-sulptures (in the context of the Excalibur Automatic Limited Edition – Knights of the Round Table First edition). The use of bronze makes it first harder to engrave but also add a unique patina to the details of engraving.

The dial is made of a central part (the round table) in engraved black jade surrounded by a satin white gold circular flange also engraved and patinated. The skills used to create those dials are impressive and it takes one month to make just two dials. The rest of the watch is typically Roger Dubuis. The Roger Dubuis Excalibur Knights of the Round Table II comes with a 45mm case made of 18k white gold, featuring the typically RD notched bezel and triple lugs (with an intermediate part in the center of the strap).

The movement is not visible as hidden behind an engraved caseback. Visible or not is no question for Roger Dubuis as we found here the self-winding RD821 movement, finished by hand and stamped with the Hallmark of Geneva (like all the watches manufactured by Roger Dubuis).

The Roger Dubuis Excalibur Knights of the Round Table II is a limited edition of 28 pieces only available in official boutiques of the brand. Price: 268.000 USD – the price of exclusivity and of precision hand-work.