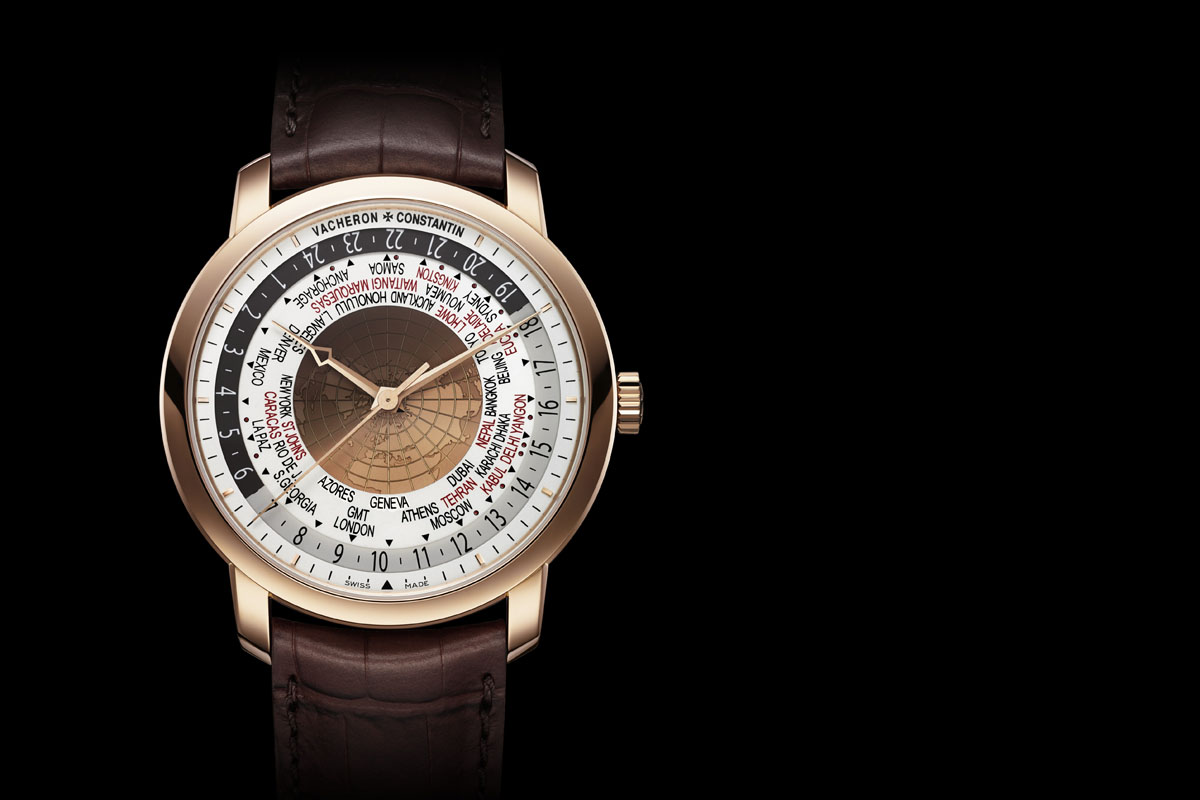 Alongside being a very elegant watch, the Vacheron Constantin Traditionnelle World Time has something special, something more and in fact, something that all world-time watches should have. Usually, this kind of watches comes with a display capable of displaying 24 different time-zones. Convenient right? Yes and no, as the world doesn’t have 24 but 37 time-zones. Only a few watches can show all of the 37 time-zones and this is the case with this Vacheron Constantin Traditionnelle World Time, that comes with a new face for 2015, including a new engraved gold dial.

A world-timer is a watch that makes sense in our modern era, with more and more people working in international environment and traveling more often than ever before. The world became a global village where theoretically everyone will meet once. However, we do have to consider that we’re not all living on the same time-zone and a world-time watch can be an extremely useful ally. A world-timer usually features a dial with a classical central part showing the local time (with classical hour and minute hands), a city ring, onto which several cities around the world are printed and finally a rotating discs that displays 24 time-zones. Combining this disc with the city ring allows you to know what time it is all around the world in a glance. Practical for sure.

However, now comes the issue, as most of the world-timers feature 24 time-zones, like this Montblanc Heritage Spirit Orbis Terrarum, the brand new Jaeger-LeCoultre Geophysic Universal Time or the Patek Philippe Ref. 5130 (which is the worthy successor of the early world-timer watches developed by Louis Cottier for Patek Philippe – explained here, with the Andersen Geneve Tempus Terrae). The world in fact comprises not 24 but 37 times-zones, as the 13 of them aren’t based on a full hour gap but on half-hour, quarter-hour or three-quarter-hour offsets (like in Russia, India, Australia or North Korea). Watches that can displays the entire set of time-zones are… rare, extremely rare. The Vacheron Constantin Traditionnelle World Time is part of them. 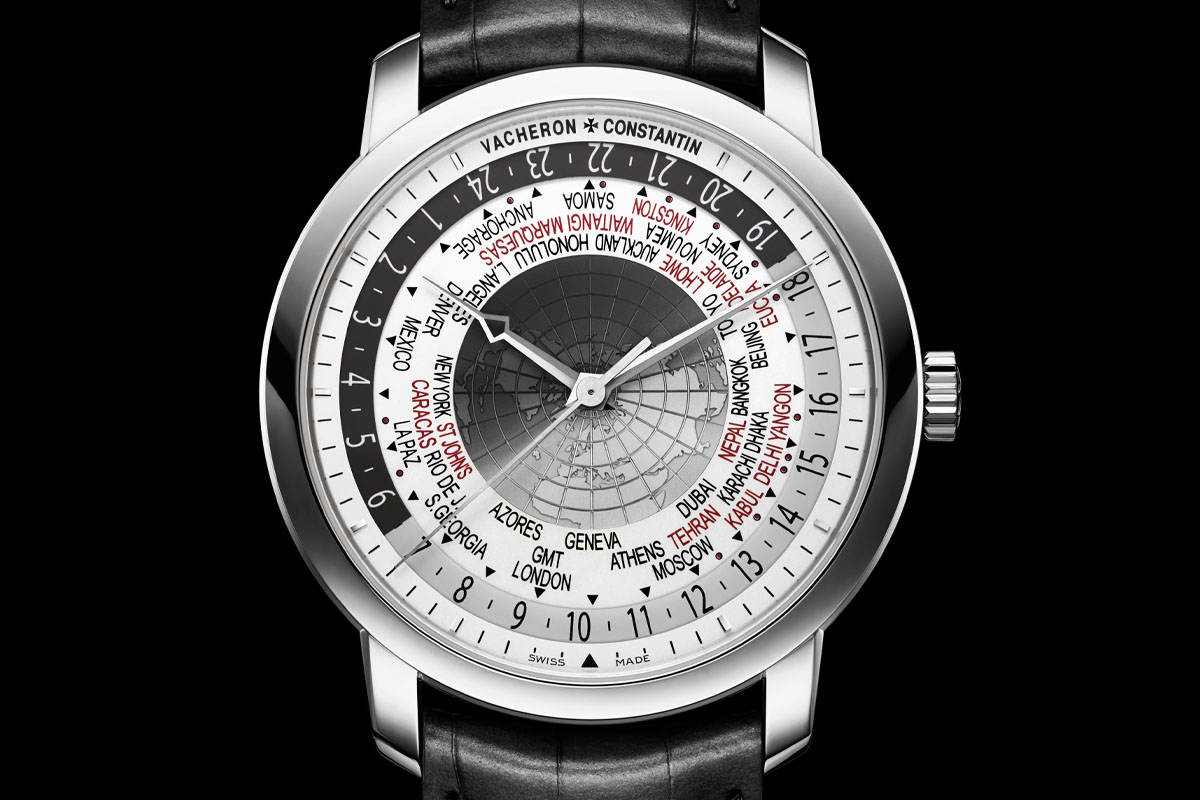 Its architecture is typical of the world-time watches (with a rotating hour disc and a city ring). However, what might seem as a very busy city ring in fact is an extremely precise one that allows you to have a view on the 37 different time-zones around the world, including the half-hour, quarter-hour or three-quarter-hour offsets. This watch was the first to do it – and it is still one of the few. Another typical feature of the world-timers is the dial depicting a map of the world in its centre. This allows to have a quick look at the time in certain parts of the world, and linked to the hour ring, to know approximately where it is day-time and where it is night-time. 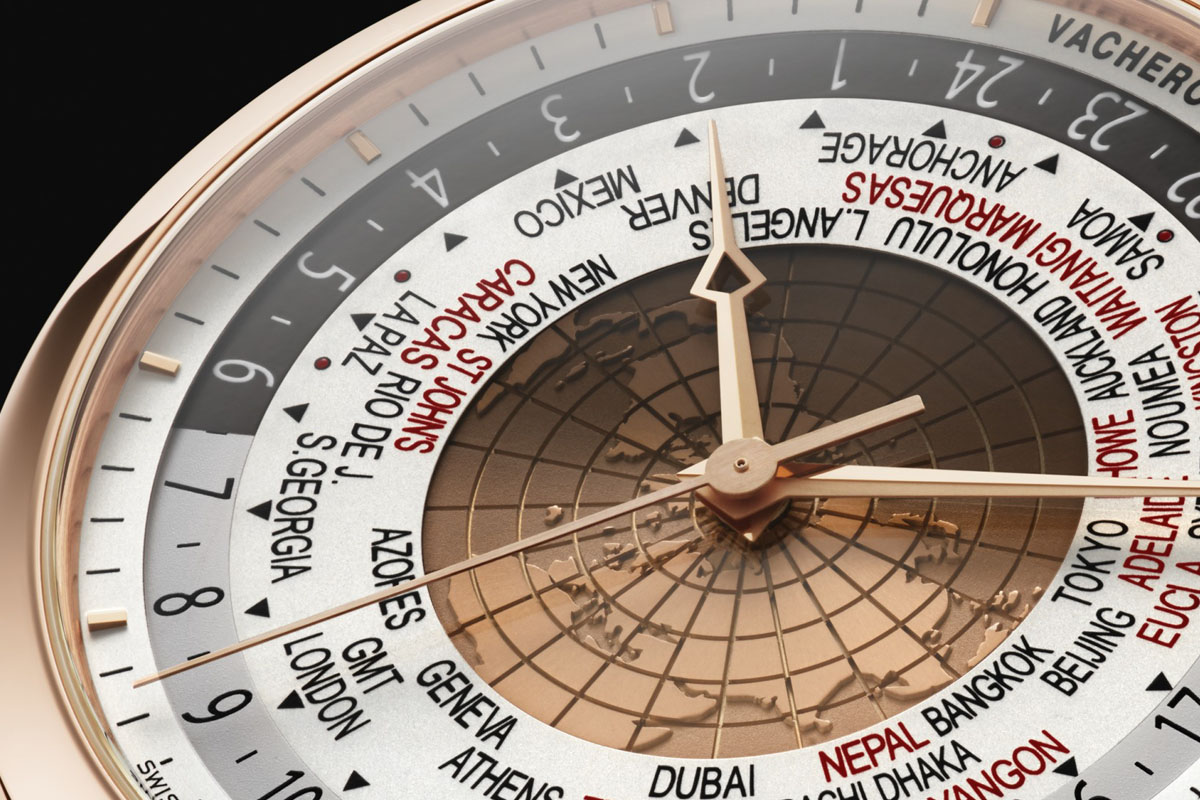 On the Vacheron Constantin Traditionnelle World Time, there’s something more, an partially tinted sapphire crystal over the world’s map that move consistently with the hour-ring. The darken zone of this crystal passes over the map to indicate where the sun is down over the world. The main novelty of this 2015 edition of the Vacheron Constantin Traditionnelle World Time is its dial, especially the world’s map. Previously painted in blue and white, it is now made of solid gold, 3D-engraved, with raised continents with a sun-brush finish and sand-blasted seas. A geometric pattern on the top helps to locate the 24 main time-zones. The inked 24-hour ring is also redesigned, with a darken area from 18h30 to 6h30, in order to bring a simple but efficient day-night indicator. 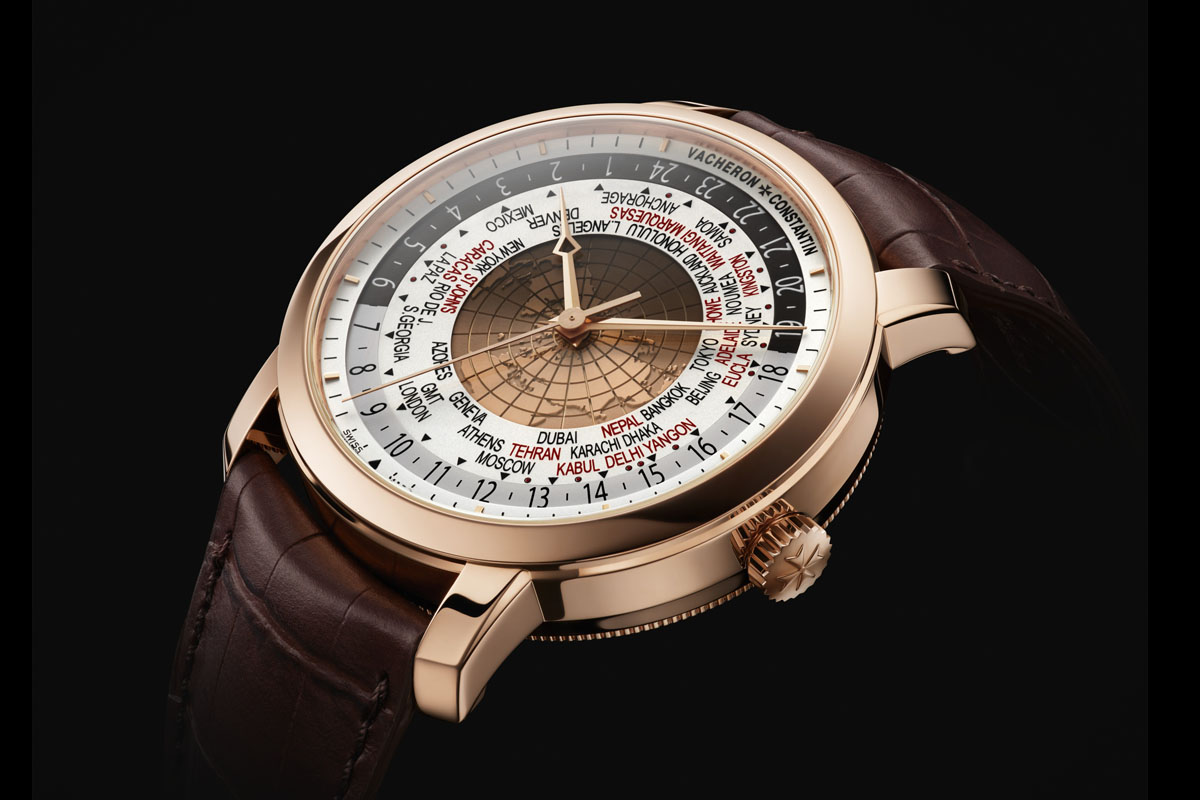 The rest of the watch remains identical to the previous edition of the Vacheron Constantin Traditionnelle World Time, with the same 43.5mm case and the same movement, the Calibre 2460 WT – a self-winding engine, beating at 4hz, with 40 hours of power reserve and all adjustments done by the crown. This movement is finished with great care and adorned with the Hallmark of Geneva.

Could this be the thinnest mechanical watch in the world? Jaeger-LeCoultre Master Ultra-Thin Squelette (specs price)

Hands-on with the 2015 collection of the A. Lange Sohne Saxonia (live photos, specs price)