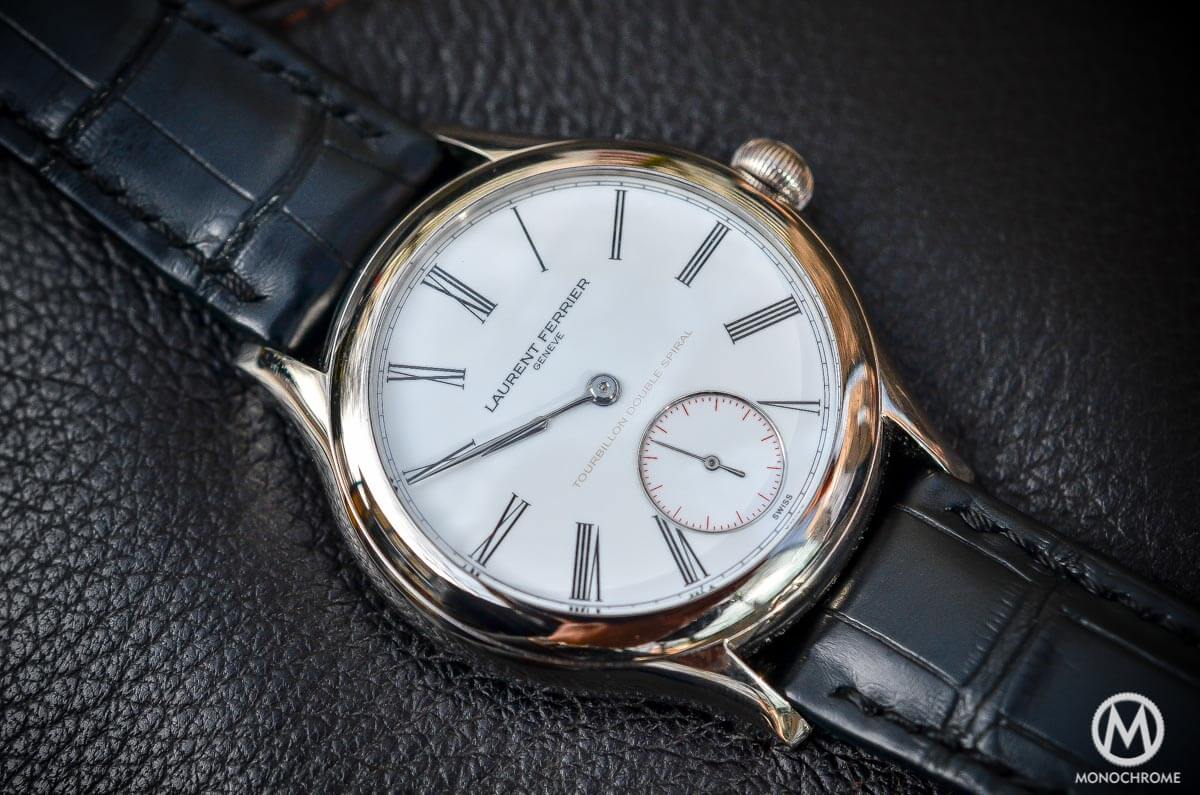 We’ve been reviewing what is arguably the most understated wrist watch. We’re used to explaining high prices to people when they spot something extravagant on our wrist. In this case it was more difficult to explain, until the watch was turned turned over to show that stunning movement, featuring a tourbillon with double spiral. While the average watch-person (is that a word?) hardly understands what a tourbillon is, or does, try explaining a tourbillon with two spirals, and that’s exactly what we’re going to do. However the Laurent Ferrier Galet Classic Tourbillon Double Spiral holds so much more to justifiy its price. Ultimate refinement, the epitome of a dress watch, and understated to the max. 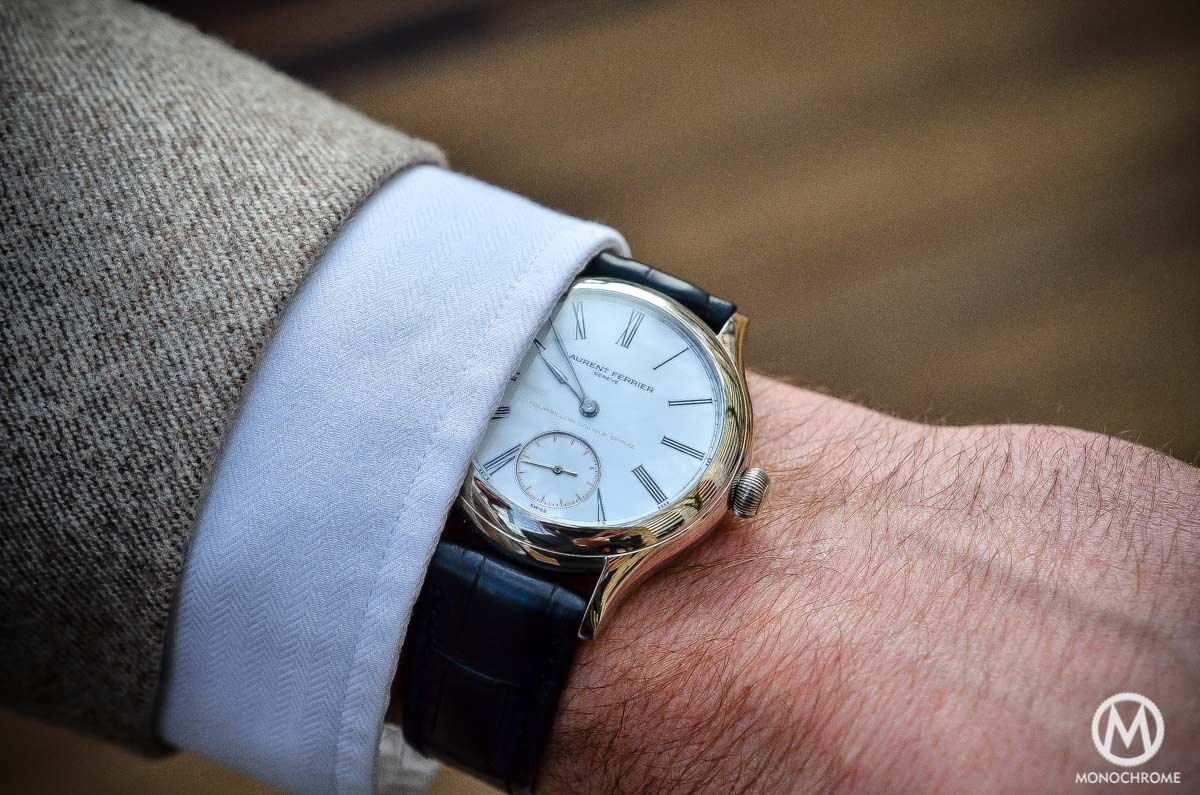 My wrist has had the pleasure of … err… testing the most phenomenal timepieces of modern times. Whether it be the outgoing Roger Dubuis Pulsion Skeleton Flying Tourbillon, the quirky Hautlence HL Ti, or the mighty Lange & Söhne Double Split, the classy Datograph Up/Down, the classic Lange 1, or the futuristic De Bethune DB28 Black Matte. From very classic looks to very outgoing, and usually people do immediately expect an equally impressive price tag. In this case however, the watch in question is so incredibly understated that it really needs much more explaining. When I explained about the tourbillon, at least watch aficionados understood – it’s not a normal tourbillon, but one with two spirals that ‘breathe’ in the same rhythm, yet they are attached exactly opposite and this (theoretically) eliminates any timing-imperfections due to the pinning position of the spring(s) or the bend of the terminal curve. In other words, it needs a knowledgeable person to appreciate such technicalities to the fullest. 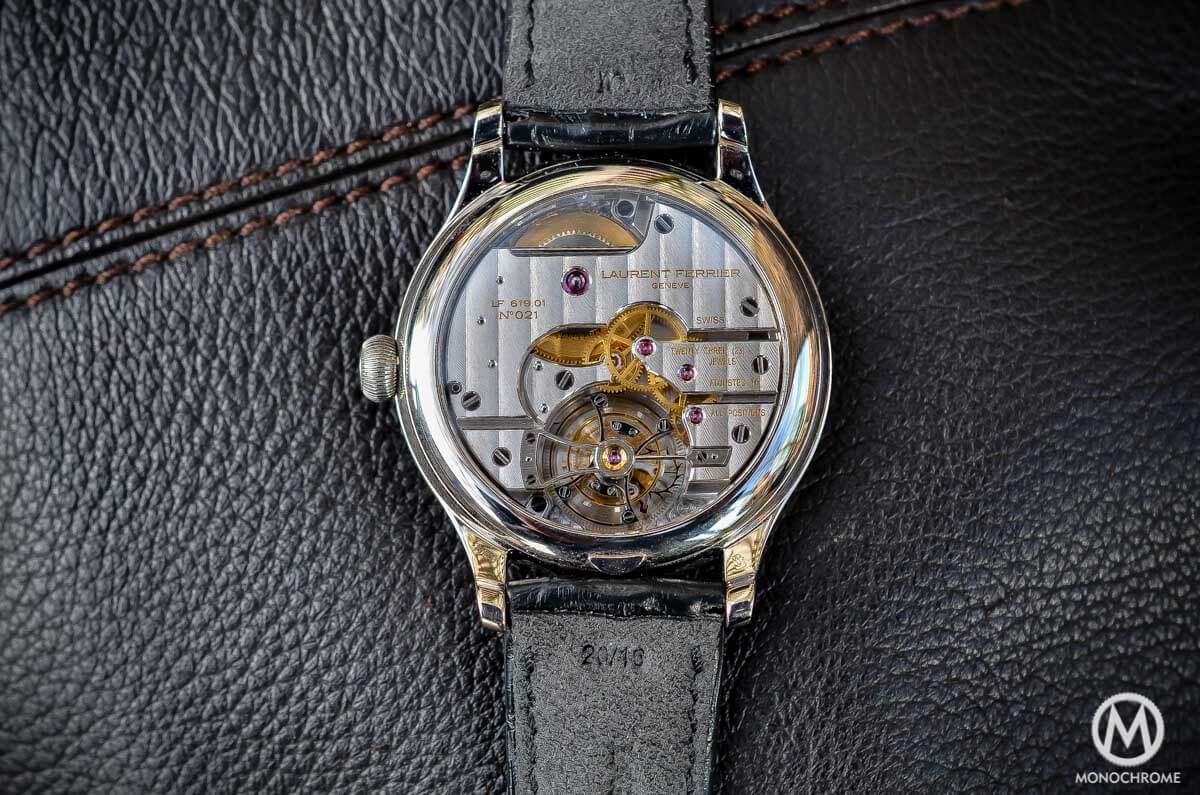 We could easily spend an entire paragraph on the ‘overall appearance’ however let’s suffice with the fact that it is THE most understated watch that I know off. It is really the ultimate dress watch: clean, classic, time only, made in white gold and featuring a pale white enamel dial with sleek Roman numerals. It comes on a nice hand-stitched, mildly padded, alligator strap that is closed with a white gold pin buckle. Nothing outrageous, no crazy stuff. Until you flip it over and see what’s ticking inside.

Let’s keep this paragraph short ‘n sweet. It’s a round white gold watch, that measures 41 mm in diameter and 12.50 mm in height (including the domed spherical sapphire crystal, while the metal alone measures 9.50 mm in height), and it comes with a two-part white enamel dial. As already mentioned, the Galet Classic Tourbillon Double Spiral features a tourbillon with double spiral. Not your ordinary tourbillon, however later more about this. The watch has a sapphire crystal case back, through which you can see the beautifully finished movement. 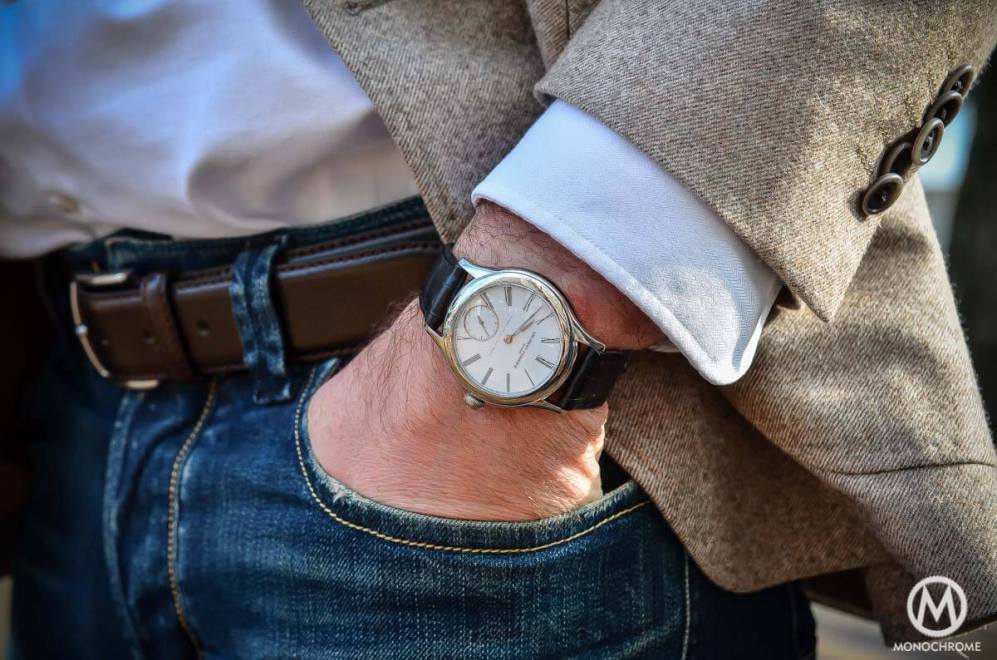 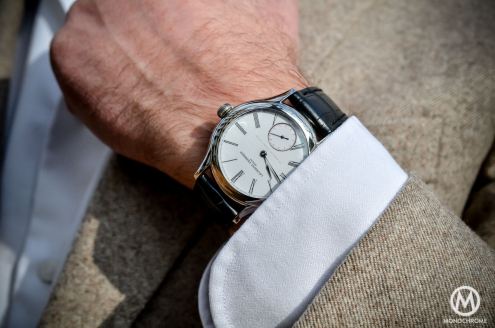 The Galet Classic features an enamel dial, actually a two-part enamel dial, because the small second sub dial is slightly lowered with respect to the main dial. Since the process of creating an enamel dial is quite delicate – in the process more dials fail than get through – and it is not possible to create one dial with two levels, in enamel that is. The only way to create a multi-layer enamel dial, is by ‘inserting’ a smaller dial into an aperture in the main dial. You’ll see a metal rim around the small seconds sub dial. 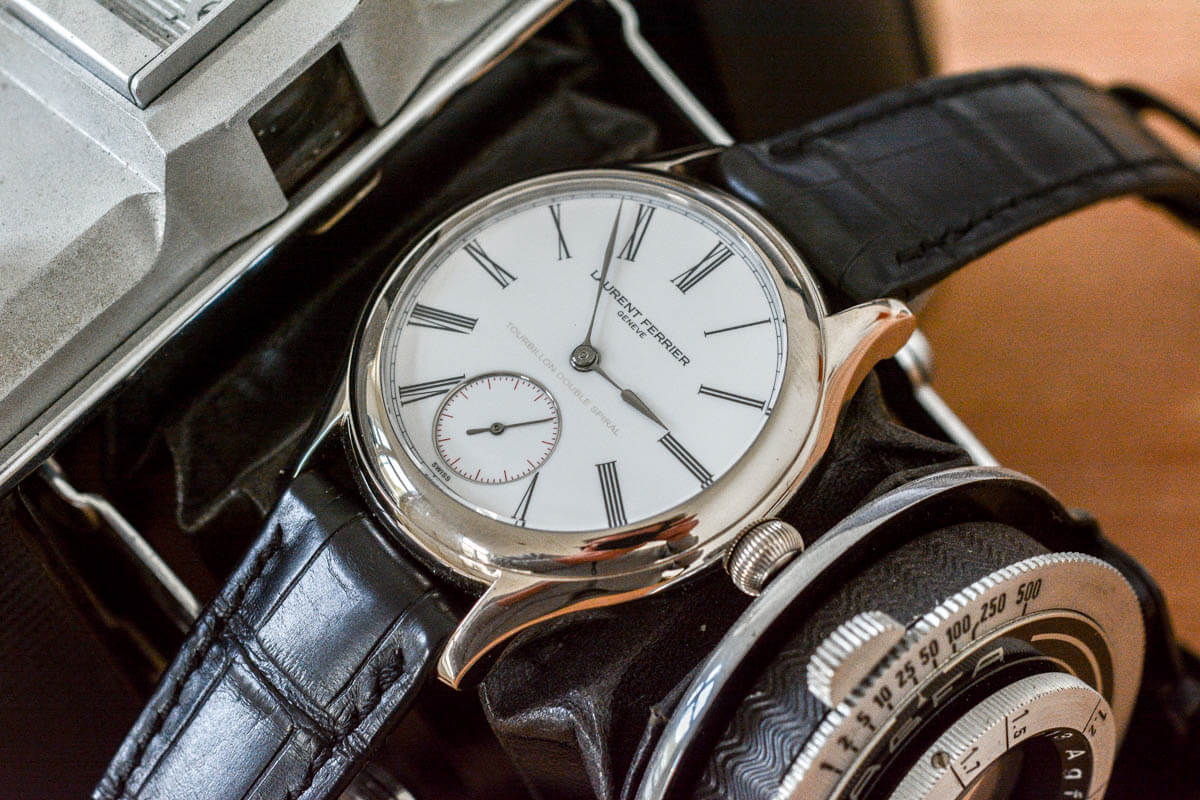 Since the enamel dial is rather fragile, the edge of the aperture is fragile as well. This metal rim ‘protects’ the edge and this is the classic way to insert another level into an enamel dial. The hour markers, sleek and long Roman numerals, are hand-painted on the dial. On the dial’s perimeter is a rail track minute index, and similarly, on the perimeter of the seconds sub dial are short black stripes as seconds indices, intermittent with five-second markers in red.

“TOURBILLON DOUBLE SPIRAL” is printed, in a beige/gold colour, just below the centre and above the small seconds sub dial. Above the centre is the brand’s name and home town (Genève) printed in black. The hands are just perfect in length; the hour hand just reaches to ‘touch’ the hour markers, while the minute hand ‘touches’ the rail track minute index. These are details that might sound like something you would expect to see on every high-end watch, however you’d be surprised to see how many brands forget such details; important details in my book! 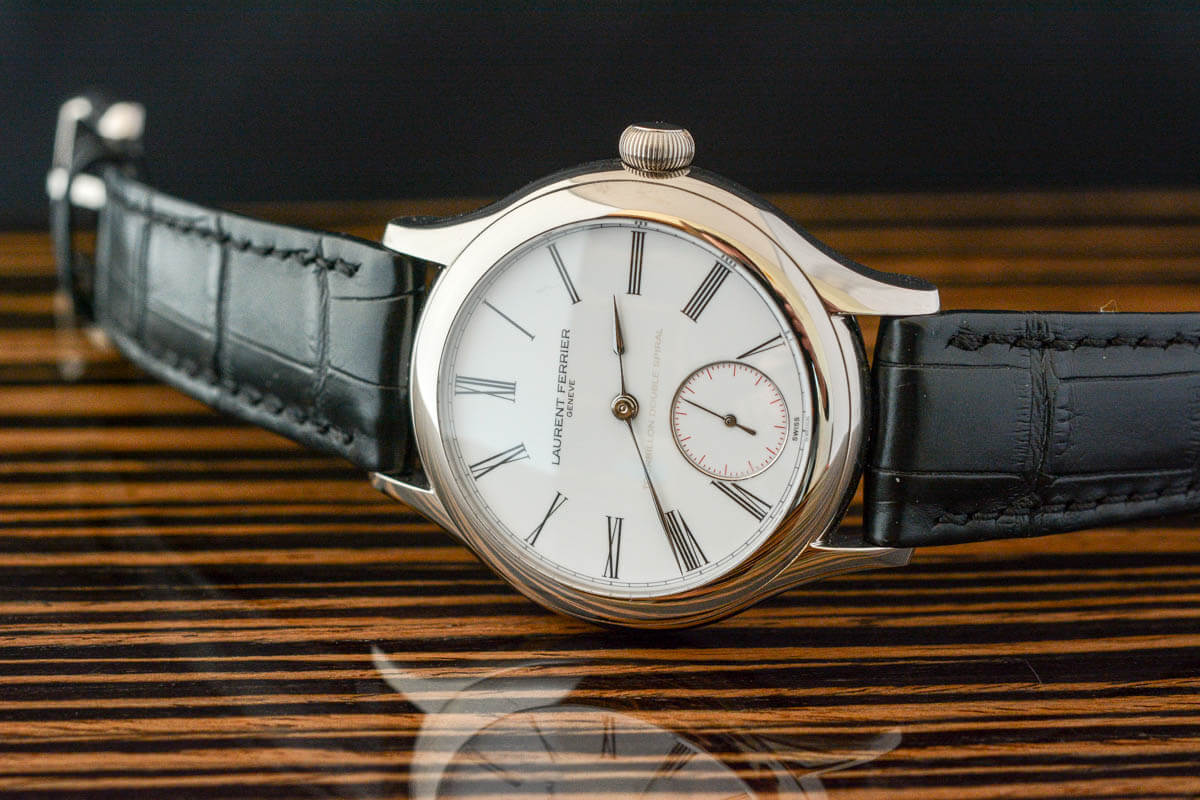 The hour and minute hand are so-called “assegai-shaped” meaning they resemble a spear head. All three hands, including the small second hand, are executed in 18K white gold. The second hand is a baton-shaped hand, with a counterweight. The hands are beautifully rounded and polished by hand and look just awesome.

The white gold case is just exquisite. On first glance you might not see what I mean, and honestly, neither did I. When you spend more time with this timepiece  you’ll see so many small, but very pleasing details that take this watch to another level. Nearly impossible to catch on photo, because I’m talking about a specific curve in the case side; a curve that can only be made and finished by hand. Also the flatted/roundish (they call it ball shaped) crown for instance, which looks like it’s in similar proportions as the entire case, yet much smaller. It is actually a bit ‘chubby’ case, however that is exactly what allowed the folks at Laurent Ferrier to do such magnificent finishing and create those lovely curves. As said, impossible to catch on photo, however I can assure you that after handling quite a few high-end watches, this one arguably features the most ‘seductive’ shapes and curves. Just look at it from various angles… 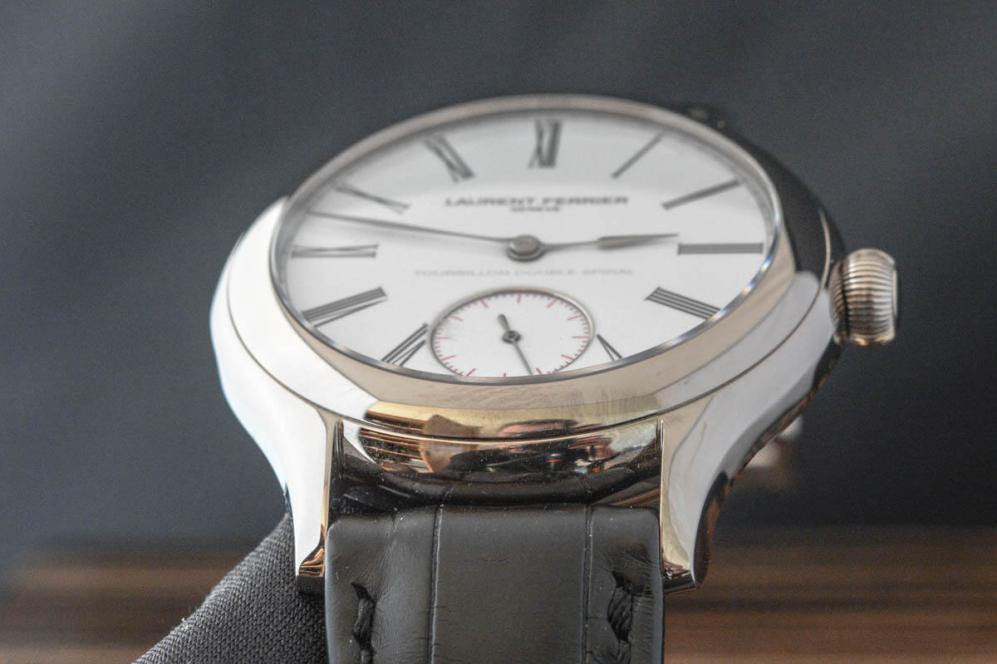 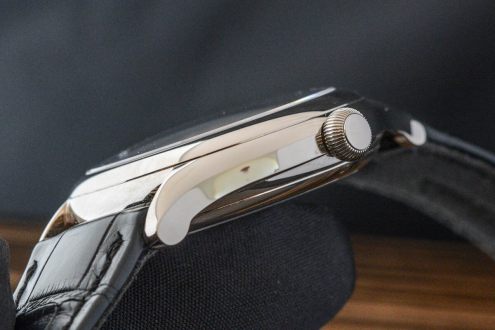 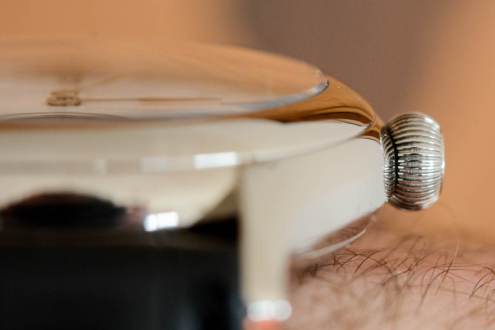 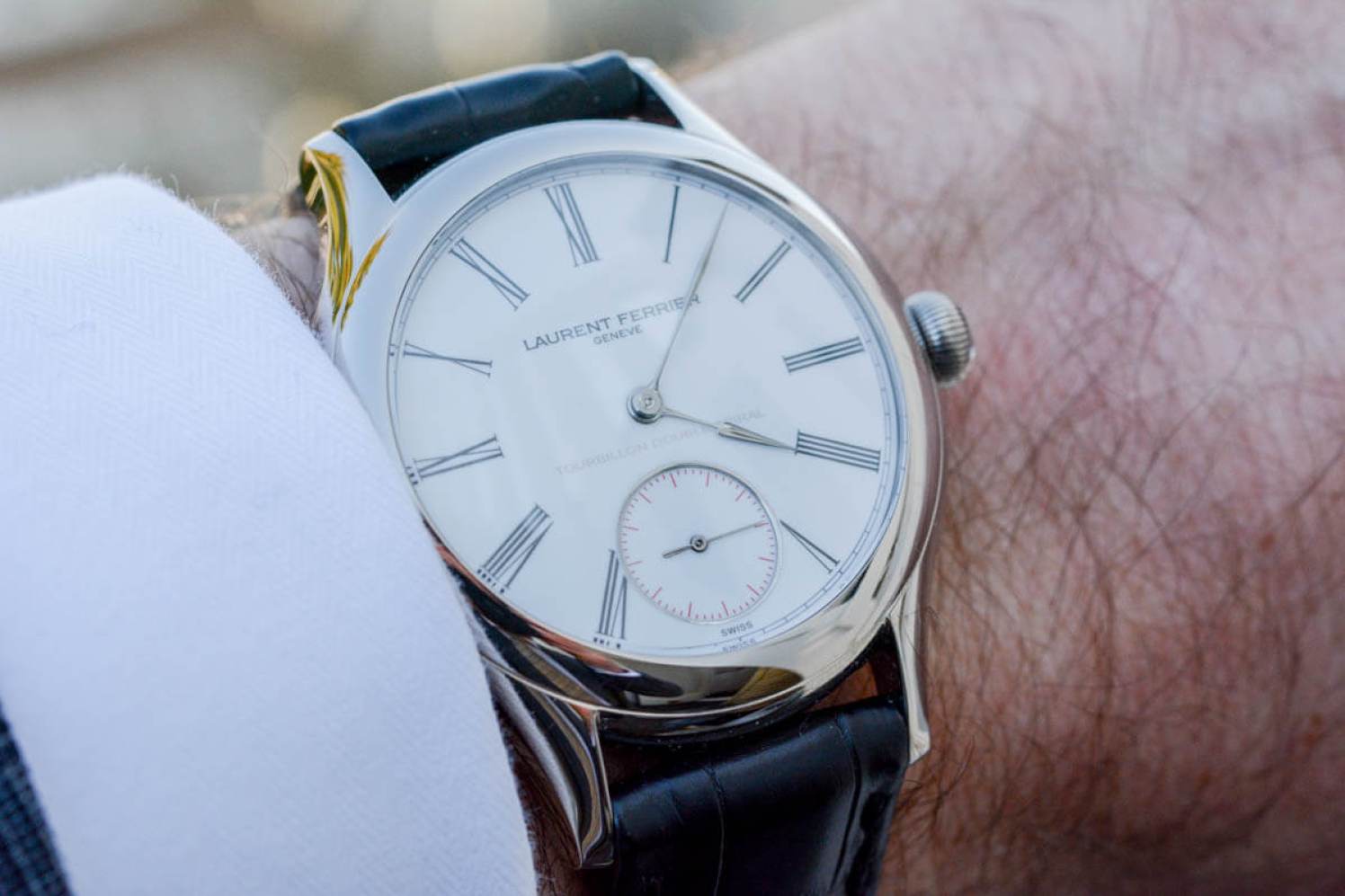 It is also not the smallest case, and when we would be very strict, it would not qualify as a classic dress watch. With a case measuring 41 mm in diameter and 12.50 mm in height (including a domed spherical crystal) is would be slightly too big and certainly too thick. However with its shapes and proportions, it is actually the epitome of a dress watch. Moreover, it wears very comfortable and due to size and weight you know that you’re wearing a very precious timepiece.

Now the movement, there’s the part of this gem that does immediately gets the oooohhh’s and aaaahhh’s. It is indeed a superbly finished movement and especially the tourbillon cage and bridge are absolutely stunning. You can easily recognize the large main spring barrel, and the gears that lead the energy towards the tourbillon, where it will be released at a pace of 3Hz or 21,600 vibrations per hour. The main spring barrel holds enough energy for 80 hours of autonomy when fully wound. 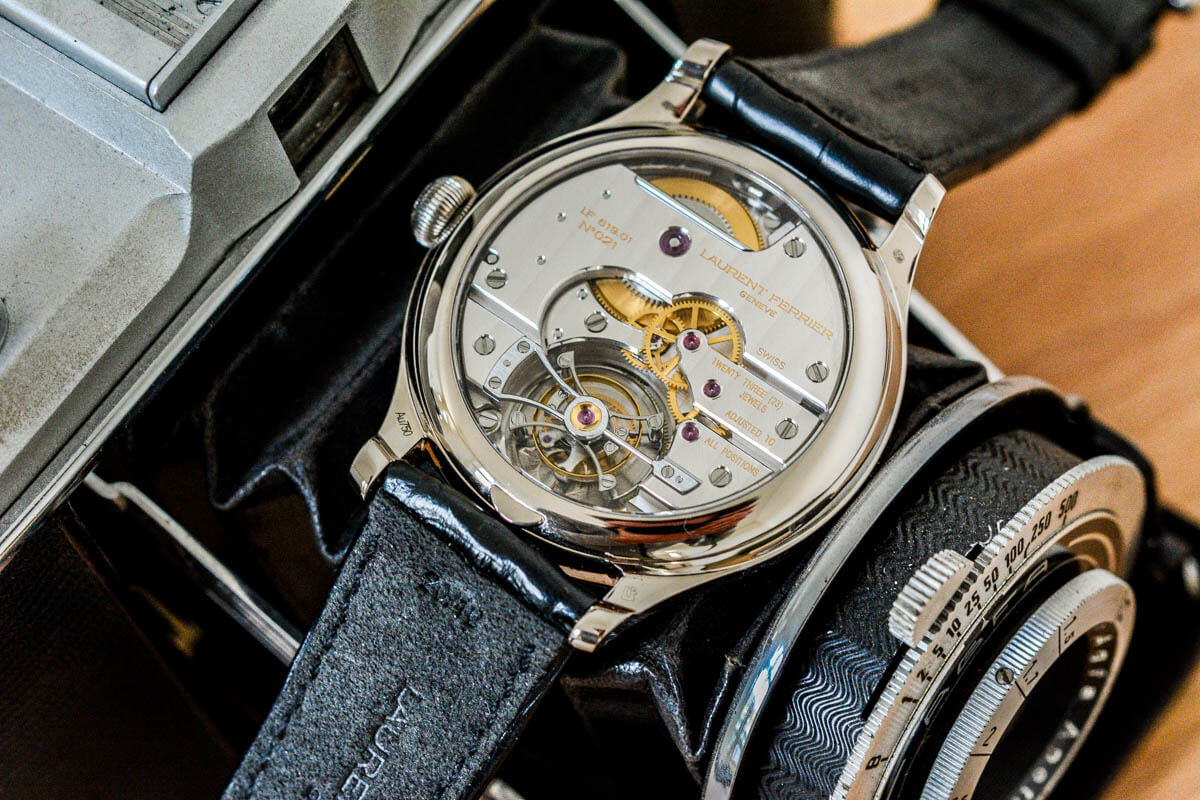 As you can see, the movement fills the case pretty well. No movement spacer rings, no empty space around the movement, so certainly no small movement in a big case. That’s a sign of Haute Horlogerie, or at least that should be a sign of proper high-end watchmaking (unfortunately there are still high-end brands that serve a small movement in a large case, often with a big spacer ring around it to make it fit in the oversize case). Calibre LF619.01 measures 14 ligne or 31.60 mm in diameter and is 5.57 mm thick. It isn’t a small movement, however that would be nearly impossible with that tourbillon with two spirals.

The spirals are banked opposite, and the potential chronometric divergency due to the banking and terminal curve, should be leveled out. That entire set of two spirals inside a tourbillon cage, make a full rotation in 60 seconds, and that also has its positive influence on chronometric precision. 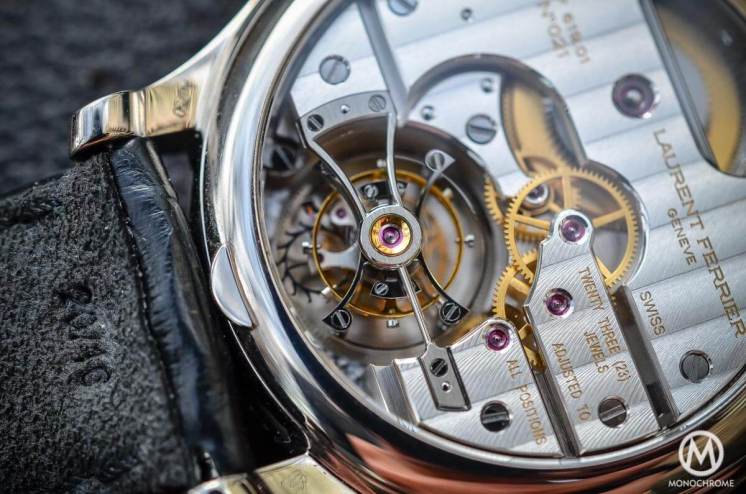 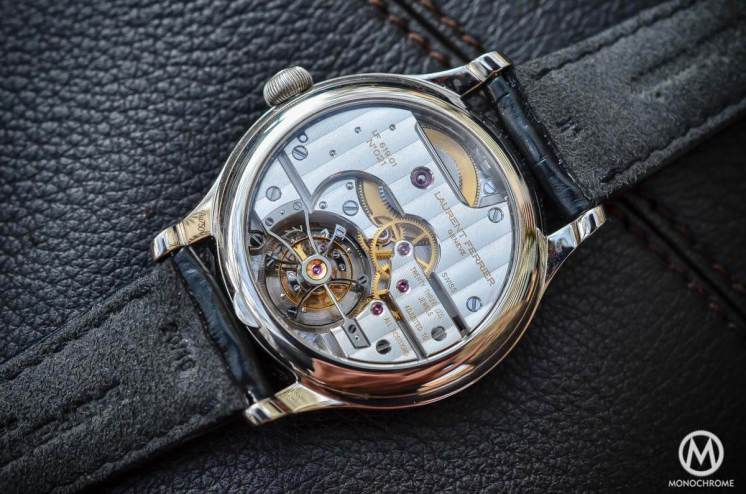 There’s simply a lot to look at. The movement comprises 23 jewels so all pivots, gears and what more, rotate without friction. The bridges, which are very beautifully designed, are all hand finished. Côte de Genève striping, beveled and polished edges, the main plate is adorned with pèrlage, and the gears and gear spokes are all finished by hand. The movement’s design is just lovely, and the finishing is of the very highest level possible; the works!

This is probably the most understated dress watch on the market right now. No showing off, this simply isn’t the watch to impress the average watch aficionado. No, this is the kind of watch that will impress those in the know and it will impress them massively!

The Laurent Ferrier Galet Classic is one for gentlemen who prefer to ‘fly under the radar’ while they know what is on their wrist and enjoy the feeling of the ticking escapement and rotating tourbillon with double spiral. With a price of CHF 180,000 Swiss Francs it certainly isn’t a watch for everyone. However those who can afford a beauty like this know that they have something extremely special, and quite rare. 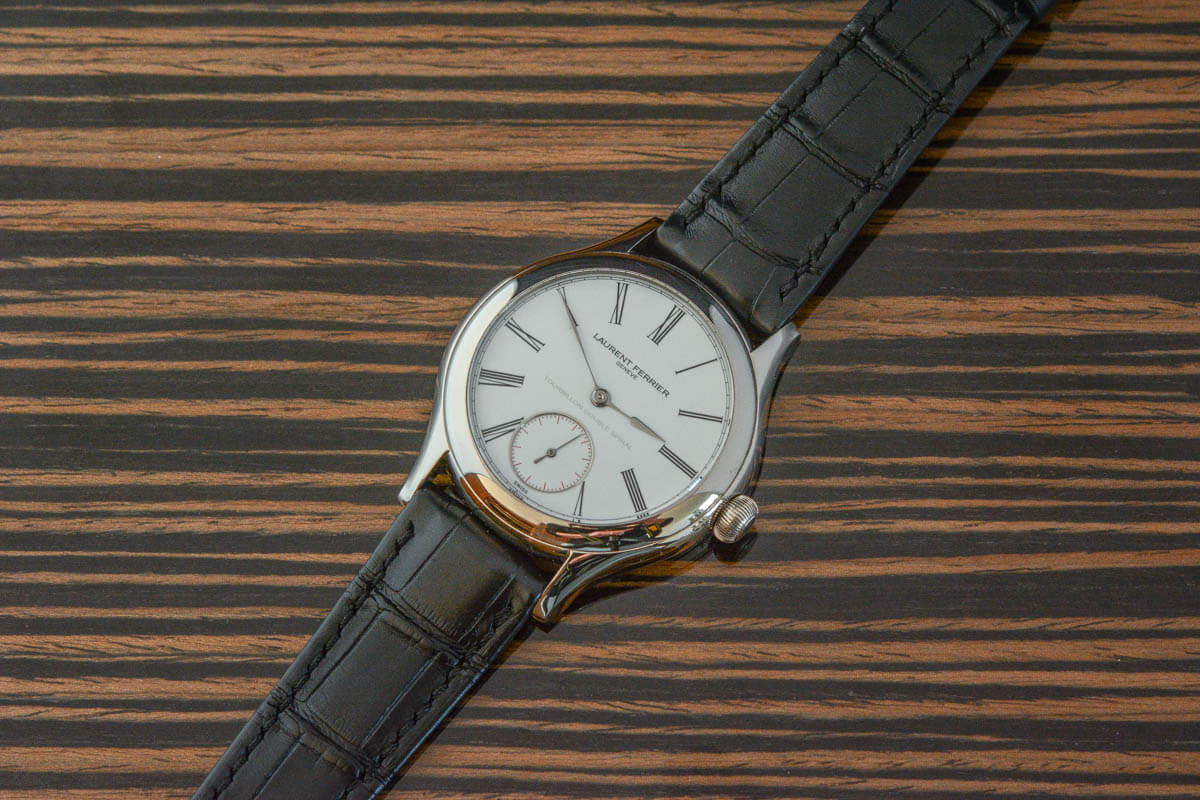 More information about the Laurent Ferrier Galet Classic Tourbillon Double Spiral, the various dial options and choices of metal, and its availability: www.laurentferrier.ch