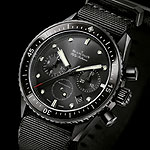 In recent years I’ve taken to “pimping out” my new and old watches, some of them military watches, by replacing their original straps with colorful NATO straps. At this year’s Baselworld, I found that I may have helped start a military watches trend, as I saw many new watches that had these military-style cloth straps as original equipment. In this article from my blog, Watch-Insider.com, I showcase 10 of these military watches.

I started swapping out original straps for NATO straps a few years ago. At first, I purchased the straps from the Australian website www.natostrap.com. These days, I mostly buy them at MisterChrono, a retailer at 23, Rue Danielle Casanova near Place Vendôme in Paris, or online at the shop’s website, www.misterchrono.com.

I do not want to claim that my affinity for NATO straps influenced some of the product managers of these well-known watch brands, but who knows? In the case of at least one brand, I can claim some direct responsibility for the decision to use this type of strap: Blancpain’s Marc Hayek saw me wearing one in a meeting and decided on the spot that the brand would start using them. (One of those Blancpain watches is shown below.)

Where does the NATO strap come from and where did it get its name? Here’s a little bit of history for you:

The original NATO watch straps were created by Great Britain’s Ministry of Defence in the early 1970s and in 1973; they became part of the standard equipment available to British soldiers. They took their name not directly from the North Atlantic Treaty Organization but rather from the 13-digit stock number recognized by members of NATO (it is also referred to as the NATO Stock Number or NSN). The soldiers could requisition a strap by filling out a form known as G1098, which was usually shortened to G10. Thus, a member of the military who wore it did not call it a NATO strap but a G10. These first NATO straps were made of grey woven nylon, and their buckles and keepers were made of chromium-plated brass. One of their defining benefits was that the watch had a fixed pin ensuring that the strap would not break and cause the watch to be be lost. The great length of the strap made it possible to f it the strap comfortably around a uniform.

I don’t know for sure which watch brand was the first one to use them officially, but I assume it was Tudor. The Tudor watches have straps that look very similar to original NATO straps, but they are fixed to the watch in a different way. If you want to change them, you’ll need to take out the spring bars, while with a true NATO strap you just thread the strap through the mounted spring bars. The Tudor Heritage Chrono Blue from Baselworld 2013, shown below, is an example.

Interestingly, this seems to have only been a trend at Baselworld. I don’t recall any of the brands at this year’s SIHH presenting a watch with a NATO strap in Geneva last January. But surely it’s only a matter of time before Audemars Piguet, Baume & Mercier, IWC, Jaeger-LeCoultre, Panerai, Richard Mille, Roger Dubuis and other SIHH brands will jump on the bandwagon.

Now let’s have a look at 10 watches equipped with original (not replacement) NATO straps.

Watch Insider: 10 Watches From 2014 With That “Certain Something”