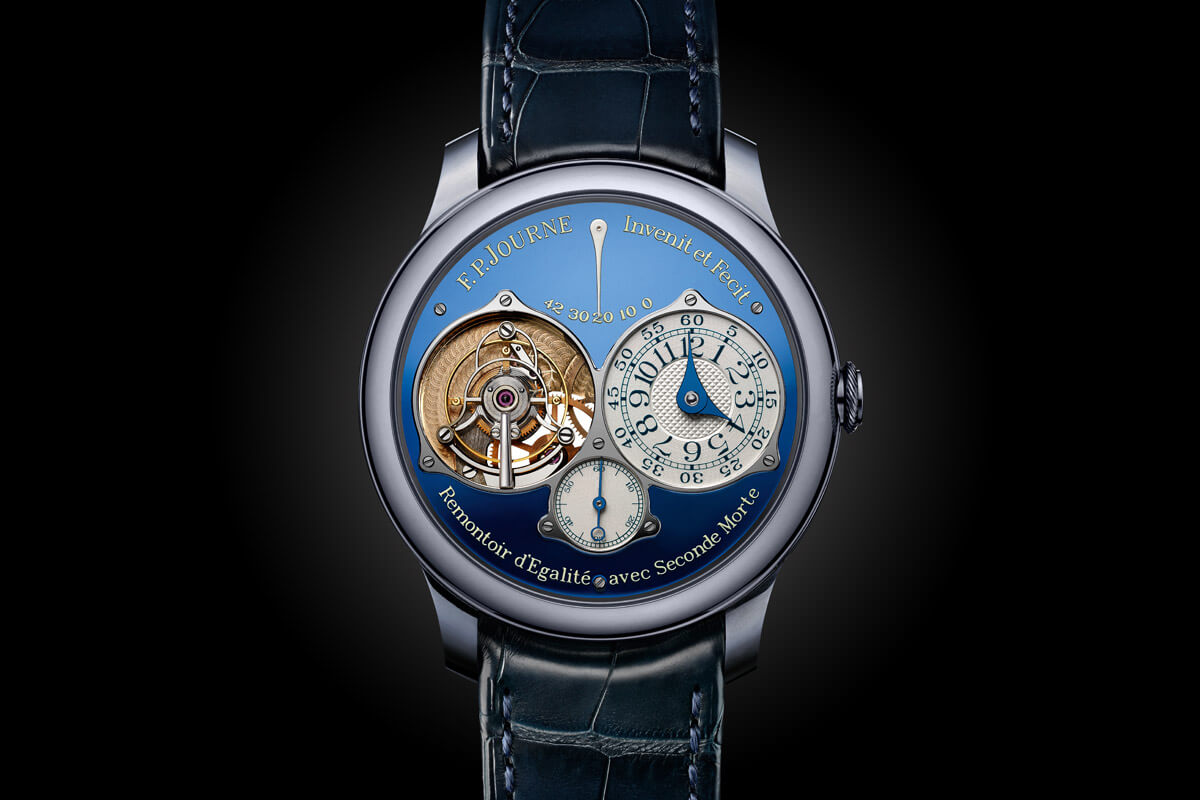 Amongst the 43 unique watches that Only Watch 2015 will count, we’ve already seen quite a few interesting ones (yes, that’s an understatement…). Whether it’s the superb Laurent Ferrier Sector Dial, the Voutilainen GMT-6 or the future record-breaker Patek Philippe 5016A, all the watches we’ve seen so far are stunning and highly desirable (meaning possible huge prices reached). Another brand just announced its participation and, again, it’s a stunner. Here is the Only Watch 2015 FP Journe Tourbillon Souverain with a blue chrome dial and a tantalum case.

This new iteration by FP Journe that will be proposed for Only Watch 2015 is again relying on a non-precious material. It’s seems to be frequent nowadays for brands that create unique or very limited editions to come with the most complicated watches possible, with a high-end level of finishing but with a low-end material for the case (stainless steel or titanium) instead of the usual platinum or gold featured on the regular production pieces. However FP Journe, even if also banning these precious metals, goes for something quite out-of-the-range and that he loves to use: tantalum. 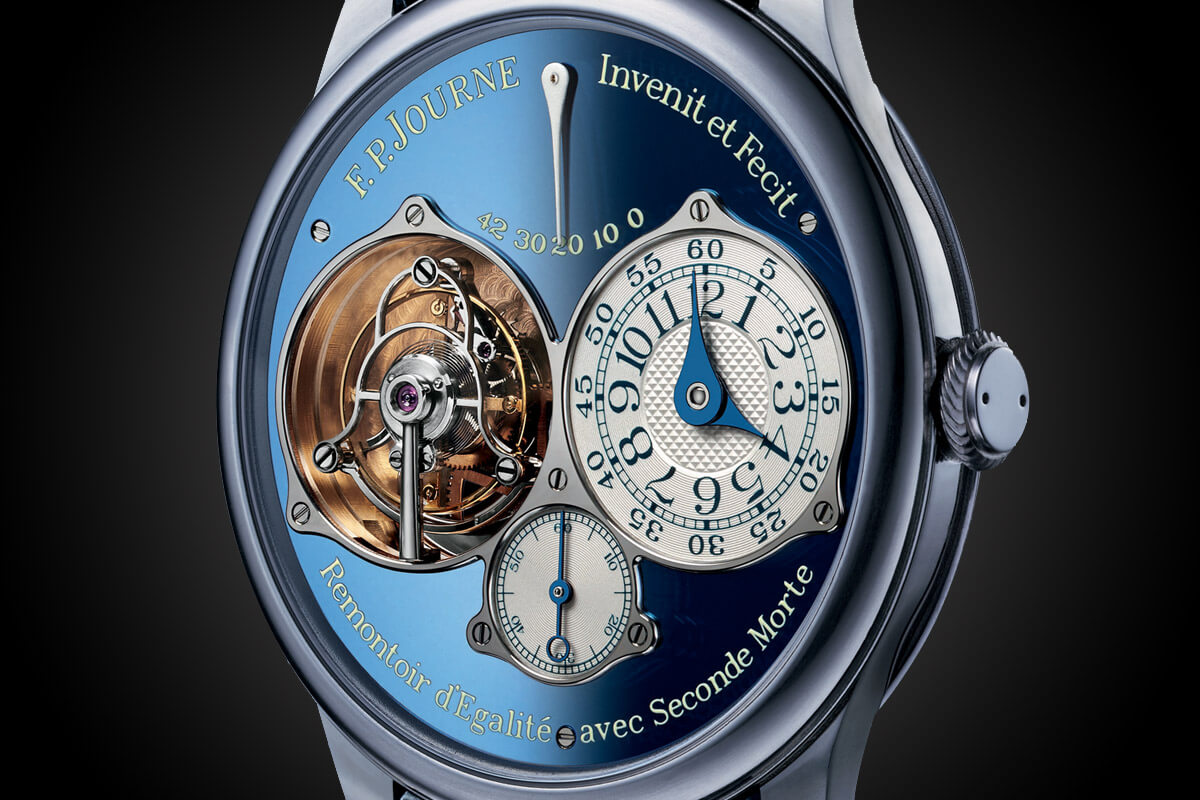 The unique FP Journe Tourbillon Souverain for Only Watch 2015 is dressed in the same metal than the entry-level watch from the manufacture, the Chronomètre Bleu. This dark grey metal with blue overtones, used for the first time in the context of the Tourbillon Souverain, is known to be extremely hard and resistant to scratches (and to corrosion) but also complicated to machined and heavy. The inspiration of the Chronomètre Bleu can also be found in the dial that shows the same glossy, mirror like blue finish. This dial composed of multiple layers of lacquer (polished in-between each application) reflects light like (almost) no other dial and looks like chrome plated – thus changing its character according to the color of incident light from almost black to vivid blue. 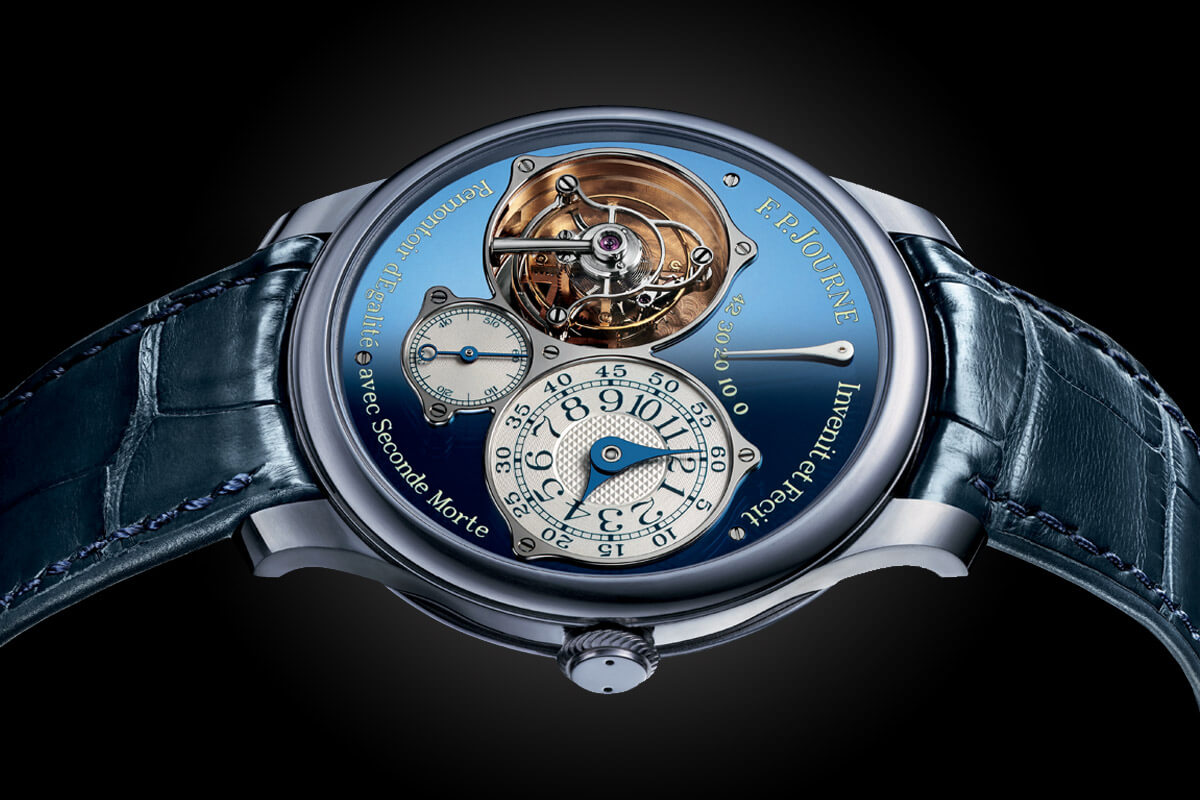 The dial exposes its regulating organ at 9 in a large aperture. On the right side of its dial, the FP Journe Tourbillon Souverain Bleu features a sub-dial that displays the minutes and the hours. At 12 sits a power reserve indicator and at 6 a small second sub-counter. Already impressive on its own, this watch is in fact technically more subtle than just being a tourbillon with off-centred display. The regulating organ is indeed linked to two complications. The first one is a remontoir d’égalité that plays the role of a constant force device. As we’ve seen with the Chronomètre Optimum, it allows the energy to be delivered with a constant force to the escapement. It releases an identical portion of the available energy in one-second intervals and thus giving stable amplitude to the balance. The second complication is a dead beat second (a.k.a. seconde morte in French) that is directly linked to the remontoir and thus being a true and instantaneous complication.

As usual with FP Journe, the movement is entirely developed, assembled and finish in-house in Geneva, with haute horlogerie standards. The main plate and the bridges are both machined from 18k red gold, like all the production of FP Journe. This self-winding movement boasts 42 hours of power reserve.

This unique FP Journe Tourbillon Souverain Bleu in tantalum for Only Watch 2015 will be part of the Only Watch charity auction of 43 unique timepieces taking place on 7 November 2015 in Geneva and hold by Phillips Auctions. It will be sold to raise funds for Duchenne Muscular Dystrophy. More details here.

Highlights from the Monaco Auction by Artcurial Watches, including tropical Daytonas and a superb Breguet Set of watches