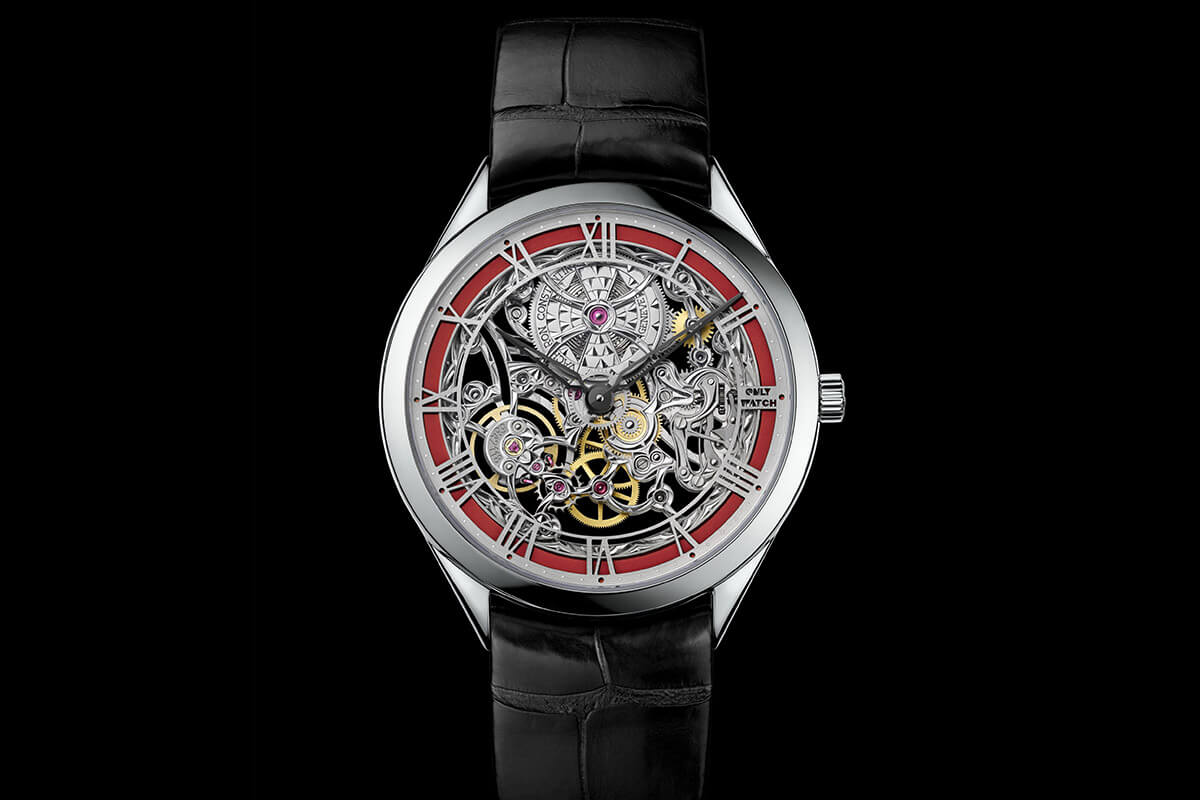 The news about unique pieces for the Only Watch auction, of which all proceeds will go to the Monaco Association Against Muscular Dystrophy, is pouring in. Vacheron Constantin has been one of the watch brands that has supported this prestigious charity auction since the very beginning, back in 2005. This year they support the good cause again, with the donation of the Vacheron Constantin Métiers d’Art Mécaniques Ajourées; a watch that showcases the typical metier d’art that the brand is famous for.

Like the Armin Strom Skeleton Pure that we showed you earlier today, this Vacheron Constantin is skeletonized, or as VC calls it, ‘openworked’. VC has a long history with openworked movements, and their first entirely openworked calibre dates back to 1924. However when you look back further, the very first watch produced by Jean-Marc Vacheron, back in 1755, already featured an openworked and engraved balance-cock. During the 1960’s Vacheron Constantin started with openworked movements for wristwatches, and step-by-step increased the complexity, going from time-only movements to minute repeaters, perpetual calendar, tourbillons and ultra-thin movement. Just search in Google images for “vacheron constantin openworked” and you’ll see an overwhelming number of openworked and complicated Vacheron timepieces.

Surrounding the dial, or the space where you can usually find the dial, is a beautiful red enamel ring, which suits with the colours used for the Only Watch auction. Vacheron is probably the brand that has the most recognizable Only Watch features in the design of their Only Watch pièce unique. 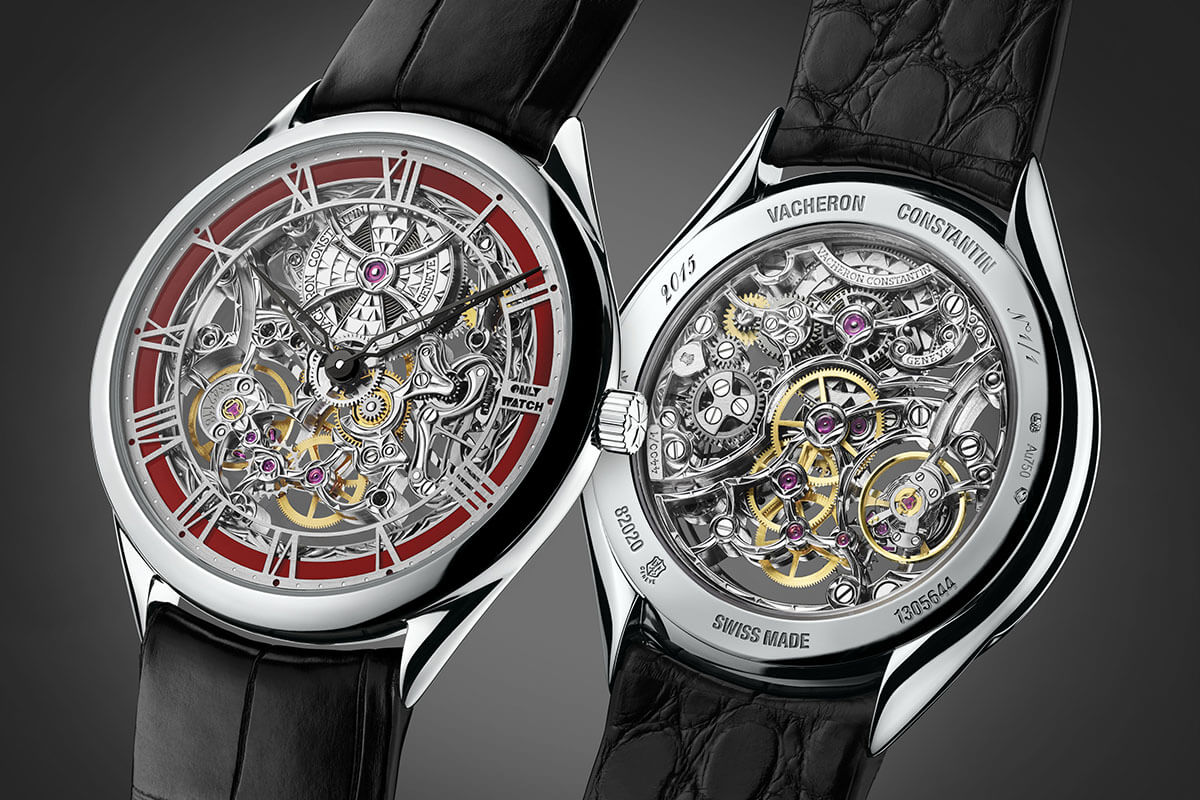 The movement that has been meticulously skeletonized AND engraved is the Vacheron Constantin in-house movement calibre 4400. Vacheron uses this movement in several manually wound timepieces, like the Traditionnelle Small Seconds and the Historiques Americain 1921. Another feat of calibre 4400 is that it bears the Geneva Hallmark, an indication of its impeccable quality, finish and superlative execution. We explained everything about the Geneva Hallmark requirements, including the new requirements that were added three years ago in 2012; click here to read that article.

The openworked version of calibre 4400 is very transparent and shows all gears, pinions, jewels, and of course the openworked bridges and main plate. Like the Armin Strom that we showed you earlier today, this is a watchmaking lesson on the wrist, and I can attest that watching a mechanical movement ‘at work’ is just very relaxing. And in this case it is also very humbling, because such a work of art is awe-inspiring. 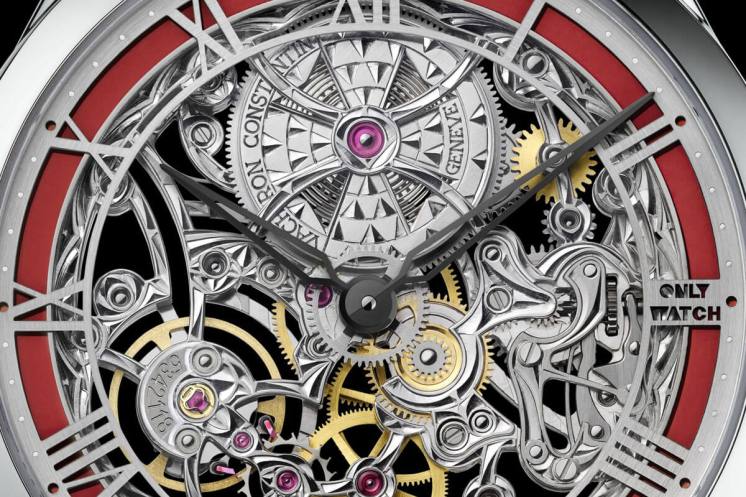 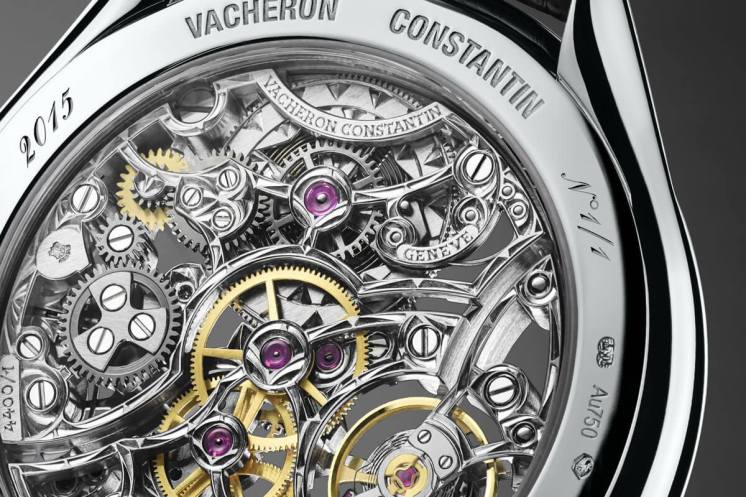 Since we made a reference to the Armin Strom that we showed this morning, it’s of great importance to know that VC’s movement has been openworked by hand! Much different from movement parts that are skeletonized by a CNC machine. Openworking a movement can only be done by very skilled craftsmen and it is a demanding art. It involves hollowing out the movement parts as much as possible, while being careful not to impair rigidity of the movement that is necessary for the movement to run smoothly.

The Vacheron Constantin Métiers d’Art Mécaniques Ajourées pièce unique for Only Watch 2015 has a white gold case that measures 40 mm in diameter and 7.50 mm in thickness. Engraved in the rim of the case back is “Unique piece for ONLY WATCH 2015” and “N°1/1”. When deciding on which of the unique pieces you want to bid, personal taste is of course a very important factor. However also keep in mind that this magnificent piece bears the Geneva Hallmark, is meticulously openworked and engraved, and saves you the costs of a watchmaking lesson. What even more important is that Vacheron Constantin goes the extra mile and adapts the entire design to the Only Watch colours and that actually links this watch in some many ways to the prestigious auction that will be held on 7 November in Geneva.