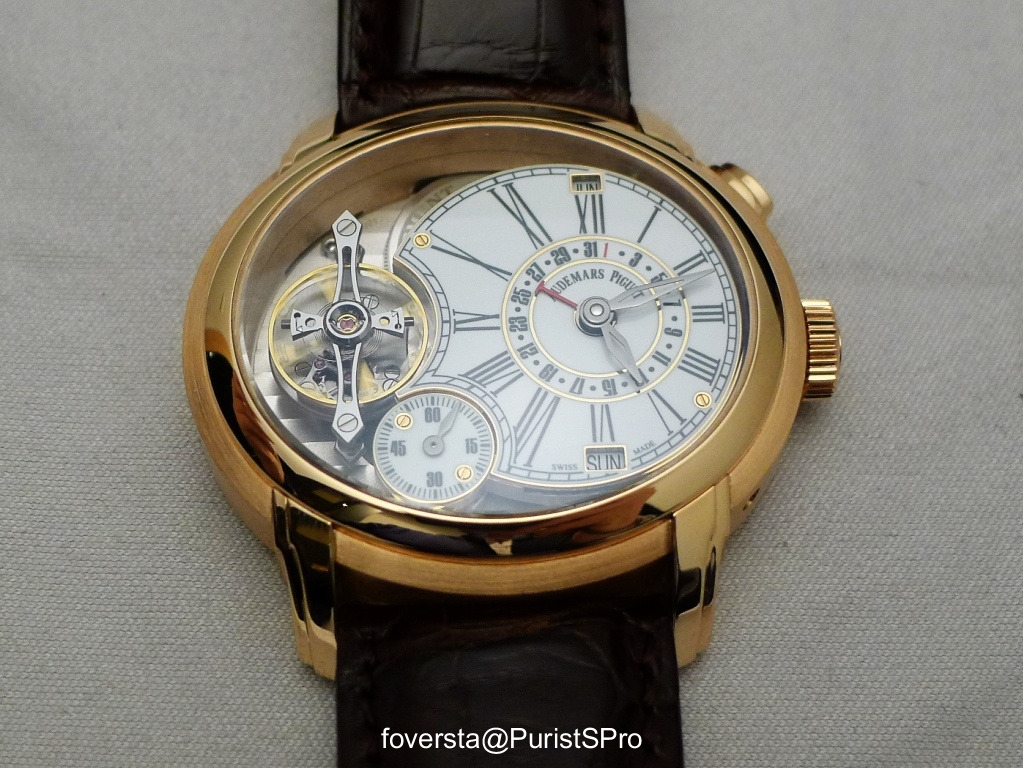 2015 will undoubtedly be under the sign of the Millenary collection for Audemars Piguet. If the 2015 SIHH was distinguished by the presentation of a full line  of handwind Millenary dedicated to ladies, men were not forgotten thanks to the Quadriennium unveiled a few weeks earlier at Watches & Wonders.

Thanks to Audemars Piguet, I improve my skills in Latin! Quadriennium means a period of 4 years, which provides an explanation of the specificity of the calendar proposed by this Millenary. This is actually a leap year calendar, very well known by the  Breitling fans and which needs to be adjusted once every 4 years, at the leap year. Indeed, if the annual calendar requires an adjustment at the end of February each year, if the perpetual calendar avoids any manipulation except in very specific cases (such as the years divisible by 100 but not by 400 which are not leap years), the leap year calendar handles without any flaw the passage from February to March each and every year … except during the leap year. Obviously, in a purist point of view, a leap year calendar can not be considered on the same level as a perpetual calendar even if it is more advanced than an annual calendar. However, I still give it the credit of allowing  us to discover a new complication in the context of the Millenary collection. Without any surprise, the watch has the usual lay-out of the Millenary watches which feature the regulating organ visible on the dial side. The balance wheel and its vertical bridge are located on the left while the right part is dedicated to the displays. The second hand sub-dial and the balance wheel eat a bit the main dial what enhances the visual similarity with the Millenary Minute Repeater. The watch is extremely lively since the balance wheel oscillations are accompanied by the movement of the escape wheel visible under the bridge and by the revolution of the second hand. The left side of the watch is for me the most successful: the bridge of the balance is majestic while remaining aesthetically aerial, the incabloc is rather discreet and the oscillations of the balance wheel offer a mesmerizing spectacle. It is important at this stage to indicate that the Millenary Quadriennium uses  the Audemars Piguet escapement with double hairspring which operates without lubrication and whose objective is to obtain a more stable operation. The double hairspring is intended to compensate the differences in behavior, like a Tourbillon could do it in another context. The right side of the watch was less convincing to my eyes. I find the usual architecture of the Millenary dial with the off-centered axis of the hands. The Roman numerals are thus larger on the left than the right. What gives dynamism to the Millenary 4101 brings however some confusion in the specific case of the Millenary Quadriennium. The problem at the end is the gathering on a relatively small area of ​​the days and months windows and the date display thanks a small hand. I touch here the paradox of the watch. For a calendar watch, whatever it is, the most important display must be the date one because the whole mechanism is made to indicate it accurately or at least, with the smallest number of adjustements. Or the display with a small hand, even in red, makes the legibility of the date more complicated. Still, when viewed as a whole, it emerges from the Millenary the feeling of being in front of a convincing and original design, supported by a high quality execution as evidenced by the enamel dial and the impeccable finishes. It’s more when we come to the purely practical dimension that we reach the weakest point of the watch.

The regulating organ being located on the dial side, the movement bridges side is obviously more static that does not prevent us appreciating the specificity of its lay-out and its decoration. The two ratchets highlight the presence of a double barrel that can be guessed dial side. It provides the watch with a power reserve of one week (for a frequency of 3hz), which is great news for a handwind  calendar watch. I also appreciate the shape of the click and the contrast between the straight lines created by the Geneva stripes and the circular moving parts. The Millenary Quadriennium is a watch that imposes its presence on the wrist. Even more than its size (47x42mm) similar to that of 4101 or of the Minute Repeater, it is its shape which gives the impression of an imposing case. However, the size remains well balanced and nothing goes beyond the wrist thanks to the very curved horns. The watch being well positioned on the wrist, is worn with comfort and without any concern. Due to its off centered dial, it is however more suitable for those who wear the watches on the left wrist. In conclusion, I have mixed feelings about this new Millenary. Its strengths are obvious: its style, its design, its finishings, its animation dial side are keys to success. However, the rather delicate legibility of the date, without mentioning the tiny month window spoils a bit the pleasure especially in the context of a calendar watch.

Thanks a lot to the Audemars Piguet team for its hospitality during the 2015 SIHH.

Pros:
+ The successful design, very close to the Minute Repeater one
+ The quality of the finishes
+ The show offered by the balance whel
+ The long power reserve (7 days)

Cons:
– The legibility of the dial especially of the calendar data
– Is the Millenary the proper context for a calendar watch? This message has been edited by foversta on 2015-02-09 12:48:25 I like your last question – is the Millenary the proper context for a calendar watch.  For this one, maybe so, as again the leap year calendar is a bit different.  Still, it is a curious selection.  These complicated Millenaries have a somewhat chaotic layout, which is why they are so delightful to me.  To place the calendar cutout windows at 12:00 and 6:00 (kudos though for correctly being sized differently) does not seem so consistent with the rest of the design.  It does however make me think of the Cabinet # 5 Millenary piece, and that is a good thought

Big picture – it looks amazing in the wrist shot.  And is that not the most important aspect for a Purist who will enjoy the watch?  Really, it is sensational.
I have long professed the titanium Millenary Minute Repeater as one of my favorite single AP creations.  This new Quadriennium is a step below for me, but it is absolutely gorgeous and a star of the show for Audemars Piguet.

Thank you for this special report.
No message body