Ressence is an unusual watch brand. It doesn’t come from Switzerland, Germany, or even the Netherlands, but from Belgium. The watches do not display time by means of hands, however they display time through a very unique system of planetary discs and the setting / winding mechanism is integrated in the caseback. Clearly, this young startup brand doesn’t want to do things in the traditional way. For their 5th anniversary, you should also not expect a super exclusive and ultra-complicated limited edition. Instead, the first of their creations comes in a prototype-like look and a raw finish, and that’s kind of cool! Here is the Ressence Type 1 V Genesis.

The concept is simple but goes against every previous idea you had from the luxury world of high-end watchmaking. To create the Type 1 V Genesis, Ressence uses parts taken directly off the production line, meaning that once machined, no treatment or finishing is applied or executed. Parts are left as raw as a machine would have created them. Don’t expect any beveling, polishing, straight-grain brushing or decals. This watch is voluntary brutal and raw. Some would say it’s a Ressence in its purest expression – the wish of the brand while creating it – and some would say it lacks details and finishing. The only thing you’ll spot when looking closely at this watch are some possible traces of machining. 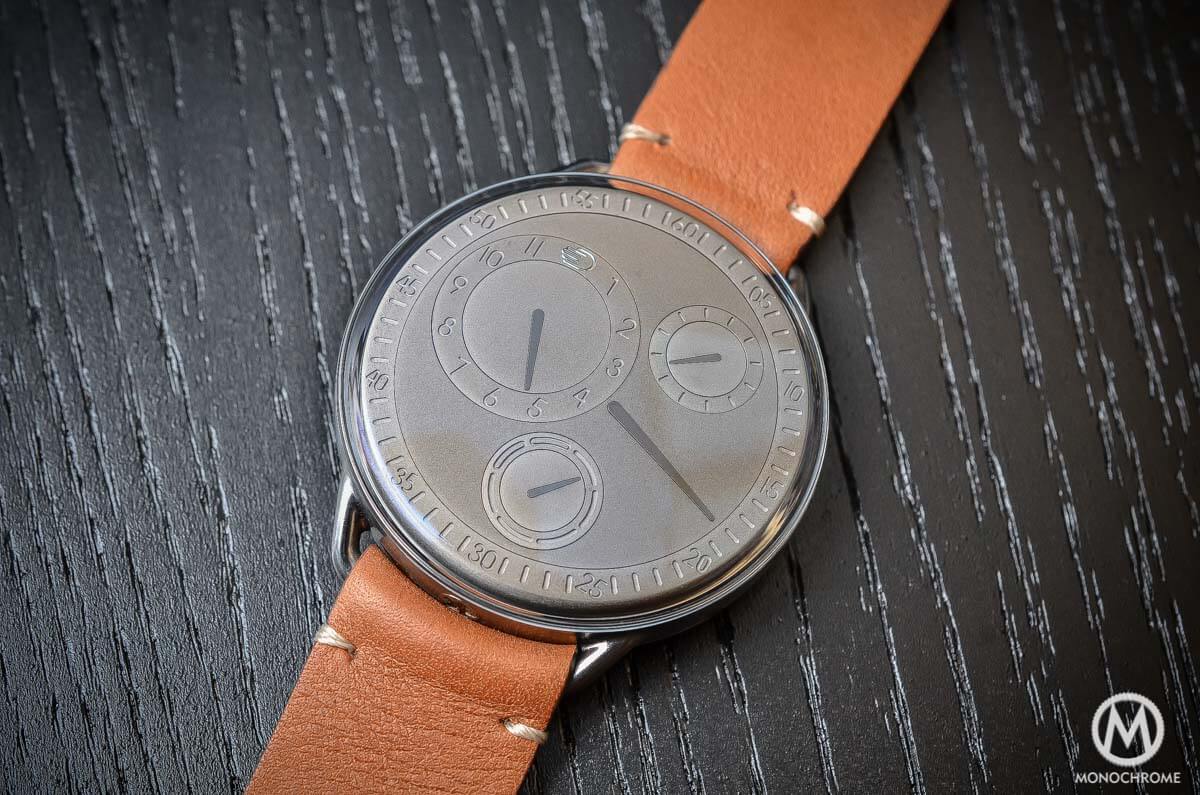 The 42mm titanium case of the Ressence Type 1 V Genesis indeed bears the marks of the milling process (done by a multiple axis milling-machine). The case is taken off the machine once executed… and left as it. It means that the flanks for example – even if clean and soft – are not brushed or polished but just showing some discreet machining scars. Same goes for the seamlessly integrated lugs: the junction between them and the case also shows some imperfections. 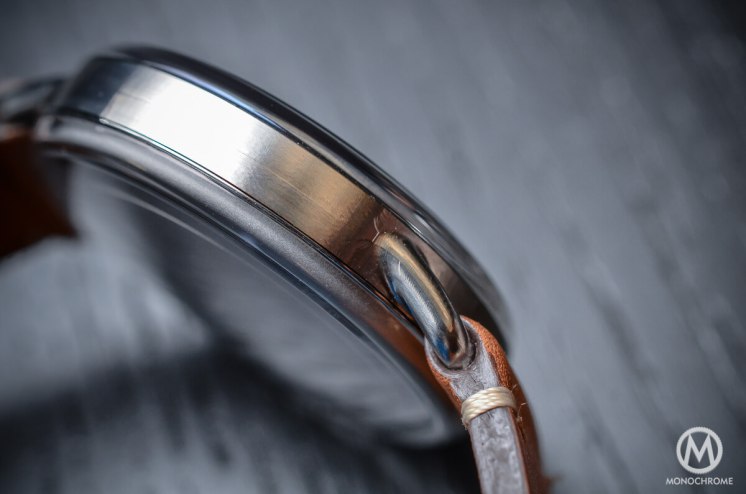 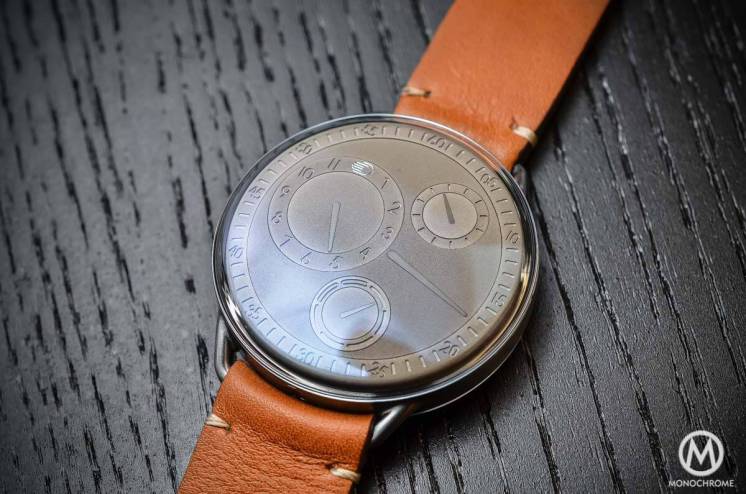 The same concept is applied for the dial, that comes in a minimalistic and raw design, however this time with a minimal finishing. The dial’s main plate (that rotates once every 60 minutes) and the smaller discs are finished with a simple sandblasted surface that is then nickel silver plated. There’s no lacquer, no applied or painted indexes. There is no Super-Luminova on the indices and markings, which are engraved on the dial. Only the 4 ‘hands‘ are galvanized to obtain a contrast with the dial’s main plate and smaller discs. 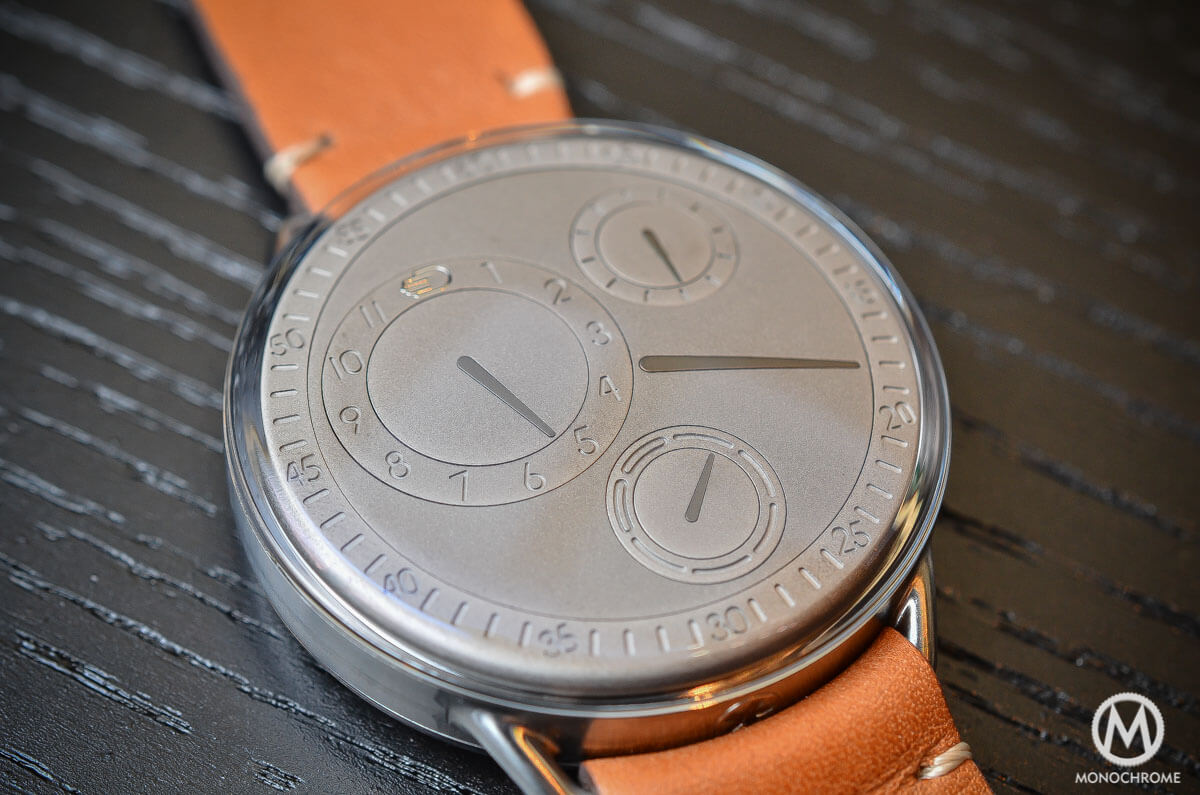 Clearly, the result is impressive because when explaining this project, you’d barely have the idea to wear such a piece of ‘raw horology’. The lack of finishing is usually an obstacle in the choice for a watch – and Ressence don’t come cheap. However, there is something properly attractive with the Genesis. This concept of a prototype-like watch matches perfectly with the idea behind the brand: a minimalistic, off-centered state-of-mind. Not only does it give the Type 1 a strong visual impact but it feels like the whole concept of the brand ‘matured’ – a sort of pure and unmolested edition for the first jubilee. 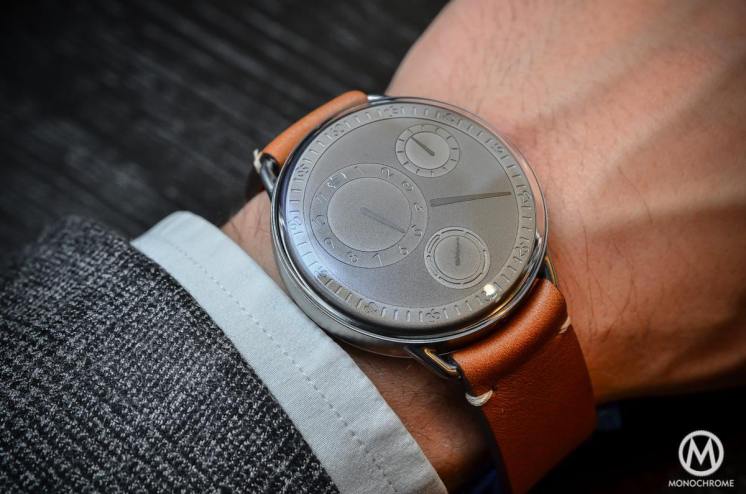 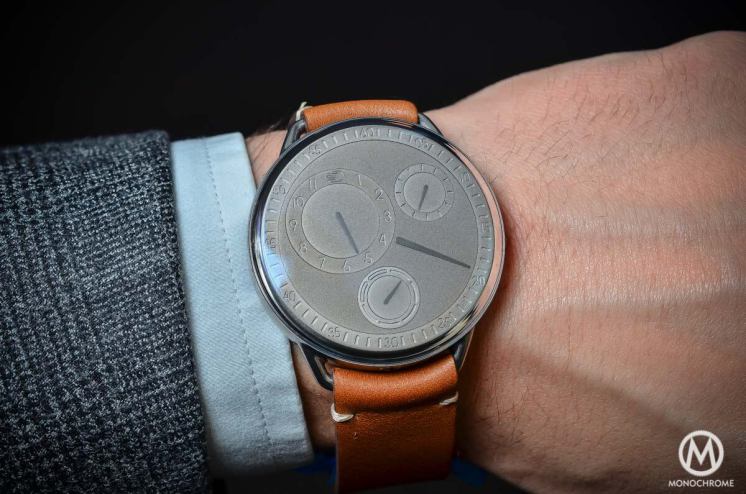 The Genesis will be available in a very limited run of 5 pieces only, priced at 18.750 Euros (before taxes). More details on Ressence.eu (take a look at the animation to understand how this watch works).

Art on the Dial – Benzinger by Zanella
Tags: Independent Watchmaking