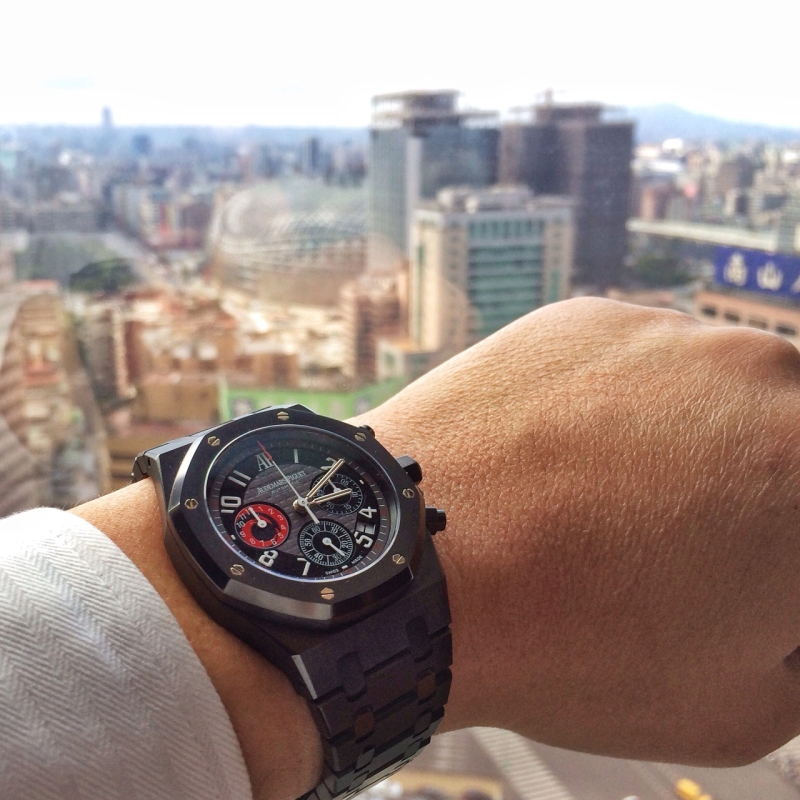 Thanks, A.L.B., for the inspiration, anytime is a great time for an AP wristshot!
One of two original complete Royal Oak Chronograph prototypes that launched a doomed project exploring the limits of treatments on stainless. This was not just PVD, DLC, or even ADLC (though those processes were explored too, way before they were commercialized within the watch world)
The first two “proof of concept” pieces are now over 10 years old, and this one has been around the world more than 20 times, sailing on the Hydroptere on the Cote d’Azure just outside Cannes; driving  Romain Grosjean’s back up F-1 car at Paul Ricard and the Hungaroring; qualifying for a racing license in open wheeled open cockpit Skippy cars; helping keep time as its wearer flew down the road at 178mph as part of the aerodynamic aids of a Honda VFR1200;
basically just living life…
In the picture above, just chillin’ down the street from Taipei 101…
not bad for a fairly active life, eh, wot?
I just wish my body was in nearly as good shape…

This message has been edited by ThomasM on 2015-02-06 02:25:41 I see it’s been in good hands! What an amazing piece you have there!!!
Thanks for YOUR continual inspiration on this website!!!
HAGWE,
SebastianThis proto definitely has led a very full and adventurous life…
its sibling, alas, has been mostly a safe queen…and amazingly, like a great sportscar, the one that has actually been used as it was meant to be, racing, flying, traveling, keeping time, is running better than the safequeen, looking no worse for wear!
HAGWE

No message bodyAli Baba’s cave, where all sorts of unknown treasures await… Thanks, Thomas, I needed that this morning. :0)

I continue to admire the Royal Oak Chronograph (alas, from a distance).  This black prototype is simply awesome looking especially considering the life it has led.

It is always so interesting to hear that a watch has accompanied its owner on adventures and, as you say, enjoyed life.  I have a watch that accompanies me on most of my travel and adventures (albeit far less adventurous than yours).  It even shares the same movement with your AP prototype, if I am not mistaken. Living with a watch in this way certainly creates memories and increases the bond with the watch.

Thanks for sharing this special photo TM!
No message bodyNo message bodyCool to see it get some wrist time.
Regards,
ED-209
Remember that series 2 proto in the tram high over Hualien, Taiwan?